Quarterly Labour Force Survey is the definitive source for most sectors, but not for mining

Our article How employment has changed in 10 years (13 Feb) used data from Stats SA’s Quarterly Labour Force Survey (QLFS) for the table and graph. The QLFS is the most reliable source of employment statistics, but it has a serious flaw: its mining employment data is wrong. It states that the number of mining jobs rose 13% between the first quarters of 2008 and 2018, from 353,000 to 397,000.

In fact, more accurate data, for mining only, is available in the Quarterly Employment Statistics (QES). This paints a very different (and glummer) picture. It reports a 13% drop over the same period, from 519,000 to 454,000 jobs.

There are many methodological differences between the QLFS and the QES summarised in the table below taken from Stats SA.

Generally the QLFS is superior to the QES. The latter obtains most of its data from a survey of 20,000 non-agricultural businesses. But its mining data is obtained from the Department of Mineral Resources which every month surveys every operating formal-sector mine in the country.

The QLFS mining employment data, for various reasons including difficulties counting mineworkers living in hostels, has historically been very inaccurate.

It has improved since a change in methodology in 2015.

Up until that improvement this note used to appear in the QLFS:

Mining is a very clustered industry, hence the industry might not have been adequately captured by the QLFS sample. For more robust mining estimates, please use the Quarterly Employment Statistics (QES).

The note no longer does appear (even though some researchers have asked that a note remain). But although the data since 2015 more closely matches the QES, the data before then is wrong, making the estimate of long-term trends, like the one we published, wrong too. 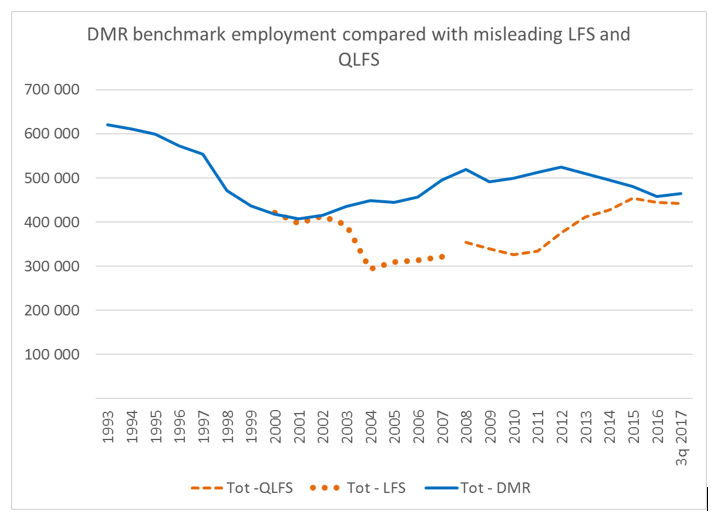 We used to include this note in the QLFS report until Quarter 1 2016: “Mining is a very clustered industry, hence the industry might not have been adequately captured by the QLFS sample. For more robust mining estimates, please use the Quarterly Employment Statistics (QES)”.

So, the mining estimates from the QLFS should be close to those produced by the QES. In the 3rd quarter (Jul-Sep) of 2018, QLFS reported 406,000 people employed in Mining and the QES reported 457,000. What is important is that the patterns observed over time for the two survey are the same.

Previous:  Expropriation Bill: it’s rural black people who are most at risk