Vigilantes accused of throwing families out of RDP housing

On a stifling afternoon in Johannesburg’s Alexandra township, Colletha*, a 45-year-old single mother, emerged from the back room of her small, meticulously ordered home with a slim blue plastic folder that contained her most important documents.

Among them was her late husband’s death certificate, her South African ID, and a letter of authority stating that she was the beneficiary of her husband’s estate, most notably the RDP house that he’d been allocated in 2006.

Having lost her husband more than a decade ago, Colletha now faced losing the home they had intended to share together, on the cramped eastern edge of Alexandra next to the busy N3 Bypass.

Colletha said that in early February a local “vigilante” group called Bonafide Organization, which has been accused of illegally evicting dozens of foreign nationals from RDP houses in Extension 7 since mid-November last year, had told her that she was on their list for further evictions scheduled for the coming weeks.

Colletha’s father was from Zimbabwe, but her mother, who he married in the early 1990s, is South African. “These people still see me as a foreigner,” Colletha told GroundUp. “They don’t care if you have the right papers or not. They just tear them up and tell you to leave, or they threaten you with violence.”

When GroundUp visited Extension 7 in early February, a number of brick RDP houses stood vacant within a few minutes’ walk of Colletha’s home. The doors and security gates were welded shut and some of the belongings of their former residents, including couches and bags of clothes, had been left behind on the side of the road. Local residents told GroundUp that as many as 20 households had been evicted. They said that most of those evicted had not been seen since.

“These people were thrown out like dogs,” said Lucas*, who lived next to one of the recently evicted families, and claimed that he had also been threatened with eviction. He said both South African and foreign residents were afraid to talk to the media or the police about the evictions for fear of retribution. “People are very scared,” he said, “and it’s only going to get worse. It’s becoming a war.”

Sipho Khothlakala, a local ANC member, said that as many as 50 men would come to houses they had identified for eviction, armed with guns and other weapons, and use force if any resistance was shown by those being evicted. “We as community leaders tried to intervene, but it seems like this thing is bigger than us,” he told GroundUp.

Khothlakala said that a Zimbabwean man had been killed during evictions in December and as many as seven immigrants had been hospitalised due to injuries they sustained. At the time, SAPS confirmed that they were investigating 11 cases, including illegal evictions, malicious damage to property and theft. In late January, 12 suspects were arrested in connection with these investigations, though all have since been released on bail, with a court date scheduled for 6 March. 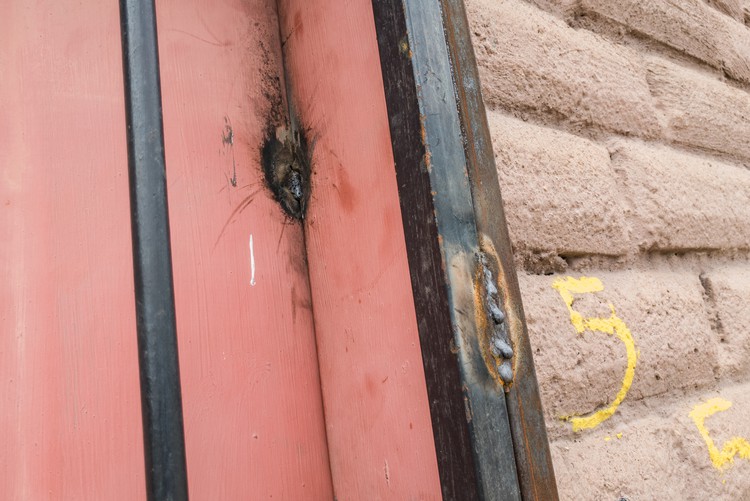 A number of the RDP houses that have been evicted have been welded shut to prevent evictees from returning.

Duma Kulashe, the founder of Bonafide, was among those arrested in connection with the evictions. He maintained that his organisation has only sought to evict foreign nationals who have illegally purchased RDP houses. He disputed claims that members of his group are armed. “We do not operate in a violent manner,” he told GroundUp. “If people cooperate there will be no problems, and we feel that government should also participate in this effort,” he said.

But Mr. Khabo, a local teacher who declined to give his first name, said that most of those who had been evicted were dual citizens who had all the papers showing legal ownership of their RDP houses. Bonafide, Khabo said, had allocated the emptied houses to members of the group who were not on the housing list and had no legal right to them. He also said that the group had begun evicting foreign tenants renting rooms from South African landlords.

“This thing of them only targeting illegal people is a total lie,” Khabo said adding that Bonafide routinely used violence during the evictions. Khabo claimed that he had been assaulted and shot at by members of Bonafide for publicly opposing the group’s actions. He showed GroundUp cell phone pictures of his bloodied face after the attack.

Lebo Keswa, a spokesperson from the Gauteng Department of Human Settlements said that the Anti-Fraud Unit had compiled a list of 42 RDP houses in Alexandra that were believed to be under illegal occupancy by immigrants and was “working with Home Affairs to confirm nationality and the validity of the nationality.” However, she declined to answer GroundUp’s questions concerning the illegal evictions.

Local residents said there had been no attempt by government to resolve the issue. “They are nowhere to be seen,” Colletha said emphatically.

Kulashe insisted that “people are benefitting from housing who should not be, including foreign nationals, while others have been waiting on the list for many years and still don’t have houses.” Although beneficiaries of RDP houses may sell their property to anyone regardless of nationality after eight years of occupancy, Kulashe said that many houses were sold illegally after much shorter periods, often to foreign nationals. 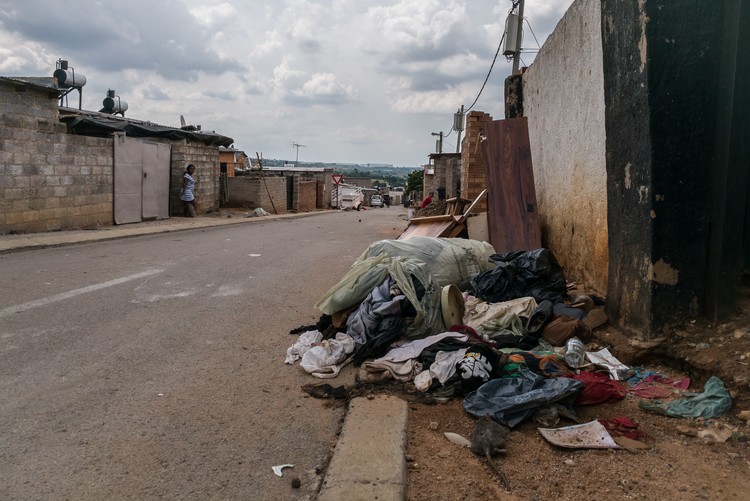 Belongings of residents evicted from an RDP house in Alexandra’s Extension 7 lie on the side of the road.

This is not the first time this issue has sparked tensions in Alexandra. In October 2011, the Mail & Guardian reported that South African residents were threatening to take the law into their own hands and drive out foreign nationals living in RDP houses. At the time, Bonafide drew strong condemnation from local government for distributing incendiary pamphlets and posters that gave foreign nationals seven days to vacate RDP houses.

Kulashe warned that the longstanding tensions between South African residents and foreign nationals over housing in Alexandra could “continue to escalate” in the run up to general elections in May.

According to Sharon Ekambaram, manager of the Refugee and Migrant Rights Programme at Lawyers for Human Rights, political parties and the police have been guilty of stoking rising anti-immigrant sentiment in an area that was at the heart of the xenophobic attacks that claimed dozens of lives in 2008.

“It’s very concerning, given such a history, that for the first time in a South African election the scapegoating of immigrants in such places is being used as a political tool by all parties,” she said.

Most recently, on 18 February, in response to a Tweet complaining about service delivery in Alexandra, Johannesburg Mayor Herman Mashaba tweeted “Please assist us to get @HomeAffairsSA to deal with undocumented foreigner (sic) national in Alexander. Uncontrolled number of people in Alex is a challenge way beyond the @CityofJoburgZA competency.” 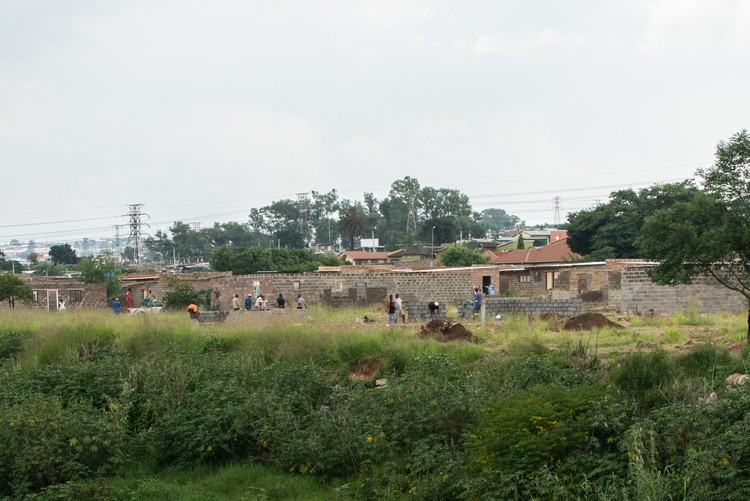 Just across the Jukskei River from Extension 7, a burgeoning land occupation threatens to become another area of conflict.

A local taxi driver in Extension 7 who preferred to remain anonymous said that a burgeoning land occupation in Marlboro Gardens, just a few hundred metres away on the other side of the rubbish-strewn Jukskei River, could become the next site of conflict between South African residents and immigrants. He alleged that there were many foreign nationals among those building houses there in defiance of a court order.

“This xenophobia thing is going to keep spreading to other areas, especially if there is land or new houses there for the taking,” he told GroundUp. “But I don’t think all the foreigners are just going to lie down. There’s a fight coming. People are going to get killed.”

In the days immediately before Kulashe was arrested, a woman believed to be the wife of another of Bonafide’s leaders was shot dead at home in what many residents claimed was a retaliatory attack by some of the evicted foreign nationals.

Back in her living room, Colletha nervously rearranged the various bits of paperwork pertaining to her house, slid them back into her blue folder and returned it to a safe place in her bedroom. “There are rumours that after the elections, things are going to get even worse,” she said. “But where must I go? I have nowhere else.”

*Names have been changed to protect their identity

Next:  Toilets overflow and taps run dry in Enkanini