“We’re not here to criticise the municipalities. We’ve tried it for years. It doesn’t solve anything.” 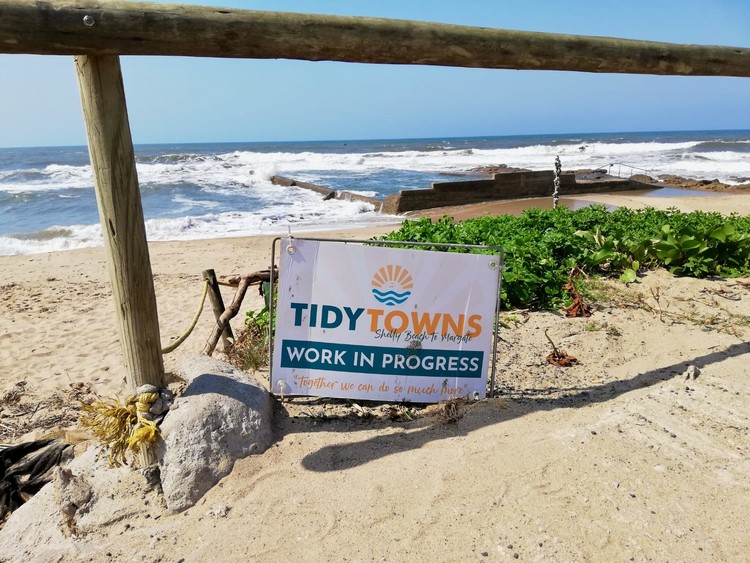 Tidy Towns places these sign boards to alert tourists about the initiative to keep the area clean, but also to educate the public about civic pride. Photos: Benita Enoch

Hundreds of business owners on the KwaZulu-Natal South Coast have had enough of waiting for the Ugu District and Ray Nkonyeni Municipalities to restore basic services to their region.

In September, GroundUp travelled to the area to investigate claims by residents that many businesses were going off grid to survive.

Vicky Wentzel, owner of tourism company Southern Explorer, said the most commonly asked question from the public is: “Do you have water?”

Wentzel said many establishments have now secured their own water and electricity supplies on site. “Today, you could be at a restaurant and you would be none-the-wiser that there has been a cut of water or electricity because of the back-up systems in place.”

For instance Coral Tree Colony, a bed & breakfast in Southbroom, has two 5,000-litre water storage tanks. Owners Dave and Liz Page use rain water and store municipal water in the tanks when there is supply. The rain water is used for external purposes such as cleaning and watering the garden, while the stored municipal water, which has to be purified, is piped for consumption.

“And we have the pool,” the pair say in unison. Once used for entertainment it is now a worst-case scenario solution to no water supply. They already used it for laundry three years ago when there was an extended water cut. 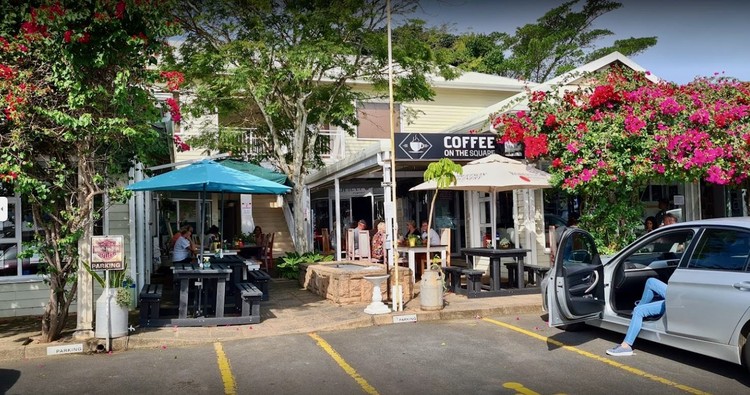 The water fountain at Coffee on the Square has form and function. These days it is used to collect rainwater which is then purified and used for cleaning and maintenance.

Southbroom town square is home to a coffee shop, pizzeria, hardware store, supermarket and a hairdresser.

Barry Barnard owns Coffee on the Square, a shop that survived the numerous Covid lockdown levels. He said South Coast business community members are close-knit and help each other.

“During lockdown when we were battling to keep the place open, a businessman offered me R250,000 just to keep my shop open,” Barnard said, visibly moved by the recollection.

Barnard has diverted gutters to a water fountain at the entrance to the shop and turned it into a 2,000-litre rainwater reservoir. The water is purified with chlorine and is used to maintain bathrooms and floors.

He said businesses on his street are looking at forming an urban improvement scheme that will do such things as fix potholes, clean up verges, and even hang Christmas lights during the festive season.

Stephen Herbst, co-founder of Tidy Towns, has taken on the challenge of making the south coast back into the attractive holiday destination it was once.

The organisation is funded solely through public donations and is audited. It is seeking urgent approval from the Ugu District Municipality and Ray Nkonyeni Municipality to take on repair and restoration work that the municipalities cannot undertake.

“We’re not here to criticise the municipalities. We’ve tried it for years. It doesn’t solve anything,” said Herbst. “Our motto is that we are driven locals with a ‘can-do’ attitude and if the municipality works with us, we will be able to collectively rehabilitate the South Coast.” 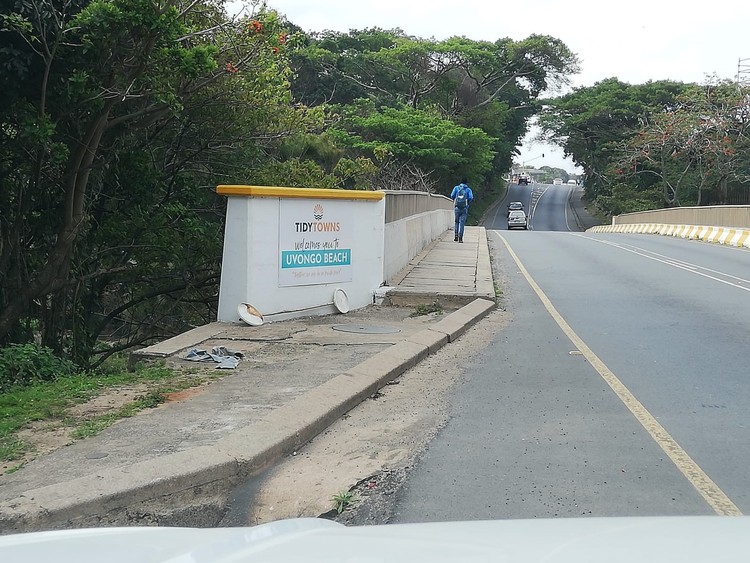 Tidy Towns has the backing of the municipality to maintain, repair and restore public areas, like this bridge at Uvongo which needed its chevron repainted.

It runs daily refuse collections to ensure bins do not overflow with rubbish, and all walkways have edges that are trimmed and trees cut back.

From Uvongo beach to Ramsgate, Tidy Towns has reclaimed formerly dilapidated public spots and restored them. The beach showers, for example, were reslabbed for drainage which has stopped moss growth. A fish gutting station is now maintained and cleaned every day. Informal car guards have been given uniforms and are paid a daily wage to keep their areas safe and clean.

Andrew Gumede, a Tidy Town worker stationed at Laguna La Crete in Uvongo, said the organisation rescued him from alcoholism. He said he was given tourism training and training in professional landscaping. Gumede manages the car park and also the rock garden at the entrance to the beach.

Driving around the South Coast, Tidy Towns’ boards can be seen in areas with freshly painted roadside chevrons, and at many sites that have been cleared of litter and storm-related debris.

“We even have special ‘stompie bins’ at regular intervals for smokers to put out their cigarette butts,” said Herbst.

Herbst said they also work with law enforcement and have shut down several drug dens.

Besides a man in a wheelchair, there were no beggars at road intersections along the beach routes. Beggars are repeatedly asked to leave the area. Tidy Towns also has patrols that tell waste recyclers to re-tie trash bags and not to leave rubbish strewn about once they have finished sifting.

A group of retired engineers monitor the water reservoir levels. They then inform residents using WhatsApp, which enables the community to plan ahead and minimise the inconvenience caused by the disruptions. 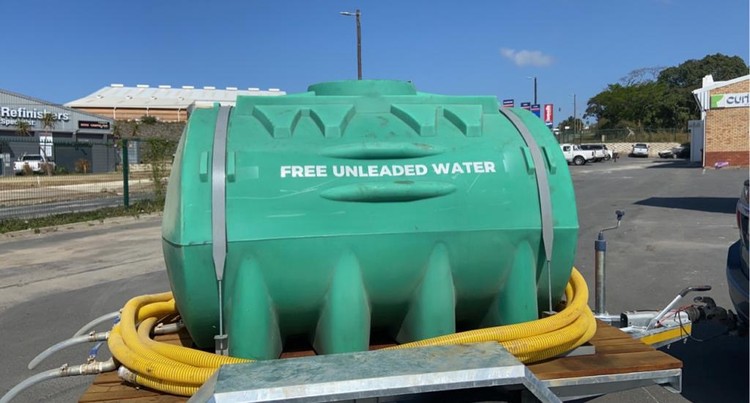 Haroon Mahomed paid for a borehole to be sunk at the petrol station he owns and he offers people free water.

It is not unusual to see boreholes being sunk in business areas. In Margate, Haroon Mahomed paid for a borehole to be sunk at the petrol station he owns. He advertises “free unleaded water” as an invitation to the public to take water when needed.

Workers on their way home stop by to take a few litres home in case the municipal water tanks are empty.

Debra Robins, the publisher and editor of Odyssey magazine in the region said team spirit was evident among south coasters. She said while the challenges they face are formidable, residents’ response to the crisis has been heart-warming and indicative of the hospitality found in the area.

Ray Nkonyeni Municipality spokesperson Simon April said it was a well-known fact that government does not have enough funds and resources to deliver services as quickly as people may desire, and partnerships with organisations like Tidy Towns assist in addressing such challenges and they are encouraging.

“This initiative by Tidy Towns is apolitical and to the benefit of both communities and the municipality,” he said.

Margate: the truth, not the myth

The popular coastal town of Margate situated on the Lower South Coast of Kwa-Zulu Natal has always been the main centre of attraction and action for locals and holidaymakers. It is the perfect destination for families and tourists.

All the swimming beaches are currently open for swimming and get tested regularly by authorities for any inconsistencies.

All stakeholders and role players have joined hands to ensure Margate grows, remains safe, and is clean.
Our local municipality is also assisting us where possible and we have a good relationship with them.

Margate has had no water interference problems for a few months now, and all local businesses and residents have a good consistent water supply from the local UGU municipality. As with the rest of the world, some establishments and residents have made provision for storing additional water supplies, should the need arise, but there is absolutely nothing wrong with our level of service delivery in this part of our paradise.

It is untrue that we collect water in Margate CBD in bottles and are not connected to our municipal water.

MARGATE CBD HAS NO WATER ISSUES

As the rest of the country, and now the world, is facing challenges in electricity supplies, we of course have the schedules. Our local business owners, restaurants, holiday establishments, and shopping centres have made provision for the interruptions of Eskom, when they happen, and the minute the power goes off, the generators kick in, without any inconvenience to the guests.

We welcome all, keen on sharing this jewel with the world.