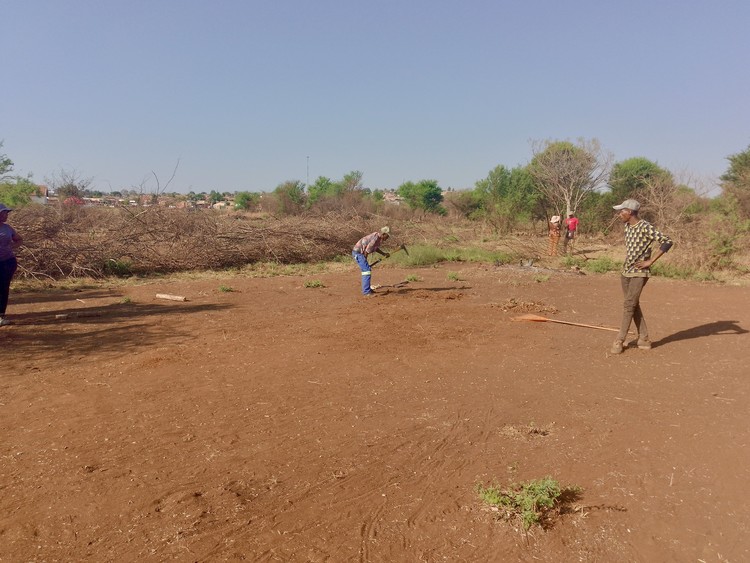 The EFF has been distributing plots to land occupiers in Ga-Rankuwa Industrial area, Tshwane. Above, Keabetswe Moopeola stands where his shack was before metro cops removed it. Photo: Chris Gilili

There have been persistent land occupations of municipal land in Ga-Rankuwa Industrial area, Tshwane, for the past two weeks, despite the City’s efforts to stop people.

“The government has dismally failed to deliver housing to the people. That is why we decided to take over this land and give it to the people. This bush has been a crime den for over 20 years,” said Mathe.

Mathe said they have distributed 439 out of 500 stands for occupation by residents of Ga-Rankuwa, Hebron, Kgabalatsane and Rockville.

On Wednesday, Tshwane metro police removed 17 shacks and 35 structures they say were not yet occupied.

But Keabetswe Moopeola said he was already living in his shack with his son and girlfriend. “They kicked down our door and the shack itself,” he said. He said his four-year-old son was injured in the eviction and he intends to bring a case against the City.

Moopeola said he will rebuild.

When GroundUp visited on Thursday, people were busy digging holes for poles and preparing to build shacks. Some were clearing scrub with axes.

“We are not going to back down from this. We have been silent for too long,” said Mathe.

Rabugwe Kgari, who joined the occupation, said people are unemployed and large families are crammed into small RDP houses, because people cannot afford to rent their own place. Yet here was a huge area of land sitting unused.

Chief of staff for the mayor, Jordan Griffiths, told GroundUp the land is not earmarked for any developments.

In a statement on Thursday, the City of Tshwane said it has taken a zero-tolerance approach on land occupations and will continue to demolish and seek eviction orders.

“Land invasions have an adverse effect on our programme of building sustainable human settlements and further erode the property rights of all residents in our City,” said the statement.