MeerKAT is tuning into thousands of “radio channels” at a time

The most sensitive telescope in the southern hemisphere, MeerKAT, is tuning into thousands of “radio stations” in search of signals from galaxies and phenomena never explored before.

Remember the days when you had to fine tune the radio manually to find your favourite radio station? Sometimes you just could not get a clear sound. There was background noise, or it seemed you were stuck between radio stations. MeerKAT has thousands of such “channels” to search, in the hope of tuning into faint signals from far off galaxies or exotic pulsars.

This 64 dish radio telescope, 90km from Carnarvon in the Northern Cape, is the precursor to the Square Kilometre Array (SKA). MeerKAT will become part of the SKA when it is complete.

Dr Sharmila Goedhart, commissioning manager of MeerKAT, explains that MeerKAT has eight large survey projects lined up, each allocated to different teams with different scientific objectives. There are also some smaller projects.

Search for the beginning of stars

To understand how difficult this is, consider trying to find the gas in a spiral galaxy. Such a galaxy has different “radio channels” or frequencies because different parts of the galaxy move at different speeds. Some parts are speeding away from us and other parts are moving towards us. There are a whole range of speeds within one galaxy, and on top of that galaxies can pull material from each other because of gravitational influence.

To observe this, the MeerKAT team is using 4,096 “channels” during the first phase of the project. “We are fortunate if we find a signal from a galaxy in four or five of these channels,” Goedhart says.

The next phase, which the team will develop will scan 32,768 “channels”. This will allow many more galaxies to be scanned. 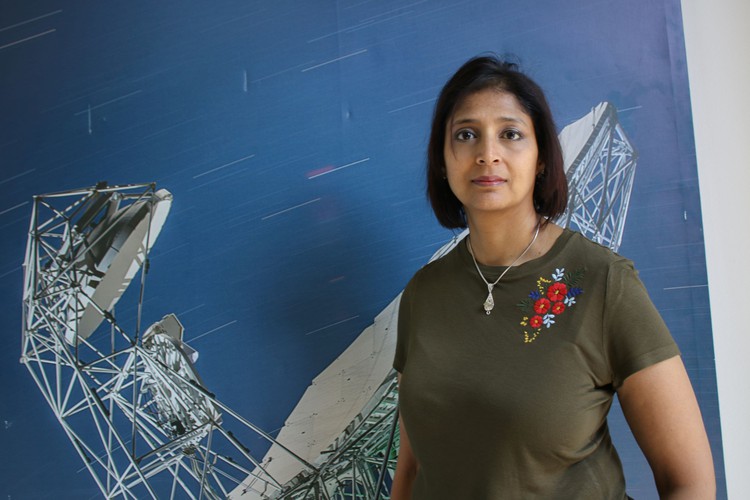 The observations create a huge amount of data (up to eight terabytes in an evening sometimes – about 16 hard drives on a standard laptop). Processing this is a huge challenge. The data is sent to a site to the Karoo Processing Building a few kilometres away. It is five metres underground to protect the signals from radio frequency interference. A massive, double steel door blocks the entrance to this big data sanctuary.

There is enough space to store the raw data for six months. A special processor has been developed to work in real time to produce images from all the frequency channels. The processed data is streamed via optical fibre to the Centre for High Performance Computing in Cape Town. Researchers then have access to the data, which is still massive.

“It can take up to a week to create a simple image. It can take months to work through the data of one evening’s observation. You have to develop a feel for it. That is why we distribute the data to students so they can get used to working with it,” Goedhart says. 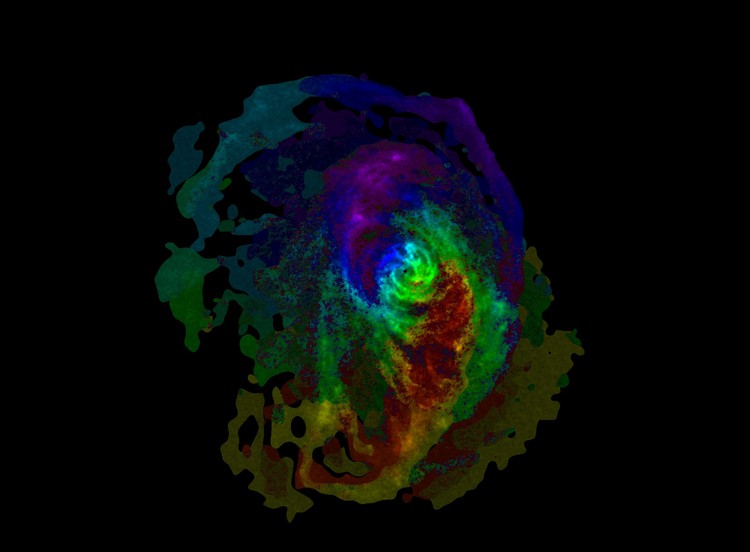 This image shows the M83 galaxy, colour coded according to the velocity of the gas in each location. From this we can see that not all of the galaxy is moving at the same speed. Astronomers can use this information to calculate the mass of this galaxy. There are basically only seven colours in this image, whereas if we had finer channels we would be able to see finer details on how the gas is moving and interacting with the rest of the galaxy. Image: Sean Passmoor/SARAO

Prof Patrick Woudt, head of the astronomy department at the University of Cape Town, is the co-principal investigator of a project called MeerLICHT.

MeerLICHT is a new optical telescope, based at Sutherland, that simultaneously scans the southern skies together with MeerKAT. The telescope is actually an automatic robot that scans the sky and takes a picture every minute. As soon as it as it sees something of importance it sends a message to astronomers across the world to be on the lookout.

MeerLICHT started operating in May 2018. The telescope was built in the Netherlands. It can see objects one million times fainter than is possible with the naked eye.

A project called ThunderKAT uses MeerKAT, MeerLICHT in Sutherland, as well as its big sister, the Southern African Large Telescope (SALT), and some smaller telescopes on site to observe the same target.

Shortly after operations started a binary system (a system with two stars – imagine if we had two suns) was discovered. Woudt said they also expect to find two planets in this system.

In January, MeerKAT, Salt and MeerLICHT observed a highly energetic gamma-ray burst. This is unusual, explained Woudt, because it is the first gamma-ray burst to be detected at very high energies. These bursts occur when a massive star collapses into a black hole at the end of its life. This particular event occurred 4.5 billion years ago, about the same time that the earth was formed. “We are able to see the event unfold in ‘delayed real-time’ as light from this event has now reached us,” Woudt says.

Looking at lighthouses in the sky

Sarah Buchner works on the MeerTime project, which times pulsars using MeerKAT. She explains that a pulsar is a rotating neutron star. A neutron star is a dead star, the mass left behind after a star explodes (known as a supernova).

These stars have more mass than our sun but they are a mere 20km across. One teaspoon of neutron star matter would have the same mass as all humans on earth, Buchner says.

The fastest known pulsar rotates at more than 716 times per second. Pulsars are very useful for studying gravity. 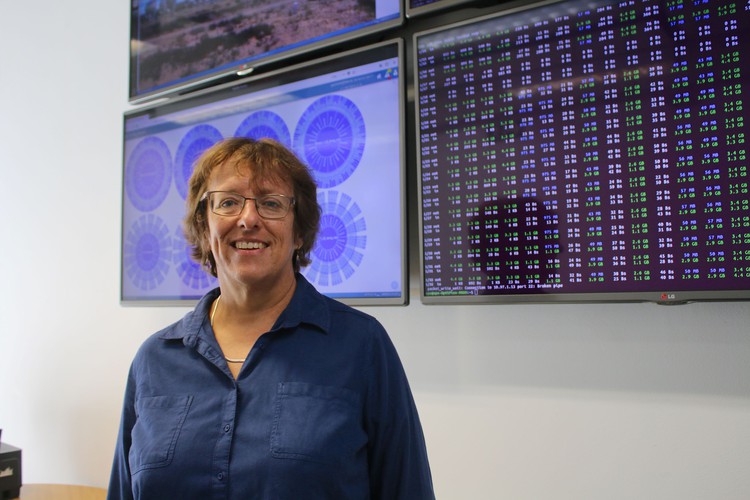 “A pulsar beams radio waves from its magnetic poles. These beams sweep through the sky like a lighthouse. As the beam sweeps past Earth we detect a pulse of radio waves, so we see one pulse for each rotation of the pulsar. We can measure the time that this pulse arrives at Earth very accurately, and then work out how fast the pulsar is spinning and look for tiny changes in its rotation rate,” explains Buchner.

On 12 February Buchner and her colleague Martinus Steyn started observing remotely from the South African Radio Astronomy’s offices in Observatory, Cape Town. A team of MeerTime members watched via teleconference. They were able to observe 15 pulsars.

This is just a small taste of some of the fantastic astronomy being conducted on South African soil. To delve deeper, go the SKA website: http://www.ska.ac.za/ 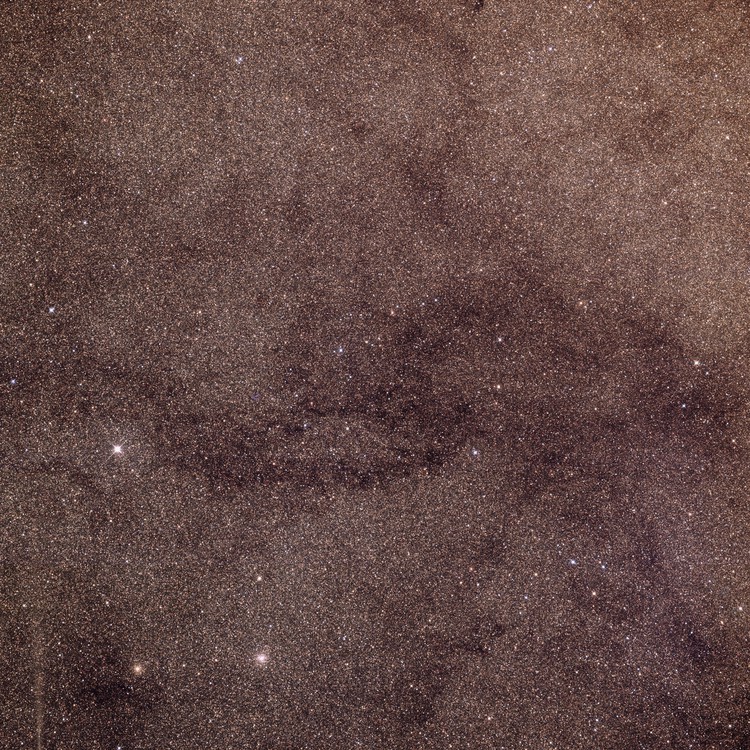 Our Milky Way Galaxy, captured by the MeerLICHT telescope, is home to one hundred billion stars. Photo: Charl Cater/MeerLICHT

Previous:  Home Affairs tells man to come back with his dead mother