South African youth take to the streets over climate change

Hundreds of youth in Cape Town and Pretoria marched on Friday to demand that the government urgently act on climate change.

About 300 people marched from Parliament to the City Hall in Cape Town to hand over a memorandum demanding government take “immediate action on the climate crises”.

The march was organised by the African Climate Youth Alliance and was part of the global Fridays for Future youth climate protest.

Protesters, the majority of whom were under the age of 18, marched through the city streets with placards chanting, “Hey hey, ho, ho, fossil fuels have got to go!” , “Save our planet” and “There’s no planet B”.

They want government to publicly declare that the climate crisis is happening; to place a moratorium on new coal, gas and oil mining licences; to have 100% renewable energy by 2030; and a mandatory education curriculum on climate change.

This follows a march on 15 March where thousands of school learners protested, calling on government to act against climate change.

A memorandum was handed over to Marian Nieuwoudt, Mayco member for Spatial Planning and Environment. 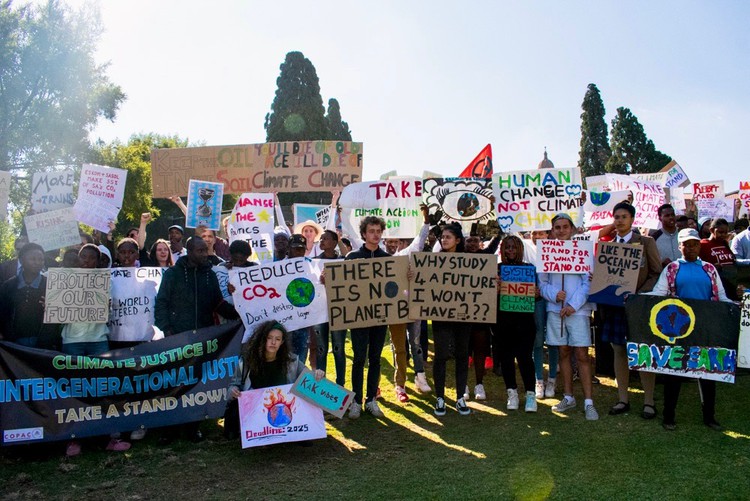 About 150 people, mostly youth, picketed at the Union Buildings in an attempt to put pressure on government to act on climate change. Photo: Ashanti Maluleke

In Pretoria, about 150 people, mostly youth, from various environmental organisations picketed at the Union Buildings in an attempt to put pressure on government to act on climate change.

Some of the organisations included 350 Africa.org, Extinction Rebellion, Walter Sisulu Environmental Centre and Co-operative and Alternative Policy Centre (COPAC). The Well Worn Theatre Company, an organisation that uses theatre to bring awareness to climate change, also performed at the march.

But high school learners, some still dressed in their uniforms, and young children were at the forefront of the picket.

One of the organisers from 350 Africa.org, Alex Lenferna, said the upcoming Youth Day on Sunday was an important day to reflect on issues that affected young people in South Africa and one of those issues was climate change.

“Climate change is one of the gravest threats to young people’s future … If we do not act, we will be leaving them a world that is ravaged by climate change,” he said.

Solomon Kutumela from the Walter Sisulu Environmental Centre said the centre brought some high school learners from Mamelodi township to the march.

He said it was important for the learners to be at the march because they were passionate about fighting climate change and the march was a space for their voices to be heard.

Kutumela said the centre focuses on teaching learners about waste, energy, water and biodiversity in Mamelodi. “It has also inspired learners to take part in marches like these and think about careers in sustainable energy and environmental work,” he told GroundUp.

One of the learners from Mamelodi East, 15-year-old Jeffrey Mashela, said: “I’m here today to show that the environment is very important to us and as the youth, we should think about the next generation and how it is going to be for them.”

He urged government to listen to the voices of the youth. “That is why we are here today, to make [the government] listen,” he said. 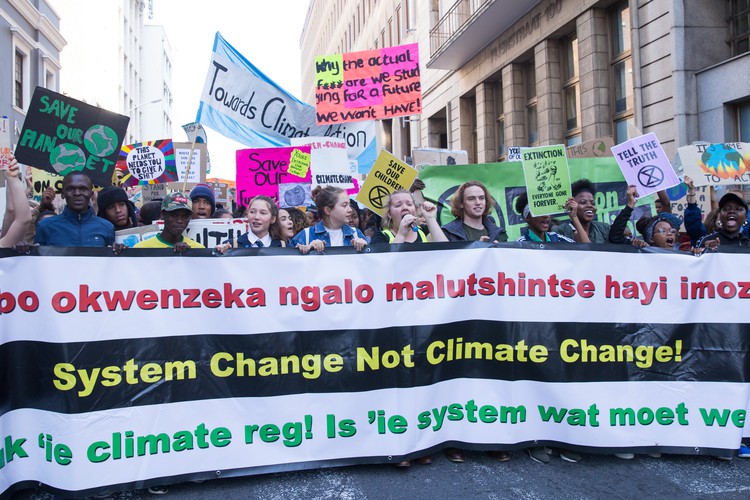 Another learner from Mamelodi, Dzunani Makwakwa, said the world is going to change in the near future if we do not address climate change. “If we don’t stand up as the youth, change is not going to happen … We have to show the older generations and the generations that come after us that we care about our environment.”

COPAC Executive Manager, Jane Cherry, said the organisation was calling for a “deep and just transition” that would ensure that workers who previously worked on coal mines would be skilled to work in sustainable energy.

“We also don’t want power to be transferred from one big multinational corporation to another one that owns solar energy … We want workers to benefit from these sustainable alternatives,” she said.

Cherry said COPAC was currently drafting a People’s Climate Justice Charter that it hoped would eventually be adopted in Parliament.

“We are currently hosting roundtable talks with different groups … We recently had one with drought affected communities and we’re still going to have talks with students, organisations, youth, labour and the media,” she said.

This was to table the various groups’ demands and include it in the document.

The memorandum was accepted and signed by Calvin Humbles from the office of the President. He said it would be acknowledged within seven days.

Someone from the crowd shouted: “That’s not enough … Our President was on the board of Lonmin so how can we trust him to care about the environment?”

To which Humbles responded: “Let’s wait and see.” 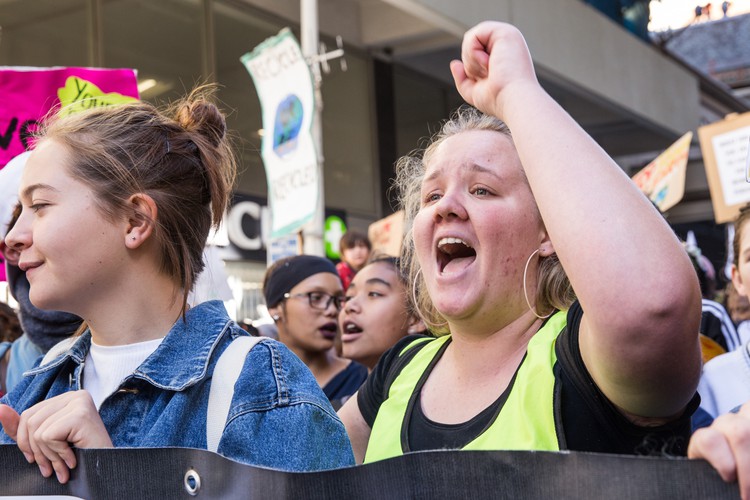 Ruby Sampson is a grade 12 learner from Wynberg Girls High. She is one of the founders of the African Climate Alliance (ACA) and head of ACA’s youth wing. After the protest in March, Samoson said that they heard nothing from government. She said that although the first protest was “fantastic”, they didn’t really achieve much. This time they are marching and going to hand over a list of demands “from the youth of South Africa to government”. Photo: Ashraf Hendricks 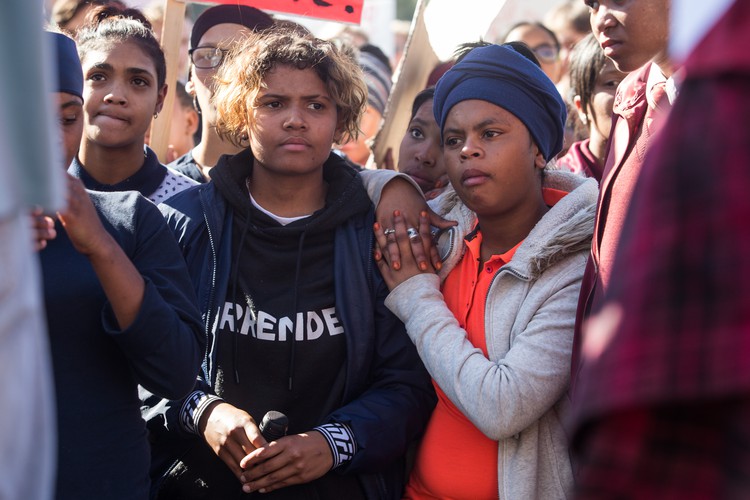 Nicole Anthony (left) and her friend Widaad Abrahams from Lotus High joined the protest. Anthony, who is 16 and in grade 10, said that she joined the protest because “we are the future”. Anthony said that if nothing changes there will be no food and “we will die”. When questioning Anthony on why there aren’t many adults at the protests she said that “they already got their time”. “We are the next generations” she said. Photo: Ashraf Hendricks 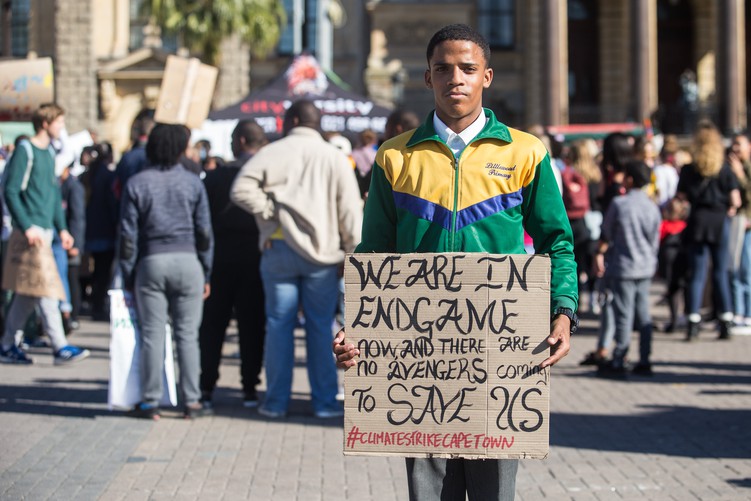 “I want change,” said Zaahir Jacobs, a 13-years-old Grade 7 pupil from Littlewood Primary School in Mitchells Plain. Jacobs said that we need renewable resources in our lives like “sun and wind power”. Jacobs said adults don’t realise the importance of the climate crises. He said that he wants adults to stand with the youth. Photo: Ashraf Hendricks 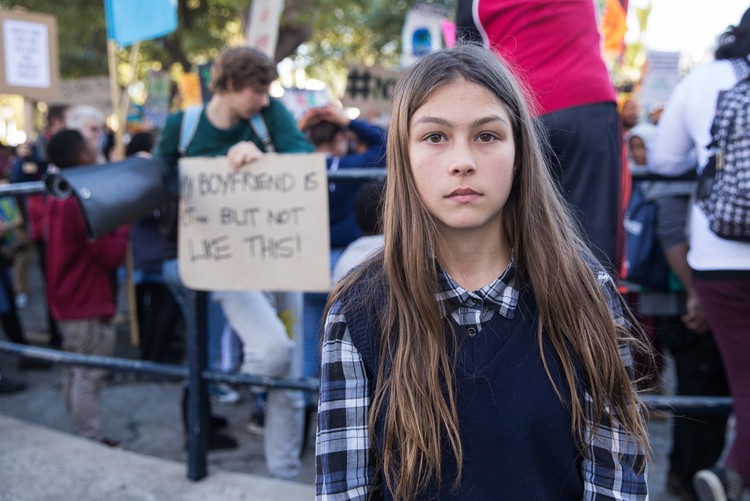 Lily Shaw said that she isn’t attending school anymore because she is on a “permanent climate strike”. Shaw is 13 and a youth organiser for Extinction Rebellion Mzanzi . She on a climate strike since the start of the year and has entered its 24th week now. Shaw said that if she does nothing for her future “I’m going to be extinct as well as all of the other humans and most of the species”. Shaw said that climate change has become popular in the media but “when it actually matters, we’re not really not doing anything about it”. Photo: Ashraf Hendricks 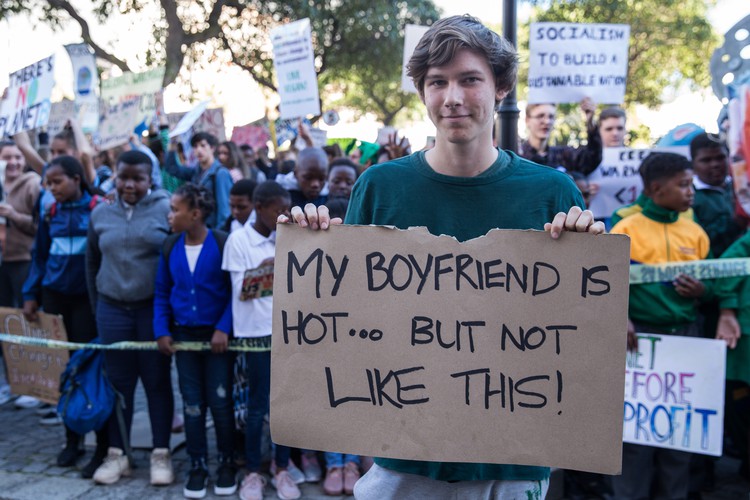 Sasha Rodenacker, a 16-year-old grade 11 learner from Herzlia High, said that the protest was incredibly important because it was run by the youth. “We want a place to live as well,” he said. Rodenacker said that the youth are mostly active in this fight against climate change because “we are going to be living here so much longer than adults are”. Rodenacker said there were still a considerable number of people who deny climate change, or who don’t care, but “this issue is seriously going to affect you at some point”. “It’s better to start acting now, when we can maybe still do something”. Photo: Ashraf Hendricks

Next:  A year after Hermanus unrest, land occupation unresolved