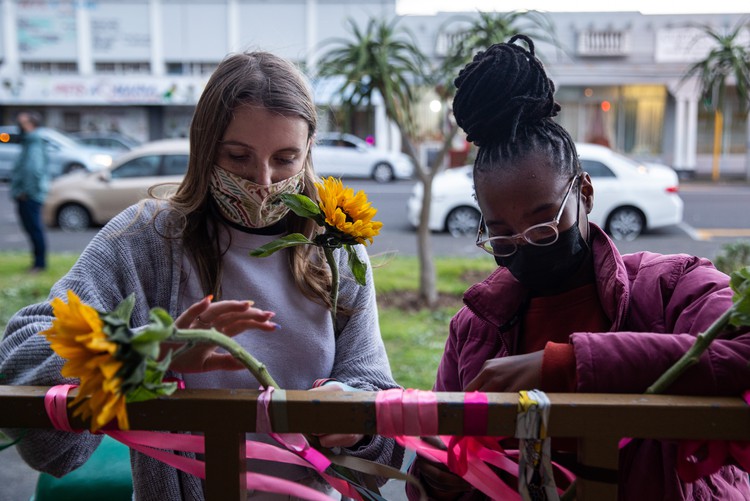 Students Hannah van Niekerk (left) and Winnie Mkoko tie sunflowers to the railings of the Clareinch post office in Cape Town in memory of Uyinene Mrwetyana who was killed there two years ago. Photo: Ashraf Hendricks

Flowers, ribbons and candles were tied to the railings of the Clareinch post office in Cape Town on Tuesday in memory of Uyinene Mrwetyana who was killed there two years ago.

The rape and murder of the University of Cape Town student in August 2019 led to nationwide protests.

“I’m a mother with a daughter who’s exactly the same age as Uyinene would have been,” said Kate Christie, organiser of the memorial. She said she wept for Uyinene’s mother. “My heart breaks with her”.

“We need to honour this young woman’s life. She did not sign up to be the poster child of gender-based violence.”

“We can’t keep saying sorry,” said Emily O’Ryan, who is the project manager of the “Post Office to Parliament Campaign”. The campaign is a project of the Uyinene Mrwetyana Foundation and plans to collect thousands of postcards and letters which will then be taken to Parliament.

O’Ryan said she was present when President Cyril Ramaphosa addressed protesters outside Parliament in 2019, after the murder of Mrwetyana and of University of the Western Cape student Jesse Hess. Ramaphosa had promised action on gender-based violence.

But nothing has happened since, she said. The National Council on Gender Based Violence and Femicide still had not been created, said O’Ryan.

“There was huge outrage at the time, yet two years later, women are still murdered every three hours in this country,” said Sharna Fernandez, Western Cape Provincial Minister of Social Development. “We get outraged. We cry. We bring flowers. And tomorrow, the vicious cycle is perpetuated again”.

Fernandez said women should feel safe wherever they go and the only way to fight gender-based violence is to hold every individual accountable.

University student Hannah van Niekerk said she was at the protest outside Parliament in 2019 and it was important to keep on fighting. “There needs to be more support for women who have experienced gender-based violence,” she said. 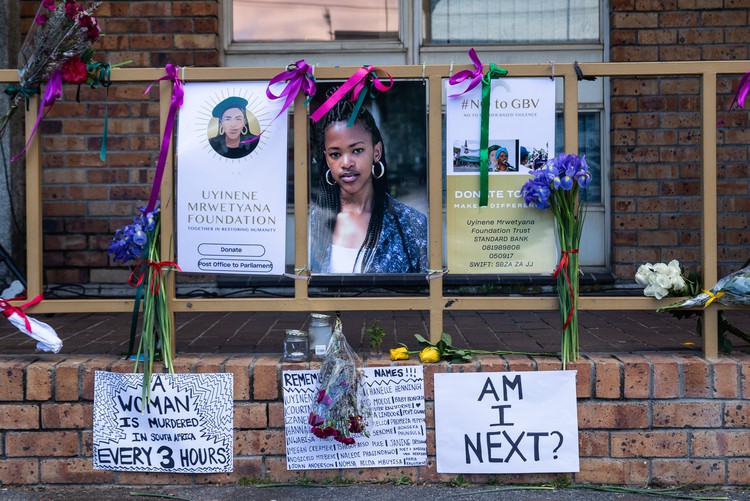 Uyinene Mrwetyana was raped and murdered two years ago. She was 19 years old.