Patients turned away as clinics close over health worker protests

Union pleads for government to intervene as “the poor are suffering” 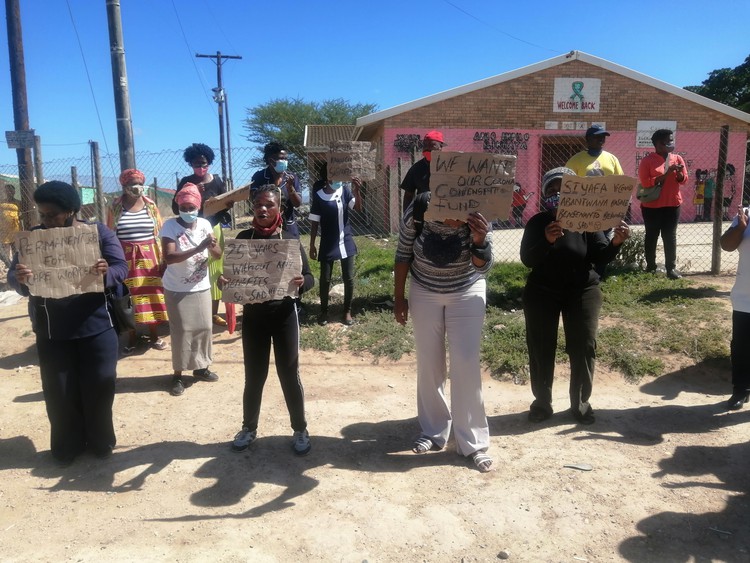 Community Healthcare Workers picket outside Lukhanyo Clinic in Addo on Monday, demanding to be integrated by the Eastern Cape health department. Several other clinics in the province remained closed on Tuesday where pickets continue. Photo: Mkhuseli Sizani

Several clinics in the Eastern Cape remained closed on Tuesday following protests by Community Healthcare Workers (CHW), who are demanding to be employed permanently.

At least six clinics in Paterson, Addo and Kirkwood in the Sundays River Valley Local Municipality have been closed since Monday and Joza and Raglan Road clinics in Mkhanda since last week.

On Monday morning, hundreds of patients from Sundays River Valley communities were turned away by staff, including some nurses who joined the pickets.

In a statement on Friday, the National Education, Health and Allied Workers Union (NEHAWU) said the Premier and Province should intervene in the matter after attempts to meet with the axed Eastern Cape MEC for Health, Sindiswa Gomba failed.

The provincial health department’s response to the health workers’ ongoing demands to be integrated is that it is a national decision and is being dealt with at the bargaining council.

The picket outside Lukhanyo Clinic was led by NEHAWU and some ANC members.

Shop steward Lonwabo Five said: “We have about 18 CHWs in the entire municipality. They demand permanent jobs and benefits such as UIF, like all the frontline workers. Most of them have been working for 20 years but still earn a stipend of R3,500.”

He said permanent staff at the clinic were also demanding a salary increment which they had not received since 2018. “Medical aids are expensive and are increasing every year. But our money remains the same,” he said.

In Makhanda, the clinics in Joza and Raglan Road clinics were also closed due to protests by CHWs. Joza clinic served thousands of people from the surrounding area which include Enkanini informal settlement as well as Extension 4, 5, 8, 9 and 10. It was open seven days a week. The Raglan Road clinic serves Hlalani, Fingo and Tantyi locations.

People from these areas depended on the clinics. Now they have to pay travelling costs or walk the several kiometres to Settlers Hospital.

Thabo Magobhiyane from Extension 8 said when Joza was closed last week, he walked for over an hour to the hospital.

One of the protesting health workers, who asked that her name be withheld, said her stipend of R3,500 without benefits was not enough. “It is like the government does not appreciate the job that we are doing. How can you deny permanent employment to people who are serving communities?” she said.

Provincial Health spokesman Sizwe Kupelo urged workers not to disrupt services. Kupelo confirmed that there would again be no increases this year and that the issue raised by health care workers was “a national issue which is at the bargaining council.”