They have been demanding to be made permanent for years 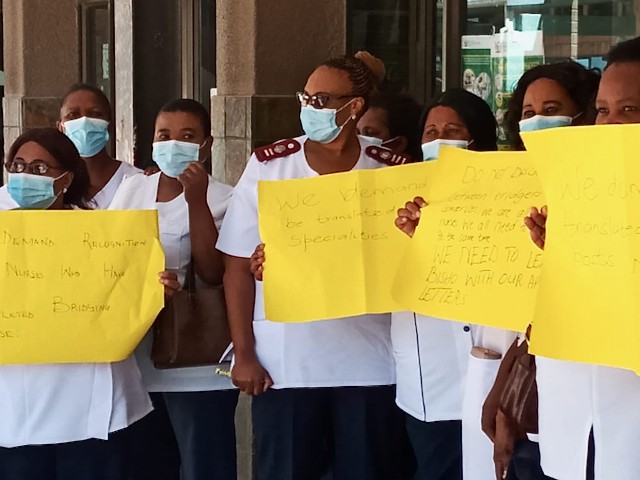 Dozens of patients were left stranded outside Duncan Village Day Hospital on Thursday morning after the strikers locked the gate.

Security personnel later managed to reopen the gate but staff said they felt it was too dangerous to continue working.

Angry patients left after having queued for hours. Lulamile Gantana had come to fetch his medicines. “This is a huge inconvenience for people. Many of us are here because we have appointments … Someone should have informed us not to waste time here waiting for nothing.”

Nomzamo Putwana had brought her week-old baby for a checkup. “If I knew that we would not get help here I would have gone straight to Frere Hospital,” she said.

Strike leader Sizeka Centane said they have been trying to negotiate for years. “We are hoping that they are going to listen to us [this time],” she said. “We are only earning R3,500 [per month].”

Meanwhile, about 30 enrolled nurses held a protest outside the provincial offices of the health department in Bhisho on Wednesday, demanding to be made professional nurses in their areas of specialty, such as orthopedics.

Ayafika Maliwa, from Nelson Mandela Academic Hospital in Mthatha, said she started working as an enrolled nurse in 2011 and has achieved additional qualifications to be upgraded to professional nurse, but has been waiting for a post since 2018.

Eastern Cape spokesperson for health Sizwe Kupelo said the integration of community health workers is a national issue and is being dealt with at the bargaining council.

“We call on them to be patient and raise their grievances in a non disruptive manner. Eastern Cape cannot take a decision on its own on this matter,” said Kupelo.

Kupelo said the department will respond to the nurses’ memorandum.

“Currently as a department we are overspending on the compensation of employees,” he said.

Next:  R66-million bridge left up in the air

Previous:  “The slow violence of malnutrition”