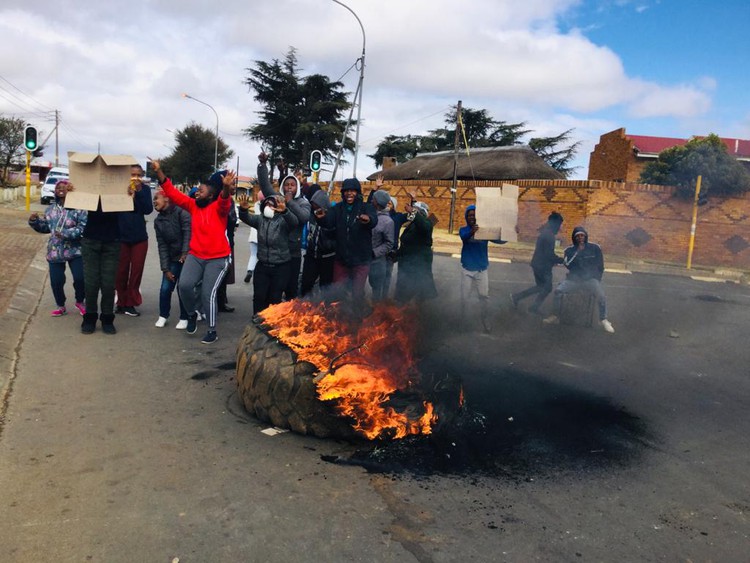 Residents of Maskopasi section in Tsakane blockading roads after the area has been without power for two weeks. Photo: Kimberly Mutandiro

Some roads around Maskopasi section in Tsakane remained closed on Thursday as residents took to the streets to demand that their electricity be restored immediately.

Residents say the area was without electricity intermittently last month before being cut off completely for the past two weeks.

Protesters have been blockading roads in the area with burning tyres since Wednesday. The community is currently divided into households who have electricity and those who don’t.

Residents claim that when Eskom came to fix the electricity in the first few weeks, some houses would remain in the dark. Eventually, all the power went off.

They said that Eskom officials told them that the transformer was being overpowered by illegal bridging, which involves bypassing meter boxes to stop recording consumption in some households. Residents were warned that if the bridging was not stopped, the blackouts would continue.

Some residents said they were willing to be investigated by Eskom.

They said visits to the local Eskom office and attempts to engage with the ward councillor were fruitless. Community members said they had no money to buy coal or firewood to sustain themselves during the blackout.

“We are being accused of stealing electricity. It is not our duty to go into people’s houses and check for illegal connections. Eskom should come and check for themselves. Some of us buy electricity but we are taking the fall for other people,” said resident Nonhlanhala Dube.

“Our councillor is leaving us hanging because he is not coming to address us on what is being done to rectify the electricity issue. We are cold and hungry because we have not been able to cook real meals since the electricity went off. How does one make even a cup of tea without electricity? Coal is expensive,” said Dube.

Resident Betty Chili asked, “How do we drink our medication on an empty stomach? Elderly people like ourselves are at risk in this cold weather. Some of us need to wake up in the morning, light our stoves to make food before drinking medicine. How is that possible without electricity?”

Ward Councillor Desmond Henry Buitendacht told GroundUp that he was working on the issue.

“It’s winter time and all the wards 81, 82 and 83 in Tsakane are facing the same problems. I have been engaging with other councillors to find a way forward,” he said.

“Despite consultation with Eskom, we do not have feedback from them yet. We were supposed to meet last week Thursday and Friday, but they did not show up. We are still waiting. But rest assured we are on top of the matter,” said Buitendacht.

Eskom spokesperson for Ekurhuleni Ntombifuthi Hlope said that ongoing protests in the area had forced their technicians to withdraw, preventing them from fixing the problem.

“We have had to withdraw our technicians for safety reasons. The problem is that residents want to take shortcuts by protesting without making any formal complaints through our office and that will not help them in any way,” he said.