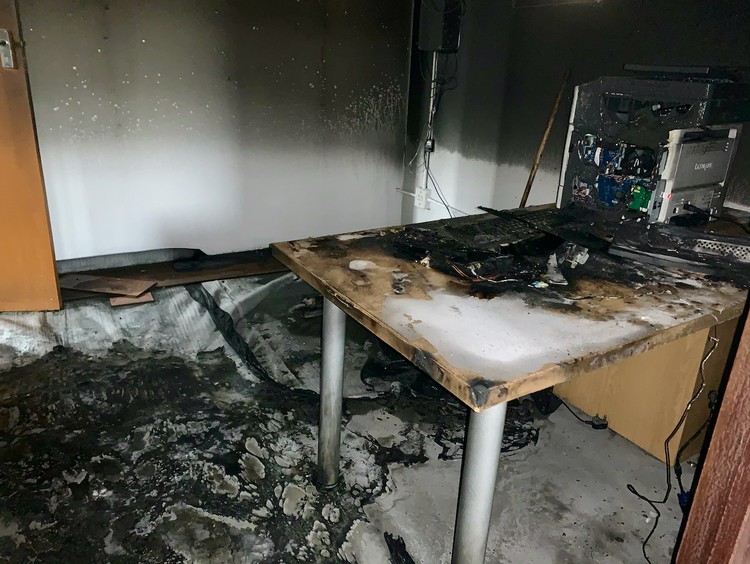 The office is located in the iron-fenced yard of the municipal hall where there is a security guard permanently on duty.

On Tuesday afternoon about 30 people sneaked onto the premises and threw a petrol bomb through the window, according to the security guard. She said the group were mostly youngsters. After the bombing they simply walked off the premises.

She said she reported the incident to community leaders, who were holding a community meeting at the municipal sports field near Inkwenkwezi Secondary School at the time.

The office was undergoing renovations after it was torched on 9 June 2018 by residents angered that the City had demolished their shacks.

A City official said that Tuesday’s bombing destroyed office furniture, computers, a printer, as well as equipment and building materials belonging to the renovating contractor.

Community leader Sinethemba Matomela said the group involved were people trying to occupy land at the nature reserve near the Killarney International Raceway. They had been frustrated by the City deploying a private security company to guard the land around the clock.

This month there have been sporadic violent protests in the area in which at least four trucks have been torched.

On Thursday Makeleni told GroundUp: “It is a City of Cape Town office which is there to service residents. If they don’t want it, it is up to them to do what they want with it.”

Makeleni described the perpetrators as a “syndicate” holding the rest of the community at ransom. He said if the community is quiet “then there is nothing I can do”.

“There is a housing project that is about to unfold and they are putting a strain on that project by burning everything they can see and putting shacks everywhere. We want proper houses. If they want shacks, they must say to the government that they want shacks,” he said.

“Authorities are putting councillors’ lives in danger by not intervening quickly to explain to the community and residents in time what is going to happen, where and what time. They don’t respond quickly enough and provide solutions,” he said.

Matomela said the leaders of the protests set up shacks on the occupied land and rented them out or they sold plots of land for between R4,000 and R8,000, depending on size.

Mayco Member for Human Settlements Malusi Booi said the City is calling on the South African Police Service to take control of the situation.

“SAPS must investigate and manage all criminal acts – namely, public violence and destruction of property, attempted murder, illegal selling of property/land which does not belong to the seller; attempted land invasions and general violence and continued threats. The City will not be held to ransom like this,” said Booi.

He appealed to people to report illegal land sales by giving anonymous tip-offs.

“If they ‘buy’ land as described, it is not theirs and they will end up losing that money. If they attempt to occupy, it will not be tolerated and materials will be confiscated and they will not get their money back,” Booi warned.

On Thursday, Western Cape SAPS spokesperson Captain Frederick van Wyk confirmed that a case of arson had been opened.

“Sporadic incidents of public violence are currently taking place on Potsdam and N7 due to a dispute of allocation of housing,” said Van Wyk.

Previous:  Eskom warns that residents who “bridge” electricity will remain in the dark