Hundreds march for water, electricity and toilets in Khayelitsha 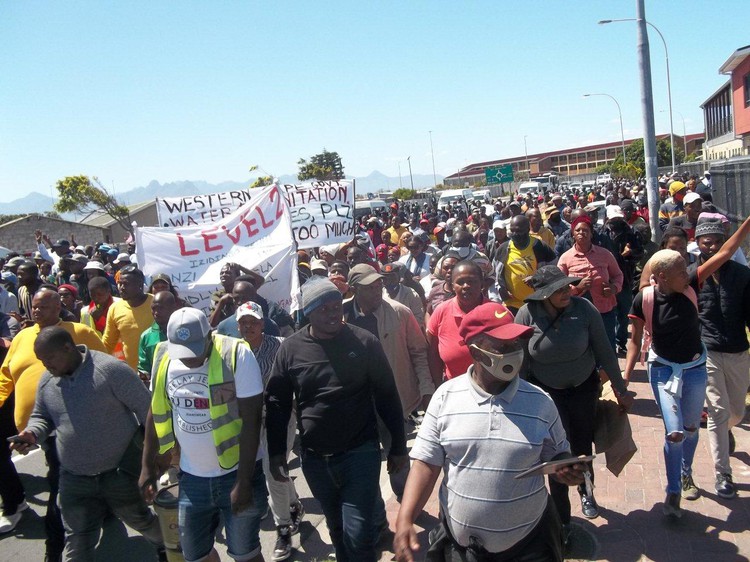 Land occupiers marched to the City of Cape Town’s offices in Khayelitsha on Friday to demand water, electricity and toilets. Photo: Vincent Lali

Hundreds of land occupiers marched to the City of Cape Town’s offices in Khayelitsha to demand water, electricity and toilets.

The group picketed on Friday and again on Saturday in Khayelitsha, holding placards that read: “We have rights” and “We want water” while others placed empty water buckets outside the gate of Khayelitsha administrative offices. On Saturday, protesters handed over a list of their demands to the chairperson of the ad-hoc committee on land at the Thusong Committee Centre.

“We are not here to stir shit but to demand that the City of Cape Town supply us with water, electricity and toilets,” said community leader Mzukisa Zwelibanzi.

“Whenever we visit senior City officials to ask them for basic services, they say our areas don’t feature in their budgets as they are not recognised informal settlements. Since we forcefully moved onto City land, it denies us access to water and toilets whereas convicted criminals have such basic amenities,” said Zwelibanzi.

“You cover yourself with a blanket so that the residents can’t see who you are,” he said.

Twani said that without water, people battle to clean their shacks, wash their clothes and bodies, he said.

“We don’t want to make illegal electric connections because they are dangerous, but we have no other option,” he said.

Sub-council 10 Manager Mandlenkosi Sithonga said he had sent the group’s demands for basic services to the City several times. Sithonga said that since August, his office has been inundated with requests from new occupations in the area.

Sub-council chairperson Patrick Mngxunyeni said that because some of the residents’ occupations were still before the court, services could not be provided. “I will follow up with the City and find out what exactly keeps it from providing basic services in your areas,” he said.

Next:  Churchgoers want their money back