Schools shut down in protest over lack of water 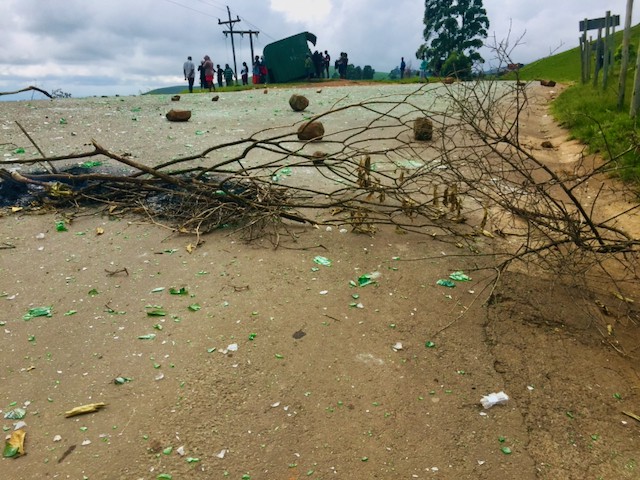 Families in Vulindlela, Pietermaritzburg, say their taps ran dry in October last year and only when they protest is water restored for a few days. Photo: Nompendulo Ngubane

Protesting residents removed learners from three schools in Ngubeni location (Vulindlela area) in Pietermaritzburg on Monday morning. Two clinics – Entembeni and Sondelani – were also shutdown by the protesters. The issue is water.

Elias Ngubane said areas such as Ezakhiweni, Ngubeni and Umkhangala have been without water since October last year. The community is relying on water tankers, which only deliver once a week, sometimes not at all, said Ngubane.

Learners from Bhekamatshe and KwaNgubeni primary schools and Bhekuximba High were blocked from attending school. The D1125 road was blockaded with broken bottles and trees. Vehicles, including one from Umngeni municipality, were denied access.

“Our taps have run dry for a long time … We closed the schools and clinics to try and send a message to the municipality so that they take us seriously,” said Ngubane.

“This is not the first or second protest. What they do is every afternoon of the protest they release water for two or three days. After that we encounter the same issue again. It shows that there is no problem but they are just undermining us.

“How are we supposed to wash our hands to be safe from Covid-19? You tell people to wash their hands regularly but at the same time you don’t supply them with water,” said Ngubane.

By Monday afternoon, residents reported that water had been restored to their taps.

Xolani Makhathini said, “The water tankers are not enough … There are taps in our yards for a reason. They must release water for our taps at home; that is all we want.”

“The problem is if the reservoir is not filled up properly, water doesn’t reach these three areas,” said Mbanjwa.

She said Msunduzi Municipality is also doing upgrades in Vulindlela “to accommodate the increased supply from the latter end of 2022 onwards”.

Next:  Still no maintenance on PRASA trains

Previous:  Covid-19: How bureaucracy can kill