The South African Social Security Agency (SASSA) has given Grindrod Bank and Net1 five days to retract a “misleading” pamphlet being distributed to social grant beneficiaries across the country.

SASSA accounts have for the last six years been held at Grindrod Bank on behalf of Cash Paymaster Services (CPS), which used to pay all the social grants. Net1 is the parent company of CPS and of EasyPay Everywhere, the company which issues green cards to grant beneficiaries for private bank accounts. Net1 also owns credit provider Moneyline, and beneficiaries wishing to take out a loan are expected to take out a green card.

There are currently more than two million grant beneficiaries with green cards. The number spiked in recent months as the contract between SASSA and CPS drew to an end, with activists warning that Net1 might intend to maintain its loan and other business with grant beneficiaries through the green cards once its contract expired.

The contract ended in March this year. CPS will continue to manage the distribution of cash payments until September, but the more profitable electronic payments to over five million recipients will now be made by SASSA or the South African Post Office.

The new SASSA Postbank cards are expected to be distributed in May. Beneficiaries will be required to bring the relevant document to their nearest SASSA or Post Office to apply for the new card. 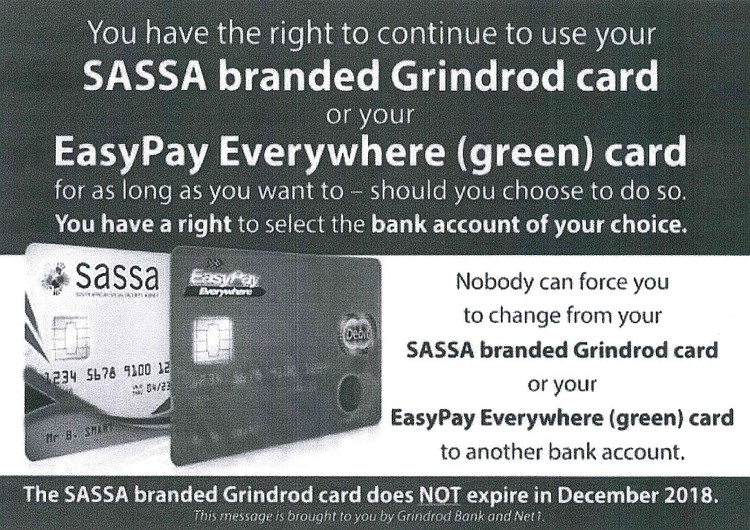 This is the Net1/Grindrod Bank advert that SASSA has said must be withdrawn.

On 23 April, SASSA acting CEO Pearl Bhengu in a letter told Net1 to retract the pamphlet.

In her letter Bhengu referred to the pamphlet as “misleading” because it depicts the EPE card as one of SASSA’s banking accounts “of choice”. “The EPE card has not been endorsed and/or backed by SASSA”, she said.

Bhengu warned Net1 not to market the EPE cards in SASSA offices or at SASSA cash pay points.

“The rules which apply to any commercial bank also apply to you as a bank.”

“We request that you immediately cease with the distribution of the pamphlet and retract the misleading information together with an apology to the beneficiaries,” Bhengu wrote.

Questions sent to Net1 on Tuesday morning were acknowledged but had not been answered by midday on Wednesday.