Cooking up a storm: restaurant staff protest across South Africa 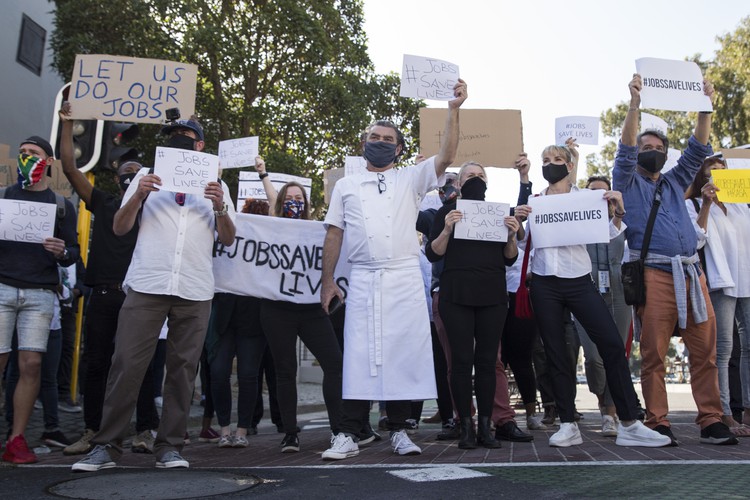 Chef Liam Tomlin (centre) owner of Chefs Warehouse, stood with protesters in Bree Street, Cape Town. He said about 300 employees could lose their jobs in his restaurants. Photo: Ashraf Hendricks

Protests by restaurant employees objecting to some of the Covid-19 restrictions were held in various centres across South Africa on Wednesday. Restaurants want government to lift the curfew and do away with the ban on smoking and alcohol. The call went out this week for a million chairs to be put on the streets of the country in protest. 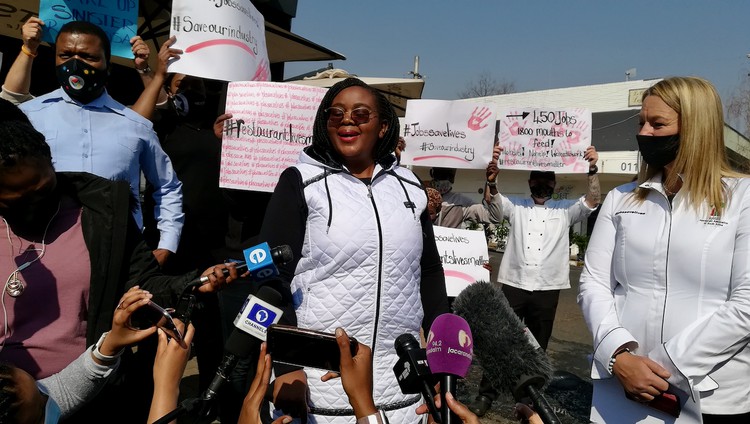 Restaurants in Parkhurst, Parktown North, Melville and Rosebank in Johannesburg participated in the protest. Some restaurants put tables and chairs on the pavement with signs which read “#Save Our Restaurants” and “#JobsSaveLives”.

A group of about 25 staff members from Rockets in Parkhurst and people supporting the protest held placards while cars hooted in support.

Patience Sibanda has been a pizza maker for six years. She said: “Our shifts have been cut because people are not coming to restaurants which means less money for us. We are supposed to be operating until late at night but with the curfew, we can’t.”

Wendy Alberts of the South African Restaurant Association said it had been a difficult 20 weeks of lockdown for restaurants. “Our staff don’t have jobs and our restaurant doors are closing. The liquor ban as well as the curfew has been a major contributing factor to this,” she said.

She said restaurant staff had been badly affected because Unemployment Insurance Fund payments had still not been forthcoming.

Alberts handed over a memorandum to Minister of Tourism Nkhensani Kubayi-Ngubane, who said she would pass it on to Minister Nkosazana Dlamini-Zuma and President Cyril Ramaphosa.

The minister said the department does not have the ability to license alcohol sales but would continue to raise issues that affected the industry “Balancing lives and livelihoods will remain important,” she said.

Kubayi-Ngubane said she was working with the industry and government to get some of the restaurant safety protocols gazetted. 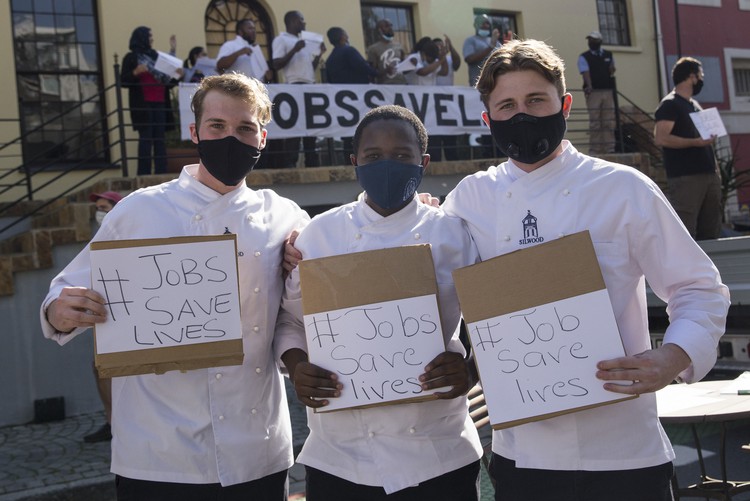 In Cape Town about 100 restaurant employees gathered on Bree Street. Some put chairs and tables in the street, forcing traffic to be diverted. Protesters also marched through the city centre accompanied by a truck with musicians and a speaker system chanting: “Jobs save lives”.

“We’re doing this to show how many jobs are at risk in our industry and how many jobs have been lost,” said Liam Tomlin, owner of Chefs Warehouse and four more restaurants. With the alcohol ban and curfew, Tomlin said that his restaurants might only be able to remain open for “six weeks”, and this could affect up to 300 people.

He said it was costing “a small fortune” to keep staff on board while continuing to pay rates, rent and overheads.

Tomlin said most profits were made from alcohol. With the curfew they have to close at 7pm so that staff can finish up and be home by 9pm. “There is no such thing as dinner service anymore,” he said.

“Food culture in South Africa is a big thing and it will be a shame to lose everything because of a lockdown,” said Ludeke Niehaus, a first-year student at the Silwood School of Cookery. With the restrictions, Niehaus said, the wine farms and the country’s best restaurants will be closing.

“The hospitality industry is obviously collapsing and the government is not doing anything to help,” he said. 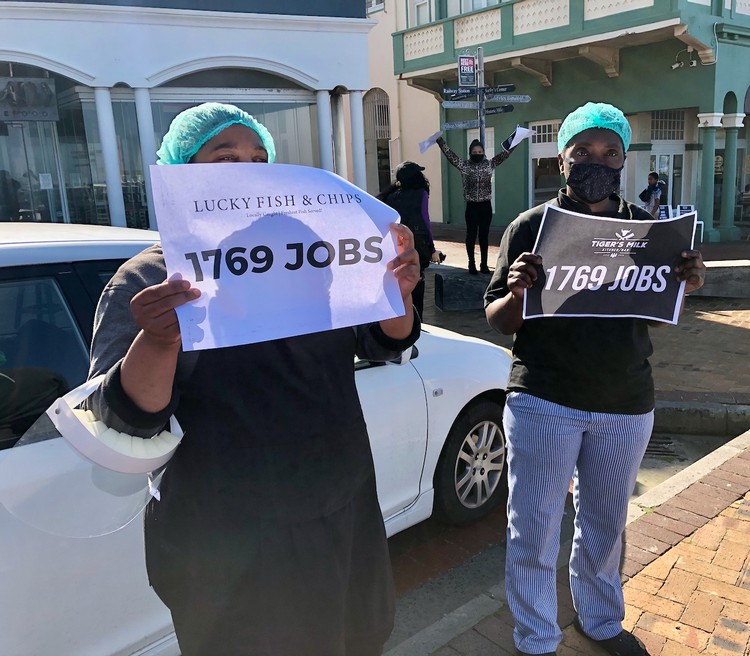 On Muizenberg beachfront, a group of protesters from Tigers Milk, Knead Bakery and Lucky Fish & Chips held placards next to the road at Surfers’ Corner. Photo: Lucas Nowicki

At a protest in Muizenberg, Tigers Milk branch manager Nicholas Goodman said the ban on alcohol and limited seating had hit hardest. The restaurant was operating with only 20 out of a staff of 80 because of the drop in business. “Now, imagine that nationally,” he said.

He said many people in the industry struggled to access UIF and were left without any income. 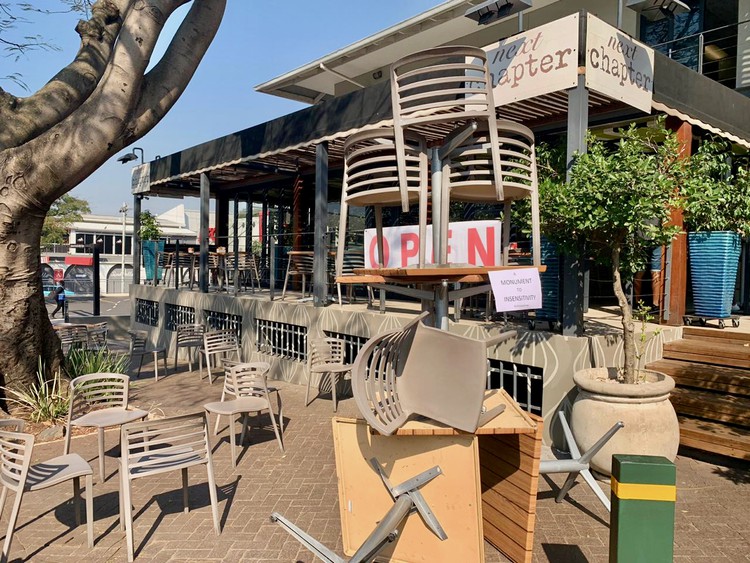 Staffers at the Next Chapter Restaurant on Florida Road, Durban, staged a project by placing tables and chairs outside the restaurant. Photo: Nokulunga Majola

Various restaurants in Durban heeded the call by the Restaurant Association of South Africa but metro police told them to disperse.

Mike Holland of the Next Chapter Restaurant in Florida Road said 48 employees would lose their jobs in his business. “We are not being listened to. With this protest we are hoping that the government will listen to us and save thousands of job,” he said.

Bradley Hollis of Butcher Boys said 40 jobs were at stake. “We had to shut down because of the lockdown and if the situation continues we will be forced to shut down permanently,” said Hollis.

Durban metro police spokesperson Parboo Sewpersad said the protest was against the law. “We were given a directive that there should be no gatherings of any kind. Any protest taking place is in contravention of the Disaster Management Act,” said Sewpersard. Putting chairs and tables on the pavement was also against the law, he said. 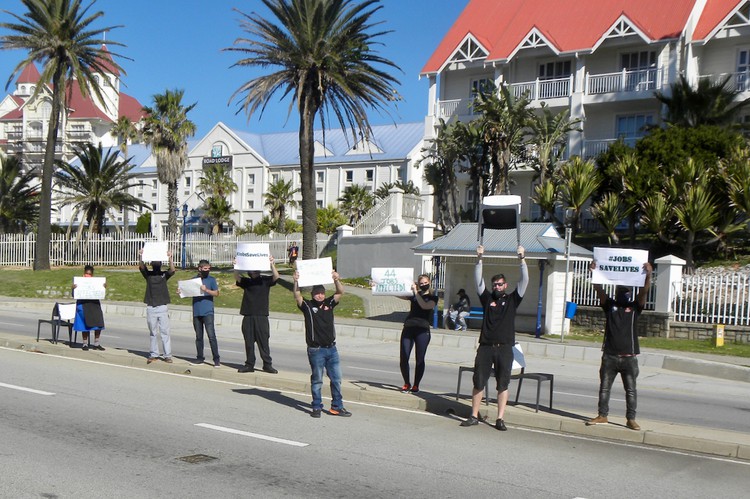 At the Port Elizabeth beachfront only Barney’s Restaurant at Hobie Beach heeded the call to protest. Staff lined up empty chairs along Marine Drive while waving placards. Passing motorists hooted in support.

Restaurant manager Jacques van Aswegen said, “We have a staff compliment of 44 but we are now forced to operate with ten workers … The government should find ways to bring sanity to the industry before more jobs are lost.”