Roads are so bad the taxis won’t enter the area

Residents of Ncwadi in Pietermaritzburg have to walk 15 km or more to the nearest taxi because the roads in their area are so bad the taxis won’t enter.

The residents say they have complained about the roads and about the lack of clean water for years. But, they say, Msunduzi ward councillor Thandiwe Madondo (ANC) has not called a meeting with residents since she was elected in 2016.

Madondo said it was not true that she had never met the residents. But when GroundUp asked her for dates of previous meetings she could not supply them.

Ncwadi is 77km from Pietermaritzburg.

Taxis refuse to come into the town because of potholes and the general state of the roads. A van which takes children to nearby Mdutshini Primary does enter Ncwadi but not if it rains. On rainy days children do not go to school.

A water tanker is supposed to visit the area three times a week but sometimes doesn’t come, say residents.

​​​Nkule Mhlongo, from Ncwadi, told GroundUp some residents have dug ditches to access water. “Cows also drink from those streams. The streams are in the forests. Some people relieve themselves in the forest nearby the streams. The waste runs to the water that we use. It is not healthy but we have no choice. We drink that water with cow dung sometimes.”

“Once a stream runs dry we search for another one in the forest. The water doesn’t last that long. Our ward has been deserted for 25 years. There is no development at all,” said Mhlongo.

In another part of Ncwadi, residents use water which runs under the railway bridge. Cows drink from the same stream. 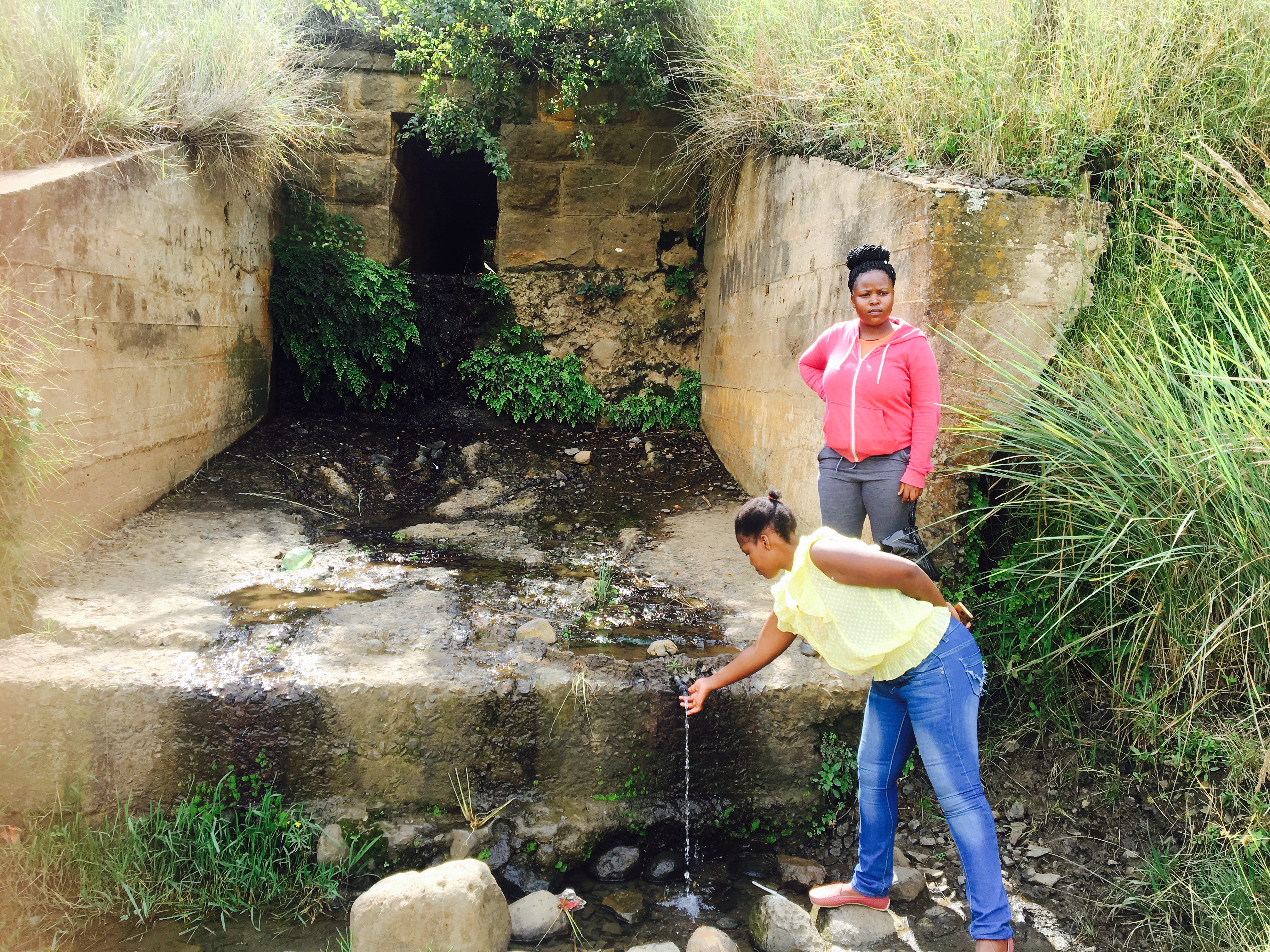 Residents Sthembile Xulu and Phumla Luthuli at one of the streams in the area where residents fetch drinking water. Photo: Nompendulo Ngubane

Thembeka Zubane, who lives in the Mdutshini area in Ncwadi, has to travel over 15 km to catch a taxi to Pietermaritzburg. The taxi fare is R39 to town. Residents have tried to fix the roads themselves, collecting stones and filling in the potholes.

“These are not potholes anymore, they are holes. Taxis are refusing to transport us to taxi stops near our homes,” said Zubane.

“A ward councillor was elected in 2016. She has never held a community meeting. She is never available. She doesn’t pick up our calls. We have never seen her. The community doesn’t know who to report the matters to. We only know her name and surname and it ends there,” said Zubane.

Madondo said ward 39 had been moved to Msunduzi municipality from Harry Gwala region only in 2016. Since then, she said, the municipality had been trying to provide services.

“The Department of Transport will start fixing some of the roads. They have visited the ward. Three weeks ago I received a confirmation letter from the department. The first two weeks, they will start in Impendle. The following two weeks they will be in Mooiriver, then come to Ncwadi.”

Madondo said she would meet the residents on Sunday to explain about the roads.

Sanele Ntuli said the last time there were road works in Ncwadi was when he was in primary school. He is now in his 20s.

“I was in primary school when I saw a grader in one of the roads. Our ward has remained the same. It doesn’t get better; it is getting worse. Come next month, we are expected to vote,” said Ntuli.