Toilets unserviced for months in Khayelitsha

We breath unbearable stench from the dirty loos, says resident

Residents of Msindweni informal settlement, Khayelitsha, say their toilets have not been serviced since May. The area reeks of faeces which come out of broken pipes.

“Even while the janitors were still working, they never bothered to clean some toilets that were blocked,” says resident Nomanenekazi Hlobo.

She keeps one toilet locked with a padlock. She cleans and disinfects it for her and her neighbours’ use.

Long lines form at the few usable toilets when people return from work and school. Some people break the padlocks with hammers and people fight over places in the queues.

Residents can also use toilets located at a nearby taxi rank, but have to pay R2. Some residents of Island informal settlement also use the Msindweni toilets. “We want the City of Cape Town to give Island residents their own toilets,” says Hlobo.

“You step on shit as you walk past kids who are relieving themselves outside their family shacks … While we do laundry at the toilet taps, we breath unbearable stench from the dirty loos,” says Nandipha Hlobo.

Community leader Bavuyise Ngcwazi said the City installed 50 toilets around 2008 and another 50 in 2014.

“The cause of the blockages is that the City takes long to hire new janitors to replace the ones whose contract expired in May … We want the City to send plumbers to take the old toilets apart, clean the pipes, toilet seats, cisterns … or replace the toilets with new ones,” said Ngcwazi.

He said they reported the problems with the toilets two months ago.

Mayco member for water and waste Xanthea Limberg said, “The appointment of the new set of janitors was slightly delayed” due to inaccurate information on the City database. “Also, there were no registered candidates from Msindweni on the City’s database. Names were then procured via the City’s subcouncil office. One of the requirements of this program is that janitors employed to work in specific areas are residents of that particular informal settlement. The appointment of new janitors is in the interviewing stage … The City would like to apologise for any inconvenience caused by this delay.”

“Teams are on site every day clearing blockages but until such time as illegal dumping into the system is stopped, the problem will persist, at the expense of the broader community.”

“The City was not aware of these blocked toilets [Msindweni] until receipt of this media query. The City’s maintenance team has visited the site and have unblocked the toilets.”

“The contractor used to clean the mobile toilets but stopped after the community packed the toilets together in order to create space to build shacks during the illegal occupation of land on the Island settlement.” 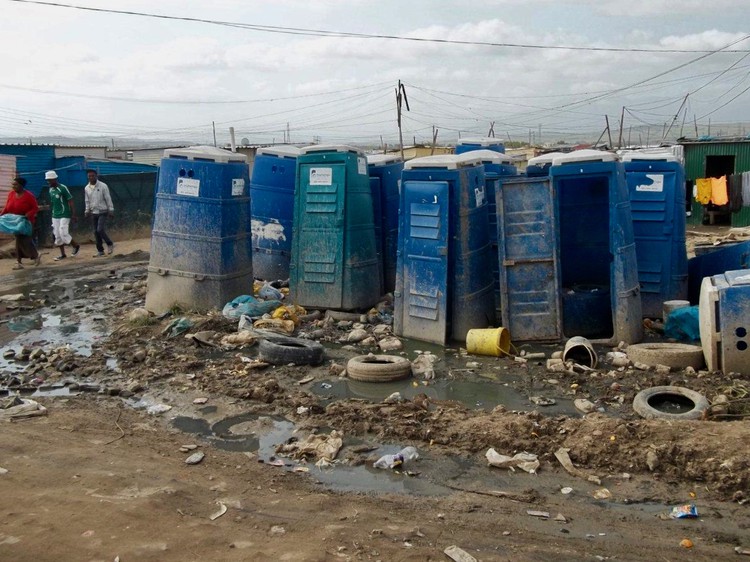 Island community leader Nonceba Ndlebe said shack dwellers no longer used the mobile toilets in Island as they were filthy, but only a few people from Island went to use Msindweni toilets. “Most of us would rather shit in the bushes than in the dirty mobile toilets. Those who work defecate at work,” she said.