ANC comrades accuse each other of KZN political murders

On Monday, scores of ANC members gathered at the home of former ward councillor Musawenkosi “Qashana” Mchunu, who was gunned down on Friday night outside his house in KwaPata, Pietermaritzburg.

Members of the community, many dressed in ANC T-shirts, sang as they awaited the arrival of President Cyril Ramaphosa and ANC NEC members to visit Mchunu’s grieving family. Some in the crowd openly accused other ANC members of the murder.

Among the mourners was Sibongile Zondi. She said Mchunu died for telling the truth. “He was against corruption and he died for that,” said Zondi. “Ramaphosa must do something. We want an answer from him. The ANC has become an organisation for greedy leaders. They are in politics for their stomachs. On our side, we are suffering.”

Mchunu, a provincial organiser for the South African National Civic Organisation (SANCO), was in the front line of recent protests against corruption in the Msunduzi Municipality. In February, hundreds of residents from Greater Edendale marched to the offices of Msunduzi Municipality; in April, Greater Edendale community members demonstrated outside the provincial legislature. The protesters demanded the ANC regional leadership be dissolved and the municipal management resign.

The President has deployed a police task team to investigate the spate of killings in KZN, but no one has been arrested. He has now sent a ministerial task team as well.

“In this province we have had 14 politicians who have been killed in the Moses Mabhida Region. This has to end. With all these killings no one has been arrested,” said Ramaphosa.

Last week, Sfiso Cele, an ANC Lower South Coast Region branch member was shot dead in Margate. At the beginning of May, senior ANC member Nombuso Mqadi was shot after a branch meeting at Umzumbe.

Police minister Bheki Cele, who visited Mchunu’s home on Sunday, said the police will find his killers. He said the police had leads. “Once we arrest them, they will tell us who sends them,” said Cele.

Mchunu’s family has urged the police to work hard on the case. His elder brother, Mandla Zuma, said the family is still in shock. “We are appealing to police minister to help us. Many politicians have died in this manner … It never stops. This has to stop,” said Zuma.

SANCO provincial secretary Richard Hlophe said, “We can’t have members of the alliance accusing one another of the killings. Comrades believe that Mchunu was killed by other members of the ANC.”

On Saturday, the leadership of Moses Mabhida Region and Msunduzi Mayor Themba Njilo were barred from entering Mchunu’s home. Mourners swore at the mayor and told the leadership to leave. 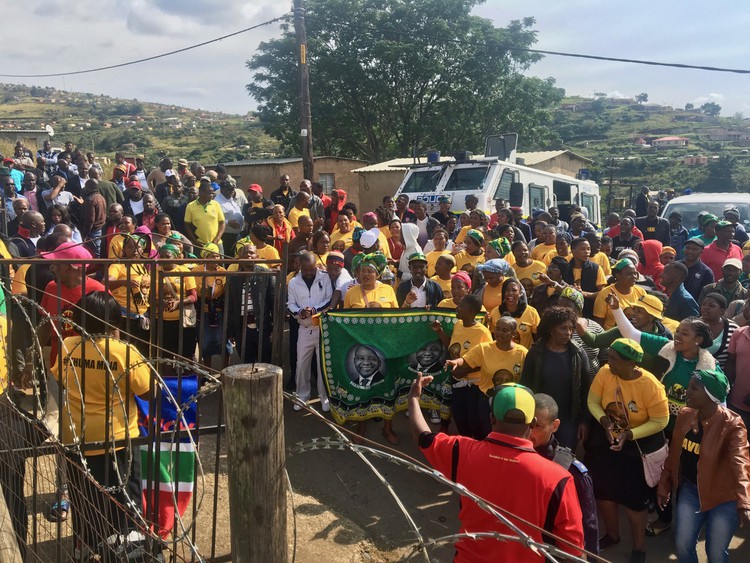 Members of the ANC and KwaPata community in Pietermaritzburg gather outside the house of Musawenkosi “Qashana” Mchunu, who was shot dead at the gate to his home. Photo: Nompendulo Ngubane

Next:  Parents stop teaching at primary school after allegations of corporal punishment