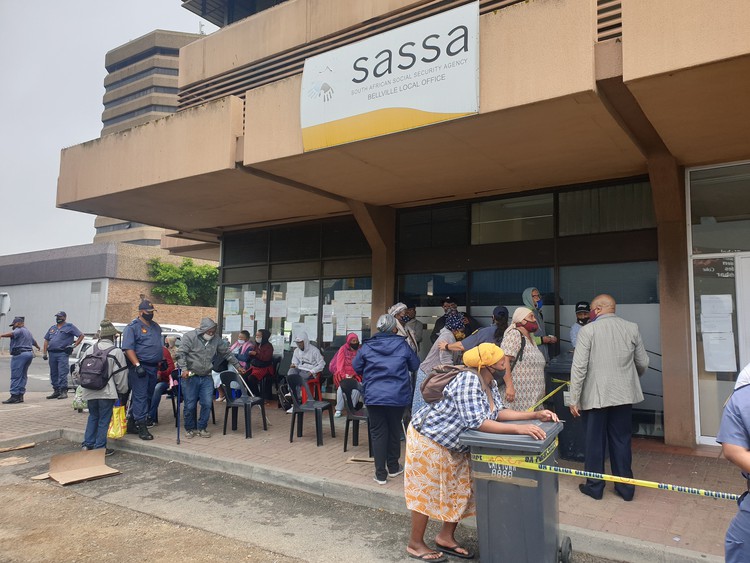 The Social Relief of Distress grant has been extended for a year. Archive photo of social grants queue: Mary-Anne Gontsana

The R350 Social Relief of Distress (SRD) Grant is being extended for an additional year until March 2024, Finance Minister Enoch Godongwana announced on Wednesday.

Presenting his medium term budget policy statement to Parliament, Godongwana said: “The SRD grant was introduced in May 2020 as a temporary measure to respond to the needs of the most vulnerable who were affected by lockdown measures. It has been extended several times since then. Discussions on the future of the grant are on-going and involve very difficult trade-offs and financing decisions.”

But millions of people who used to get the grant have not been receiving it since April, because of a massive drop in approvals by the South African Social Security Agency (SASSA).

SASSA says the number of people approved for the grant plummeted from 10.9 million in March to just under 4.8 million in April.

The number of applications also declined suddenly during this period, from almost 15.8 million applications in March to 8.1 million in April.

Applications and approvals have both risen since March but have still not reached the limit of 10.5 million set by the Department of Social Development (DSD). In August, the number of applications was just over 12 million and the number of approvals 7.4 million, SASSA said in response to a parliamentary question.

Concerns surrounding this decline were raised by the Institute for Economic Justice (IEJ). During a presentation earlier this month co-founder Neil Coleman said that since March, nearly a third of the budget for the SRD grant payments was not spent.

Coleman said that the underspending was a real problem because “these grants are aimed at the poorest South Africans, on the brink of destitution and hunger”.

He said the reason for the sudden decline in approvals was the means test threshold of R350 which excluded a lot of possible beneficiaries, the stringent bank verification requirements, and the fact that applications can only be made through an online system.

The budget cap of 10.5 million approvals was introduced by the DSD in March. The DSD’s budget for 2022/23 for the R350 grant was R44-billion, providing for 10.5 million grant payments per month. This is despite the DSD’s own figures showing that 13.4 million people have no income and 18.3 million people live below the food poverty line of R624 per month.

The threshold for eligibility for the grant was lifted to R624 a month in August after civil society organisation the Black Sash, represented by the Centre for Applied Legal Studies (CALS), took DSD Minister Lindiwe Zulu to court to challenge the “unfair” and “arbitrary” regulations which excluded millions of beneficiaries from receiving the grant.

Black Sash National Advocacy Manager Hoodah Abrahams-Fayker told GroundUp that despite the changes in the eligibility criteria there was still evidence “that the application of the regulations is still excluding millions that require the grant and it is by design”.

“There are still millions that are needing social assistance,” said Abrahams-Fayker.

Several civil society organisations, including the Black Sash, the IEJ, the CALS, and others, have been calling on government to make the grant permanent and increase it to at least R624.

In a press statement today, the Black Sash it had been inundated with calls from people asking how to prove their eligibility.

“It is disappointing that this grant has not reached those who need it the most because of administrative challenges, stringent eligibility criteria, outdated databases resulting in inaccurate rejections, delays with payment and delays with reconsiderations and appeals,” the Black Sash said.

Answers to GroundUp’s questions about the drop in approvals had not been received from the DSD or SASSA at the time of publication.

Good day,
I would just like to ask when are the R350 grants going to be paid?
Some of us have approved months that total more than 12 months.
When you email asking SASSA when are payments being made all you get is soon or they say they working on it.
How must longer is this going to carry on?
We honestly need this money to be paid as unfortunately finding work in South Africa is very difficult at the moment.
Please if something can be done about the speeding up of payment dates for the R350 grants I would really appreciate it as there are millions of South Africans in the same situation as what I am in.
Really find this to be unfair to us.
When the R350 grant first started the payments were made continiously, then they go and mess with the system and now the people who honestly need the money must suffer.

PLEASE I urge you to assist the millions of South Africans needing this money.