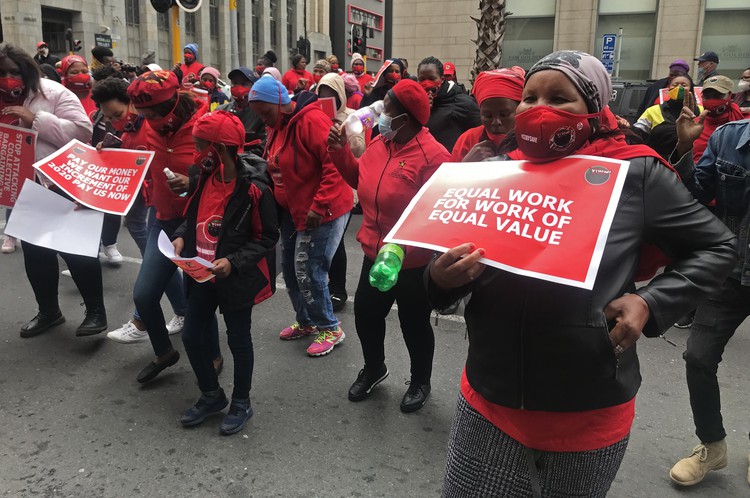 About 100 protesters under the banner of The National Education, Health and Allied Workers’ Union (NEHAWU) gathered outside the Western Cape Provincial Legislature as part of a “national day of action in defence of collective bargaining and workers’ rights” on Tuesday. Photo: Ashraf Hendricks

About 100 protesters under the banner of the National Education, Health and Allied Workers’ Union (NEHAWU) gathered outside the Western Cape Provincial Legislature on Tuesday as part of a “national day of action in defence of collective bargaining and workers’ rights.”

The main reason for the action is an ongoing dispute over a wage agreement struck with government back in 2018 and now being decided by the Constitutional Court.

Government said it could not uphold the agreement and the Labour Court ruled in its favour.

In Cape Town, NEHAWU supporters sang outside the legislature and held posters with, “We demand risk allowance for frontline workers” and “Equal work for work of equal value”.

Regarding the Western Cape government, the protesters demanded that public servant salaries start from R10,000 and that community health care workers be absorbed under the Department of Health. They also want a risk allowance for frontline workers during the Covid-19 pandemic.

“Community health workers are currently employed by NPOs and NGOs,” said NEHAWU Western Cape provincial secretary Baxolise Mali. He said that he wants the government to absorb them so that “they can get the same benefits as public servants, like a housing allowance and pension”.

Mali said that these are not the only issues and they will be back again in October.

The protest was supported by members of The Confederation of South African Workers’ Unions (COSAWU), The South African Communist Party (SACP) and South African Students Congress (SASCO). A memorandum was signed by Robert Shaw of the Western Cape Premier’s office.

Next:  Developers try to overturn sale of land for Cape Town housing development

Previous:  Bathabile Dlamini to be prosecuted for perjury