Protesters shut down parts of Cape Town during peak hours 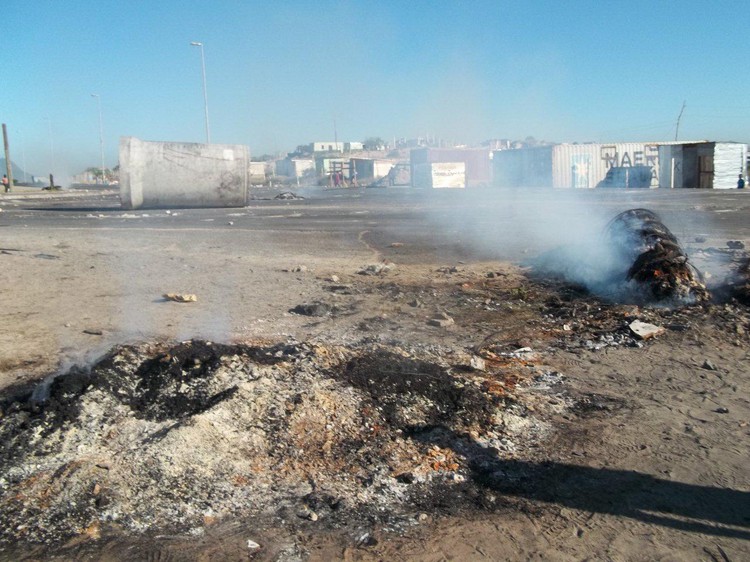 Protesters blocked Old Faure Road near Mfuleni with road signs and other rubble on Tuesday morning. They are demanding water, electricty and toilets. Photo: Vincent Lali

Protesters demanding water, toilets and electricity blocked roads around Khayelitsha on Tuesday morning. On Old Faure Road near Mfuleni, dozens of road signs were ripped off poles, and used with burning rubble to block the road.

The City of Cape Town says it is unable to provide services like water, toilets and electricity to new informal settlements. “Assessments of all unlawfully occupied areas are being undertaken and will continue to be undertaken across the metro,” said Malusi Booi, Mayco Member for Human Settlements, in a statement on Tuesday.

He said that the majority of settlements have been established on unsuitable land, or land with “great constraints for service delivery” and where the installation of bulk services was never planned.

Booi said the City was looking at ways to “manage the challenge of large scale occupations”. He said local government could not be expected to deal with occupations and to provide all basic services and housing needs without funding support.

Protester Mfundo Mavuya said residents wanted the City to provide water, toilets and electricity. “Ward councillors say they can’t give us services because we are not included in their budgets because we occupied the land illegally. They don’t even want to talk to us,” he said.

Mavuya said the land occupiers collected water from a broken water pipe near the corner of Mew Way and Old Faure Road. He said people often queued for two hours. “We are not even sure if the water is fine for human consumption,” he said.

Shack dwellers had to relieve themselves in full view of motorists and people passing by, he said, and accidents had occurred while people, including young children, tried to cross Old Faure Road to collect water.

Protester Nolubabalo Manzi claimed that her son was knocked by a car while crossing Old Faure Road to collect water. She said he had been in hospital briefly for minor head injuries but had been released. “I was heartbroken and the whole community was outraged at the incident. If we had water taps, the car accident would not happen,” she said.

Mbhelandile Twani said a housing movement called Intlungu Yabahlali Basematyontyombeni had organised protests across the city for Tuesday morning. The movement was started in October to support people living in informal settlements as a result of the national lockdown.

The movement is demanding that all new settlements receive water, toilets and electricity. They also want the City to “stop the applications for court interdicts” against residents.

Twani said shack dwellers would continue protesting until their demands were met.

Next:  Eight years later, housing department’s promise has still not been kept