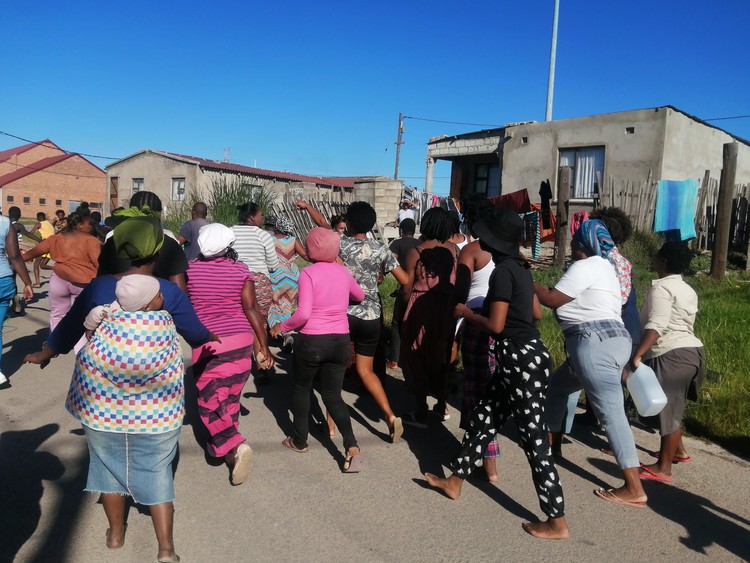 Two groups of informal settlement residents near Govan Mbeki village in Gqeberha have clashed over illegal electricity connections in the area. Residents have also accused leaders of selling plots, increasing the already overcrowded population in the settlement.

On Monday, a fight broke out between about 100 shack dwellers after the group living near Area 20 started removing the izinyoka connections of residents living near Area 16. The first group claims that additional connections from Area 16 have overloaded the transformer, resulting in regular blackouts.

The protest continued on Tuesday with government-marked cars being stoned at the intersection of M14 Perseverance, M14 Bethelsdorp and the R75 Uitenhage Road.

Ward 33 Councillor Nomazwi Sonti said there had been a meeting with community leaders last Wednesday. Sonti said it was agreed that only 400 new shacks could be erected in the area due to overcrowding. “We had agreed that water and sanitation, as well as opening pathways for emergency vehicles, were a priority.”

Sonti said it was the leaders who insisted on getting more electricity. The area was settled about four years ago. “It has six standpipes and ten chemical toilets. According to our Human Settlements database, there are 400 registered shacks there.”

“There has been an influx of people in the area ever since we started numbering shacks last year. The community leaders are selling the sites. They even put their own numbers on the shacks.”

Sonti will be meeting with the people accused of selling plots “to find an amicable solution.”

The problem started about two weeks ago when a transformer near Area 20 exploded, leaving everyone, including people who live in RDP houses, without electricity. Some residents took to the street, demanding that officials restore the transformer.

Later that day, the group started removing each other’s izinyoka connections and that’s when a physical altercation began, with women punching one another in the street.

Lulama Swartbooi from Area 20 said they were upset after the ward councillor told them that older informal settlements were being prioritised for electricity. “This is why we are fighting against one another, because electricity is a priority to all of us here,” said Swartbooi.

The electricity remains off in the village near the informal settlement at the time this article was published.

Next:  Protesters shut down parts of Cape Town during peak hours