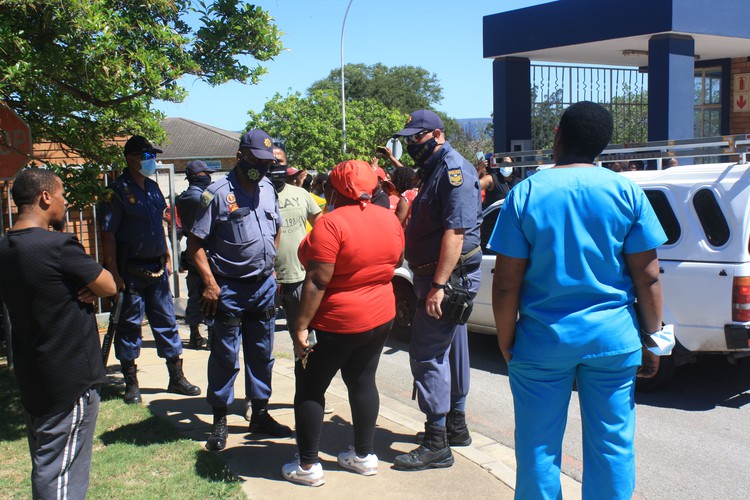 Police negotiate with workers affiliated to NEHAWU on Wednesday during a six-hour picket, in which protesters blocked the entrance to Uitenhage Provincial Hospital. Photo: Thamsanqa Mbovane

Health workers and members of the National Education, Health and Allied Workers’ Union (NEHAWU) protested at the gates of Uitenhage Provincial Hospital on Wednesday following the closure of the TB hospital in Kariega.

A few dozen people participated in the protest.

This follows the closure of Orsmond TB Hospital and Empilweni TB Hospital in Gqeberha. “They want to replace Orsmond with a psychiatric hospital. We have disputed this with the Department of Health. They must bring us stats that say TB is not killing people anymore,” said NEHAWU‘s regional organiser Thembisa Witbooi.

At midday, Nkosinathi Qilimbele from the district Department of Health arrived and convinced the protesters to stop while he met hospital management. He returned after 40 minutes and told NEHAWU that the hospital was not willing to change its decision.

“We understand your frustration. But the only thing we request is to allow access to the health facility because we have critical patients who need to go to hospital,” he pleaded while being booed by protesters.

In response to questions from GroundUp, Eastern Cape health spokesperson Yonela Dekeda said that the protest outside the Uitenhage Provincial Hospital was an unprotected strike and had brought some of the facility’s services to a standstill.

NEHAWU members met again on Thursday morning to discuss how to resolve the issue with the department and hospital management.

Previous:  Lives and eyes lost: excessive use of rubber bullets by police is common