Cry of the Xcluded is a campaign against unemployment

Visitors to Cape Town’s Waterfront were treated to an unexpected performance when the amphitheatre was taken over by protesters on Sunday afternoon. They put on a show, Theatre of the Xcluded, about unemployment, climate change and domestic violence.

About 60 protesters supported the show, which was done without permission from the V&A Waterfront management. The protest is part of Cry of the Xcluded, a campaign aimed at unemployment. It is being run by The South African Federation of Trade Unions (SAFTU), Association of Mineworkers and Construction Union (AMCU) and the Assembly of the Unemployed (AoU). It is also supported by the Alternative Information & Development Centre (AIDC), Reclaim the City and #UniteBehind.

The play, much of it in Xhosa, had a number of subplots. One of these followed a family losing their farm due to a drought caused by climate change, forcing them to move to the city. Domestic violence and a host of other problems ensue. During the play, a banner was held up stating: “Socialism is the cure! System, not climate change.”

“I don’t have dignity and I don’t have any confidence,” Siziphiwe Dunjana told GroundUp after the play. She has been unemployed for over five years and is a member of the AoU. Dunjana stays in Khayelitsha and has a one-year-old baby. She said that she supports herself only with the state-provided child grant of R420, some of which is sent to her mother in the Eastern Cape. She said that she has been constantly job-hunting but cannot afford the CV printouts and travelling costs. 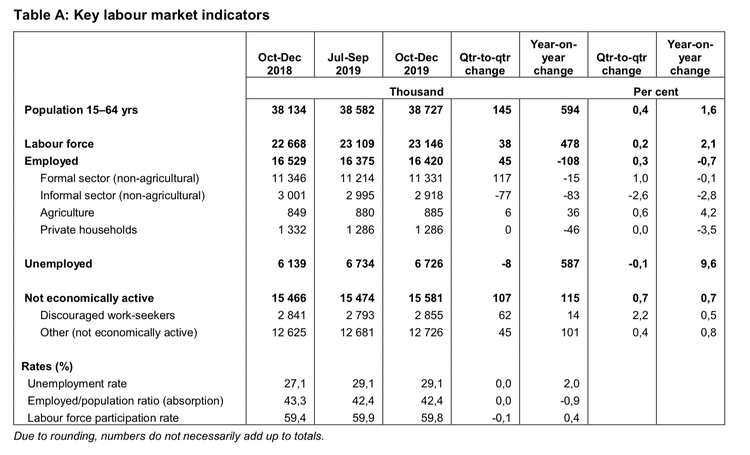 Dunjana is one of over 6.5 million unemployed South Africans. According to StatsSA’s 4th Quarter Labour Force Survey, 29% of South Africans are jobless, which is unchanged from the previous quarter, although this is a 2% increase since 2018, and this is by using the strict definition of unemployment. There are nearly three million discouraged work seekers who are not counted as officially unemployed.

The Waterfront is “a microcosm of luxury, elitism and nice things” said Kaemenomogetswe Seipato of the AIDC. Through protest theatre, she said that her organisation is trying to show visitors ”the real stories” of what South Africans are going through. With the Budget Speech looming, Seipato said there are concerns that austerity measures will cut money to much-needed government services.

She said that we need “sustainable” jobs in sectors that can “work for the economy and the people”. Seipato called this “climate jobs”. She gave an example of this: employing more people to ensure that the public transport system works. She also called for more jobs to fix and maintain school buildings. 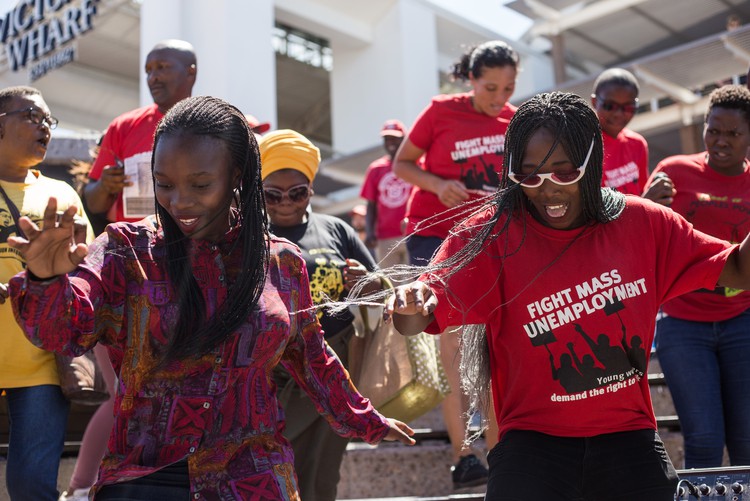 In his 2020 State of the Nation Address President Cyril Ramaphosa called unemployment a “crisis”. He said that out of 1.2 million young people entering the job market every year “approximately two thirds remain outside of employment, education or training”. Ramaphosa committed to setting aside 1% of the budget to deal with youth unemployment.

Following the theatre protest, the campaign will continue this week by hosting The Real Jobs Summit on Monday and Tuesday at St. Georges Cathedral in Cape Town. On 26 February, Budget Speech day, protesters will march to Parliament.