Protest against xenophobia goes ahead after court overturns ban 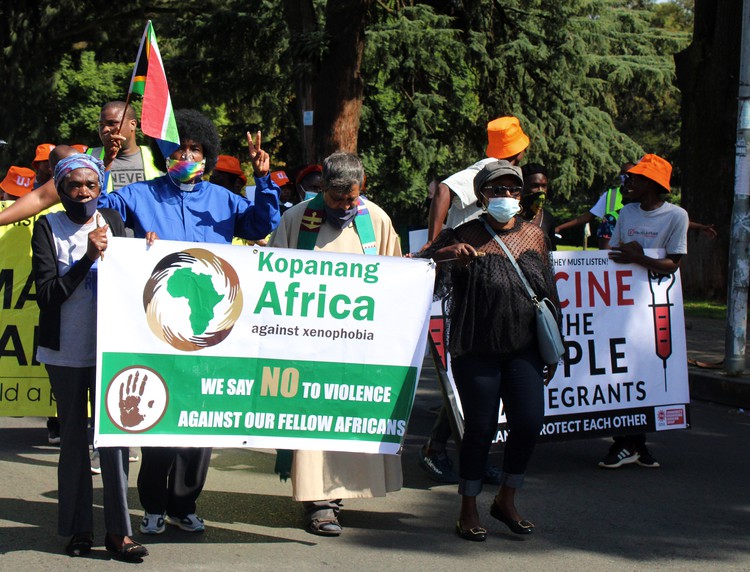 About 200 people protested against xenophobia in Johannesburg on Saturday. Photo: Masego Mafata

“We are frustrated and anxious. On the one side, the South African government has revoked the Zimbabwean Exemption Permit (ZEP), on the other side there is this movement called Dudula. Our futures are really uncertain,” says Taurai Beans.

Beans joined about 200 people marching from Pieter Roos Park in Parktown, Johannesburg to the Hillbrow and Johannesburg Central police stations on Saturday. The march against xenophobia was organised by activists and organisations under the Kopanang Africa Against Xenphobia (KAAX) banner.

The march was initially supposed to take place on 21 March, to coincide with Human Rights Day. But the Johannesburg Metro Police Department (JMPD) prohibited the march because of threats of violence from anti-immigrant groups.

KAAX approached the Gauteng High Court in Johannesburg to overturn the prohibition. The matter was heard on Thursday and the judgment overturning the prohibition was handed down on Friday. JMPD and the South African Police Service (SAPS) were deployed across the inner-city, ahead of the march.

Addressing the crowd at Pieter Roos Park, KAAX chairperson General Moyo said, “We are here to say no to xenophobia [and] away with Operation Dudula … Africa must unite against xenophobia and all forms of exploitation and oppression.”

Operation Dudula is an organisation that has been accused of vigilantism and xenophobia.

“We cannot allow xenophobia to divide the working class. We are calling on different institutions, including Home Affairs and law enforcement to act and protect everyone who lives in South Africa,” Moyo told GroundUp.

KAAX has been endorsed by more than 50 organisations, including the South African Federation of Trade Unions (SAFTU) and some of its affiliates, as well as the Workers and Socialist Party, the Socialist Youth Movement and the United Front.

As the group marched through the streets of Hillbrow, where Operation Dudula supporters also marched last month, some marchers handed out KAAX pamphlets to bystanders.

Beans, who came to South Africa from Zimbabwe 17 years ago, said it was encouraging to see people come out in support of the march. He was forced out of his home in Attridgeville, Pretoria when xenophobic attacks swept across the country in 2008.

“I feel South African for the first time and I’m glad to see that there are others who also see us as humans,” he said.

Moyo said marchers were also against the scrapping of the ZEP, which will “render many Zimbabweans illegal”.

In November, Cabinet announced that it would not be renewing the ZEP. About 182,000 Zimbabweans who hold the permit have been given a year’s grace to migrate to other permits to allow them to stay in South Africa.

But, permit holders have told GroundUp that the Cabinet decision has made their futures uncertain.

“I teach accounting and they do not classify that as a critical skill. My job is hanging in the balance,” said Beans. He said South Africa is the only home his two children know.

“My daughter is in grade 10. She is left with two years and now she has to move to Zimbabwe, where I have been disconnected from the society for the past 17 years. My ten-year-old son was born here. He speaks South African languages better than he speaks my home language. It’s very stressful,” he said.

Another marcher and KAAX supporter, Biko Mutsaurwa, said “bureaucratic and inefficient processes” at the Department of Home Affairs made it difficult for immigrants to get the correct documentation.

Mutsaurwa came to South Africa in 2016. He says he was “victimised for political activism” in Zimbabwe. He said he was granted a section 22 asylum seeker’s permit at the Department of Home Affairs’ offices in Durban. The permit was valid for six months, pending a final decision on his asylum application.

Mutsaurwa said his application was unsuccessful, meaning since 2016 he has had to go to Durban every six months to renew his permit.

“I appealed the unsuccessful application in 2016 and five years later, I’m still waiting to hear back from the appeal board,” he said. Mutsaurwa said the uncertainty he faced without asylum seeker status has made it difficult for him to get a job. Without a job, he said he cannot afford to go to Durban every six months to renew his asylum seekers permit.

In a memo addressed to the South African Government and police, the marchers called on Minister of Home Affairs Dr Aaron Motsoaledi to step down “with immediate effect”. The marchers said Home Affairs failed to comply with the “country’s legal protections afforded to asylum seekers, refugees and other vulnerable migrant groups in South Africa”.

They also called on JMPD and SAPS to enforce the law equally and “do their job of protecting the rights to gather and protest”. They called for an end to the harassment and intimidation of immigrants, as well as the withdrawal of the proposed Employment Services Amendment Bill, which they said discriminates against immigrants.

The marchers demanded that the President implement the National Action Plan to combat racism, racial discrimination, xenophobia and related intolerances. They also called on the government to ensure that every child born in South Africa is registered.

The memorandum was read by Janet Munakamwe from African Diaspora Workers Network and Julekha Latib from One Voice Of All Hawkers Association.

At the Hillbrow Police Station, the memo was received by Captain Noel Mbedzi, on behalf of the station commander. He said the station would give marchers feedback once they had read it.

While no deadline for response was given, Moyo said KAAX would be holding more marchers, community engagements and training sessions.

Meanwhile, a few dozen Operation Dudula supporters were picketing on the other side of the Johannesburg Central Police Station, where Nhlanhla Lux Dlamini has been detained since Thursday night.

According to Operation Dudula general secretary Zandile Dabula, Dlamini has been charged with house breaking and damage to property. She said he will appear in Roodepoort Magistrate’s Court on Monday.

Operation Dudula Members sang and later formed a prayer circle, praying for Dlamini’s release. The members said his arrest will not stop them from continuing with their operations and “defending the country”.