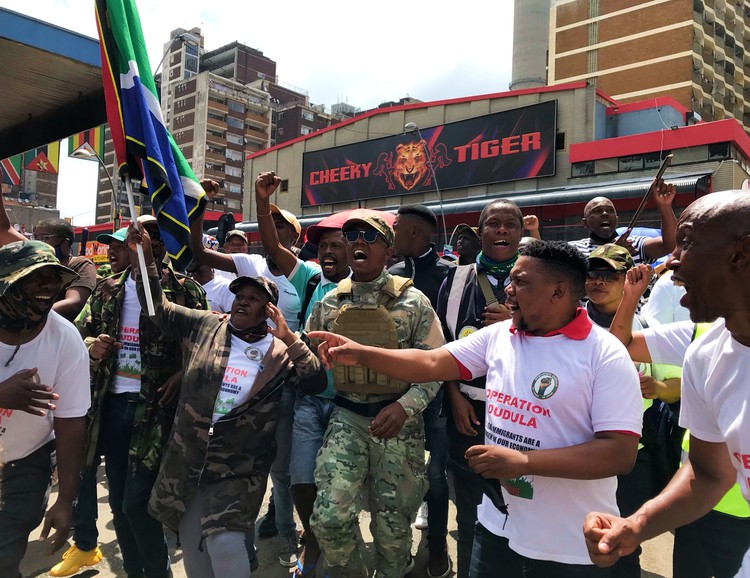 People attending an Operation Dudula protest wear branded T-shirts, which were on sale for R50. Nhlanhla Lux Dlamini, one of the group’s leaders, was among a handful of people wearing military-style clothing. Dlamini said they would not rest until South Africans were put first and given more opportunities. Photo: Masego Mafata

Anti-xenophobia activists and organisations have started a new movement to stop attacks and threats against immigrants.

The movement, called Kopanang Africa Against Xenophobia, was formed on Saturday. The group plans to lead a march on Human Rights Day, 21 March, through the streets of Hillbrow to raise awareness of attacks on immigrants. They plan to hand a memorandum to Gauteng Premier David Makhura’s office.

This is in response to recent actions by groups operating under the banner of Operation Dudula who have been intimidating immigrants particularly those working in the informal sector.

At the weekend, Operation Dudula members went around, calling for shop owners in Hillbrow and Bree taxi rank to employ South Africans only. The group, under a heavy police presence, threatened people away who they deemed to be illegal immigrants, accusing them of being responsible for crime and taking jobs.

The Socio-Economic Rights Institute of South Africa (SERI) believes that Operation Dudula was orchestrated by some political parties under the misguided pretext of protecting employment for vulnerable South Africans.

“We strongly condemn the political point-scoring on migration which resulted in the recent breaches of the rights guaranteed by the Constitution to everyone within its borders. The attack on informal traders and migrants’ right to make a living will result in all vulnerable people being affected,” said Khululiwe Bhengu, an attorney at SERI.

Bhengu said that those in the informal sector contribute to the South African economy, food security and the empowerment of women.

Many traders and shopkeepers closed early on Saturday, out of fear that their stock would be stolen or damaged.

“I don’t know when I will open again, maybe on Monday. … This weekend I won’t be making any money,” said a trader who went by the name Lungisani.

He lives in Hillbrow with his wife and three children. He said he came to South Africa from Zimbabwe almost 25 years ago.

“Even when we have papers and are legally documented, we are made to feel as though we must leave South Africa,” he said.

Lungisani said he was concerned about what would happen to him and his family once the police had left. “It’s better when they [Operation Dudula] are escorted by police. When they are alone, they can do whatever they want to us and we will be outnumbered. We don’t know what will happen,” he said

We also spoke to a 32-year-old hair salon owner who asked that he be identified as Juma. He fled violent conflict in Burundi in 2012. He currently lives with his wife and three children in Empangeni, KwaZulu Natal.

“I only survive on money I generate from the salon. If I stop operating for hours or days I will lose a lot of clients. By the end of the month I will not be able to buy food and pay rent,” he said.

Juma recounted how on 2 February about ten South Africans ordered immigrants to close their shops. He said they first approached the police in Empangeni for help. But when no assistance was given, they went to the Empangeni Magistrates Court and were granted a protection order valid from 2 February to 14 March, said Juma.

As Operation Dudula threatens more action against immigrants in the coming days, Trevor Ngwane – one of the Kopanang Africa Against Xenophobia organisers – said it was important for the working class to take a stand against xenophobia.

“We must come together to fight for jobs, education and better services. We must not attack one another,” he said.

Next:  University of Pretoria workers return to their duties on Monday