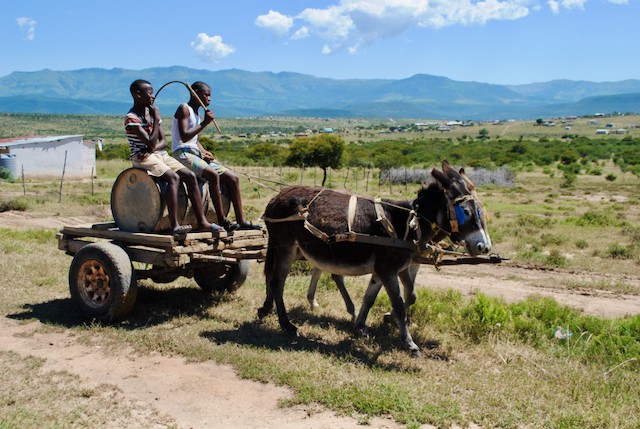 Siseko Fandesi and Asanda Madolo fetch water in a drum with a donkey cart for their family in Mhlangeni near Fort Beaufort. Photos: Mkhuseli Sizani

Hundreds of people in two villages in the Fort Beaufort area have been left without a reliable, safe water supply by the Amathole District Municipality since their boreholes stopped working. In one village that was four years ago. The boreholes have never been fixed.

The municipality says there is a big upgrade underway and pleaded for patience. But villagers say the problem happened when the municipality was replacing pipes and the boreholes collapsed.

Now, women and children fetch water daily with buckets, from rivers they share with livestock. They have to go up and down a steep ravine to reach the water.

Some of the villagers have donkey carts and sell water to those who aren’t able to fetch it. Some people hire bakkies and taxis to fetch water from neighbouring villages which still have tap water.

Mhlangeni village in Hertzog and Kat-katvallei in Seymour are in ward 4 of Raymond Mhlaba Local Municipality, but their water is administered by the Amathole District Municipality. Both municipalities are ANC-controlled.

Luvo Mgwali, a ward committee member in Mhlangeni, said, “Since 2018 our water taps have been dry ever since the municipality was replacing the steel pipes with PVC. Instead of replacing the pipes our water supply was cut off and we were told that our borehole had collapsed. But until today it has not been fixed.”

Mgwali, who is also a taxi owner, says he drives about 11 km with his trailer to collect clean water from other villages.

“The municipality promised to supply us with water tankers three days a week and also families with water for funerals. But that never happened,” he said.

Villagers accuse the municipality of only providing tanker water for funerals to friends and families of municipal workers. 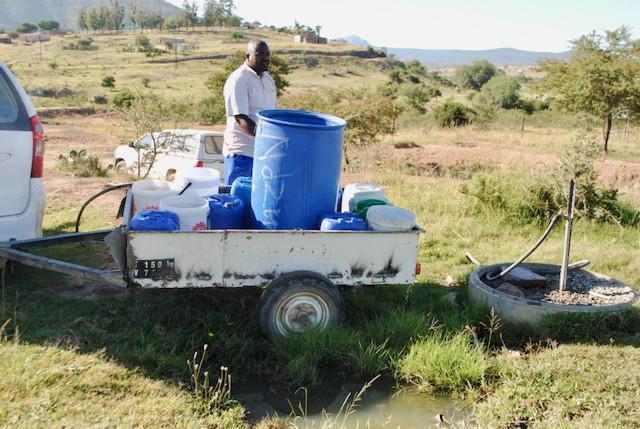 Luvo Mgwali drives about 11 km with his trailer to collect clean water from other villages.

Nophumzile Rangana, 76, said, “I always send my two grandchildren to come and fetch water for me down this cliff. I cannot walk down it because I am very old and I can easily slip.”

“When my grandchildren are at school I come and sit here until other women come and draw the water. Then I ask them to bring me the water with my five-litre bucket. I fetch water three times a day in order to cook and wash my clothes,” she said.

Ntombomzi Dayimani said, “This water crisis makes us very angry because the water tankers are passing our area. Last year in October with five other women we confronted one of the tankers. We asked the driver why they were not supplying us with water? But he never responded. Instead he sped off.”

“Our lives are at risk and going down the cliff to the river is scary. We can be bitten by snakes or be raped hence we always go in groups,” she said.

Kat-katvallei lost its borehole supply in November 2021 when municipal workers removed old pipes and never installed new ones, according to resident Mpumelelo Nkantini.

Since then the villagers have been drinking water from the Kat River.

“The municipality only brought us the water once in December for over 250 households,” said Nkantini. “We are literally competing with animals for drinking water. We have to wake up as early as 4am to get the water before these animals wake up. If they get first to the water they pee and poo in the river. Then we have to wait for many hours until the water clears.”

“We have reported the problem several times to the municipality but nothing has been done,” he said. 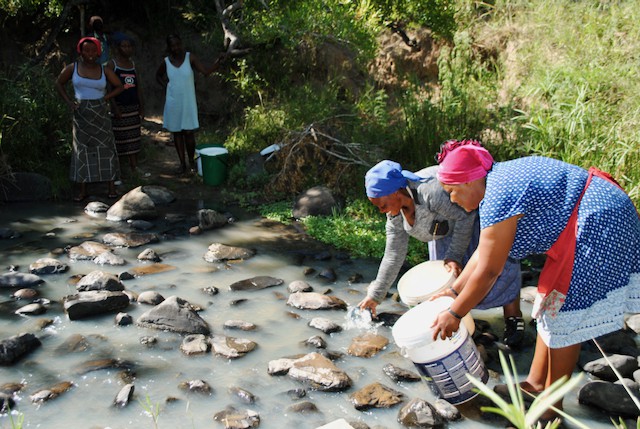 Mhlangeni villagers share this river with livestock for water.

Nonceba Madikizela-Vuso, spokesperson for the district municipality, said, “The area is covered under one of Amathole District Municipality’s long term solutions which is the upgrading of Fort Beaufort Bulk Water Supply System funded through Municipal Infrastructure Grant. Phase one of this project is underway. It includes construction of reservoirs, installation of pipelines and pump stations and will last for 12 months.”

“Other areas will however be covered by phase two which will include upgrade of water treatment works and upgrade of raw water source. This phase is still in procurement stage.”

“Our short term solution is water carting which is not without challenges as our district is vast and rural in nature.”

“As a drought stricken district we plead with our communities to guard water infrastructure against vandalism,” she said.

GroundUp’s questions about the replacing of pipes which the villagers blame for the problem were ignored. 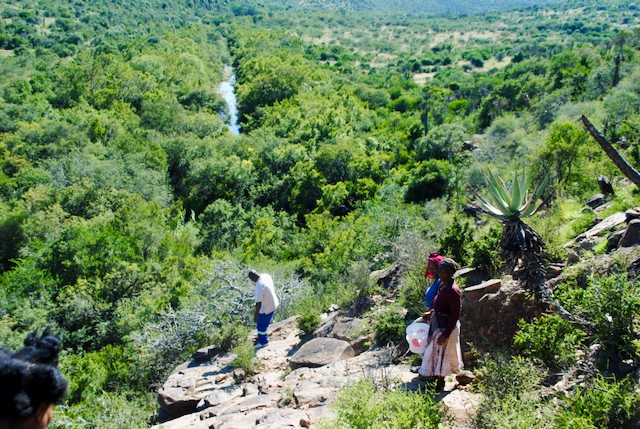 Women in Mhlangeni go up and down this steep ravine to fetch water from a river.

Next:  “We have nowhere to go” say Mamelodi occupiers as eviction looms

Previous:  Protest against xenophobia goes ahead after court overturns ban