Government accused of only paying lip service to climate change 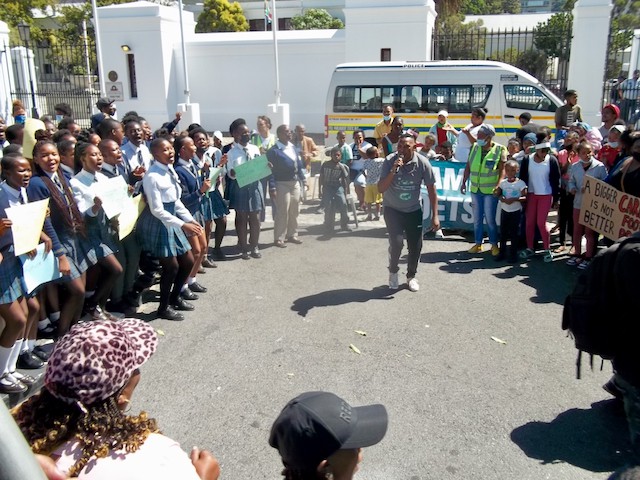 The African Climate Alliance protested outside Parliament on Friday, calling on government to eliminate “all fossil fuel electricity production by 2035 at the very latest”. A placard read: “We demand a climate revolution”.

Sarah Robyn-Ferrell of the African Climate Alliance said the protest was part of an international protest by youth under the theme “People, Not Profit”.

“We are facing a crisis both in terms of inequality and climate. And those who are marginalised will face the worst effects of it,” she said.

In a memo the alliance calls on government to stop public and private capital investment in fossil fuel-intensive industry and “fully commit to a moratorium on all new fossil fuel explorations”.

The memo demands that government embrace a rapid and sustained shift to the “full green re-industrialisation” of the economy.

“The concerted attempts by the present Minister of Mineral Resources and Energy and NERSA to procure a further 1500MW of new coal-fired generation capacity is completely unacceptable,” says the African Climate Alliance.

The current national curriculum, it says, fails “to adequately prepare our youth for the world they are set to inherit”.

Besides implementing the Climate Change Bill, Parliament must “debate the adoption of the Climate Justice Charter”.

Charles Ford, Regional Head in the Presidency, received the memo.

“I will make sure that the President receives the memorandum and replies,” he said.

Next:  Protest against xenophobia goes ahead after court overturns ban