Toddler airlifted to hospital after falling into uncovered drain 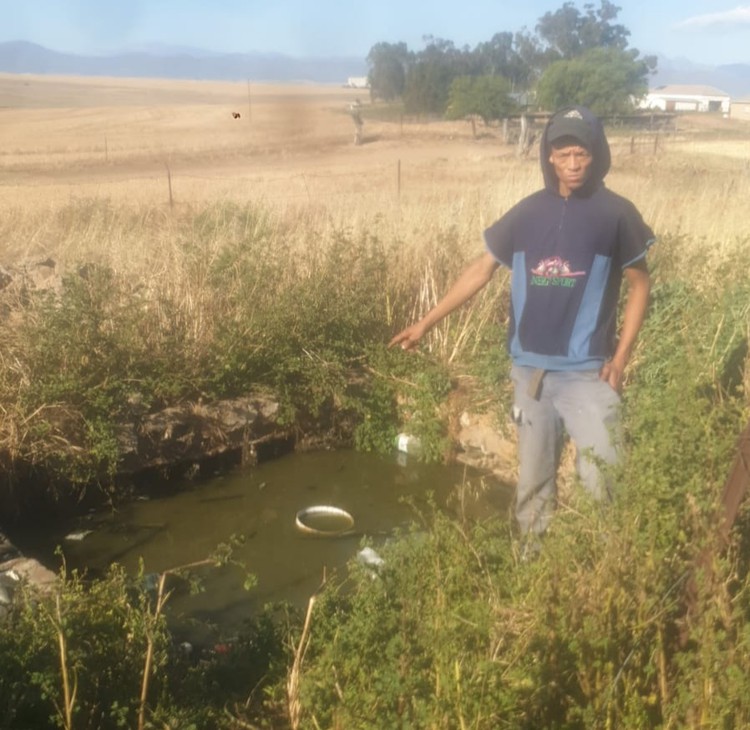 Juan Pieterse points out the uncovered drain filled with dirty sewage water that his two-year-old son, CJ Smith, fell into while playing with friends on a farm meters from their home in Piketberg. He is currently in a stable condition at Tygerberg Hospital after being airlifted from Radie Kotze Hospital. Photo supplied

A two-year-old boy from Piketberg, Western Cape had to be airlifted to Tygerberg Hospital after he fell into an uncovered drain on a farm near his house. Residents of the farm Rondekop, as well as the surrounding area, have apparently been complaining about the uncovered drain for almost three years.

CJ Smith’s family say he was playing with friends and tried to retrieve a ball that went into the drain when he fell in.

Tygerberg Hospital spokesperson Laticia Pienaar said, “We can confirm the patient was admitted from Radie Kotze Hospital [in Piketberg] and airlifted by helicopter to Tygerberg Hospital, and is currently in a stable condition.”

According to Billy Claasen, of the Rural and Farmworkers Development Organisation, the incident happened at about 1pm on Wednesday. He said the open drain was just metres from where CJ lived with his parents and other farm workers. “The farmworkers have asked the farmer on many occasions to make a plan to close the drain, but nothing was done,” said Claasen.

He said Smith was rescued by his father, Juan Pieterse, after his son’s friends ran to his house to alert them to what had happened. CJ was found struggling in the green-coloured sewage water, he said.

Pieterse and Smith’s mother Crismally Smith could not speak to us on Thursday as they were still with CJ at the hospital. Claasen said Pieterse and Crismally did not work at Rondekop farm but at another one nearby.

Smith’s grandmother, Grieta Smith, said that the family, which included CJ’s other siblings aged five and 13, were distraught by the incident. She said it was the first time something like this happened in the small town, but residents around the farm have been asking the farmer to cover the drain.

She said police have visited the family and the scene of the incident, but the farmer did not.

Claasen said this incident illustrated the deplorable living conditions and care shown towards farmworkers. He added that not far from where the incident occured, farmworkers were being evicted.

The Rural and Farmworkers Development Organisation plans to write to President Cyril Ramaphosa about the struggles that farmworkers face. It has also threatened to lay charges against the farmer, whom Claasen claims has fenced off the farm after the incident.

Bergrivier Municipality Mayor Ray van Rooy said the farm is about 5km to 8km outside Piketberg. He said the drain was on the farm’s private property which restricted the municipality from intervening.

Van Rooy said he asked a health practitioner to visit the scene after the incident.

We phoned the person who is alleged to be the Rondekop farm owner but calls went unanswered. When we reached out to the farmer on Whatsapp, he blocked further communication.

In August, GroundUp reported on a similar incident, where Imithande Swaartbooi also aged two drowned after falling into an uncovered manhole in Greenpoint, Khayelitsha.

The sub headline in this article has been amended

Next:  Credit regulator fails to explain why it has withdrawn action against controversial money lender

Previous:  Immigrants tough it out in Joburg’s “dark buildings”