Immigrants tough it out in Joburg’s “dark buildings” 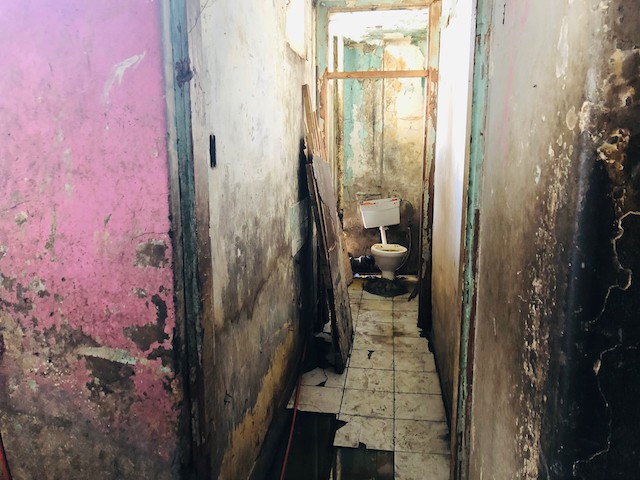 Inside one of the “dark buildings” in central Johannesburg where thousands of immigrants live. All photos: Kimberly Mutandiro

They are known as “mnyama ndawo” (dark places) in central Johannesburg. To many locals they are notorious places, dens of vice and blamed for all manner of crimes and social ills. But for thousands of vulnerable immigrants they are a refuge.

The “abandoned” buildings in Ellis Park, Marshall Town, Faraday, Nugget and Jeppe Streets are home to people from Zimbabwe, Malawi, the DRC, Mozambique, Tanzania, Nigeria and other countries. Among them are asylum seekers, refugees, people with expired passports and undocumented immigrants. Most are unemployed and survive hand to mouth finding piecemeal work or selling things on the street. Some are blind or have other disabilities which have left them struggling to make an independent living which would have allowed them to rent formal accommodation.

During his term as mayor, Herman Mashaba tried to empty these buildings. Raids and searches by police and immigration officers in the night became commonplace. Over the years, the residents have sought help from human rights lawyers and immigration organisations. Similar action led last month to the ​​Constitutional Court striking down a section of the police act which allowed for warrantless searches in cordoned off areas.

The buildings are dilapidated, without electricity, water or proper sanitation. Rubbish is strewn about; there is stagnant water and the stench of sewerage.

Syndicates extort rent from the residents. Robbery and theft are a constant hazard.

Immigrant children living with their parents in these buildings are used to this unstable life of serial evictions from one building to the next, hearing gunshots and seeing their homes being raided by police in the middle of the night. The children are often out of school due to a lack of documentation or simply because most parents are unable to afford the fees charged by schools in the city centre. Children often help their families by begging on the streets. Some have been taken into care by social workers. 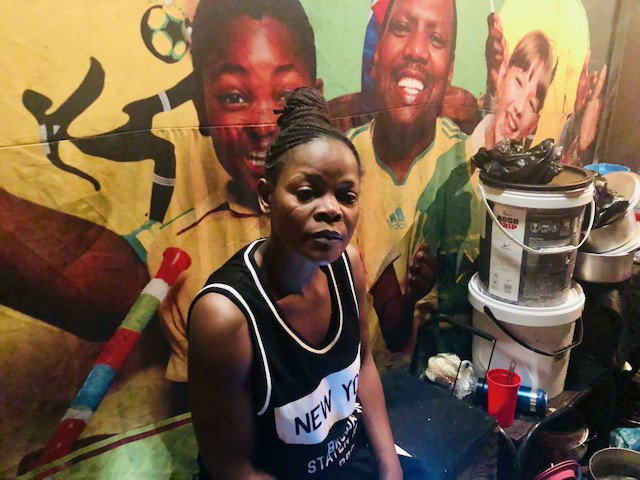 “At least we have the buildings to call home, but the life we lead is a gamble,” says Caroline Chitupa, a Zimbabwean immigrant who lives in one of the dark buildings in Ellis Park.

“This is the life we live and sadly our children have also adapted to it. At least we have the buildings to call home, but the life we lead is a gamble,” says Caroline Chitupa, a Zimbabwean immigrant living in one of the dark buildings in Ellis Park, where families have been fighting off eviction since 2019. She survives by selling beer, though she often loses her stock when the police raid and confiscate her merchandise.

“Any time of the night while we are sleeping police voices come screaming into our homes, our doors are kicked open. We can’t remember how many times we’ve fixed doors or changed locks,” says Chitupa.

Consequently, her building has been nicknamed Baghdad.

Just last week the building was raided by police.

“They look for anything – drugs, alcohol, anyone living in the country illegally. But we are not criminals. All we want are better lives for ourselves and our children,” says Chitupa.

Inside, makeshift boards and curtains divide up the space for over 400 families, mostly Zimbabweans. People rely on illegal electrical connections and pay R2 to use toilets outside the building.

Chitupa says Mashaba came to the building and “expressed concern over our living conditions and wanted us to leave”.

“We have been told that the building was sold. But we will continue fighting because this is the only home we have known for years,” she says. 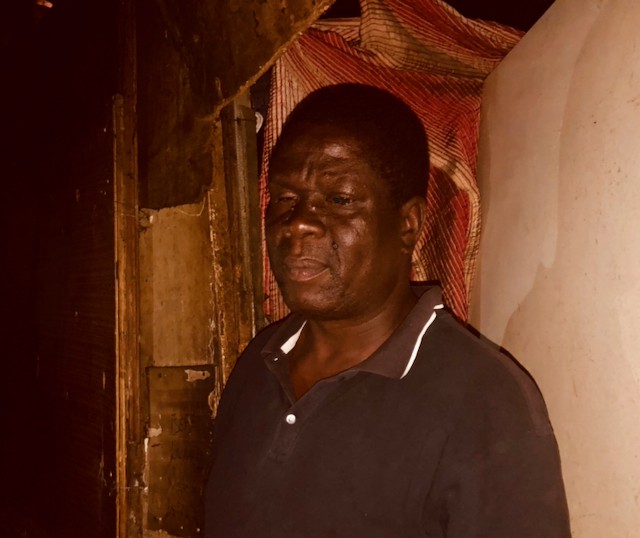 “There is nowhere else we can go, because we cannot afford to pay for better accommodation,” says Lazarus Chinhara, who is visually impaired.

Lazarus Chinhara, who is visually impaired and a representative of Zimbabwe People with Disabilities living in South Africa, begs for a living. When he can he sends money home to his family in Chivhu.

When the Covid pandemic struck he was repatriated to Zimbabwe. He would have liked to remain there, but conditions back home were so bad he returned to South Africa.

“There is nowhere else we can go, because we cannot afford to pay for better accommodation,” he says. 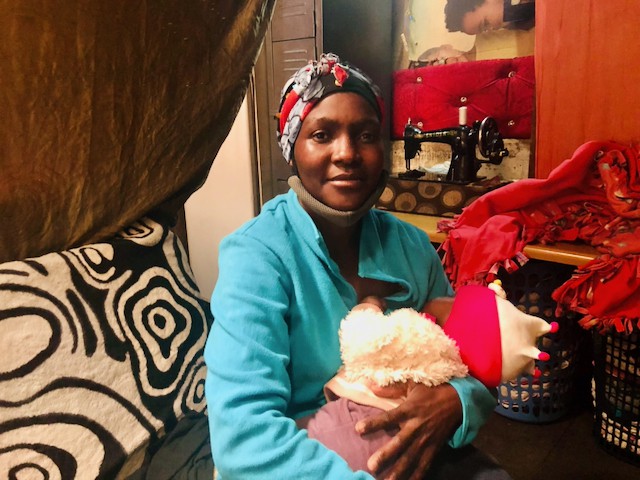 “When they finally evict us from this building l don’t know where l will go. It’s not easy to find a place where one can pay R250 a month,” says Cresenzia Puzi.

Cresenzia Puzi lives with her five-month-old baby and four-year-old child. She has a small sewing business and struggles to pay R250 rent to the owner of her room. She sometimes begs at the traffic lights, especially at month-end when her rent is due.

“When they finally evict us from this building l don’t know where l will go. It’s not easy to find a place where one can pay R250 a month,” says Puzi.

Also facing eviction since 2019 are over 200 residents in a crumbling building on Marshall Street. Many were evicted from other buildings around Johannesburg. They say over the years they have been forced to pay rent to various people who claim to own the building. 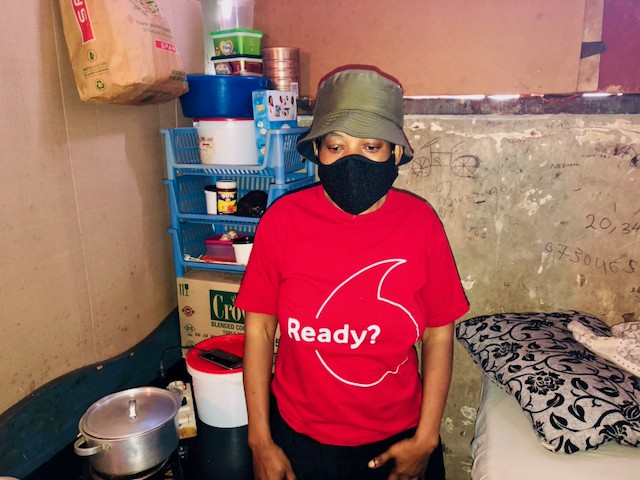 “Besides the police raids, thieves break into our homes at night and steal from us while we are sleeping,” says Shelina Marimo

Shelina Marimo shares a single room and splits the R700 rent demanded of her with her roommate. She begs at traffic lights, looks for piecemeal jobs and collects second-hand clothes to send to her home in Chitungwiza.

“Besides the police raids, thieves break into our homes at night and steal from us while we are sleeping. We do not dare to step into the corridors even to go to the toilet [at night] because many people get mugged. Even so we cannot move elsewhere because rents out there are expensive,” says Marimo. 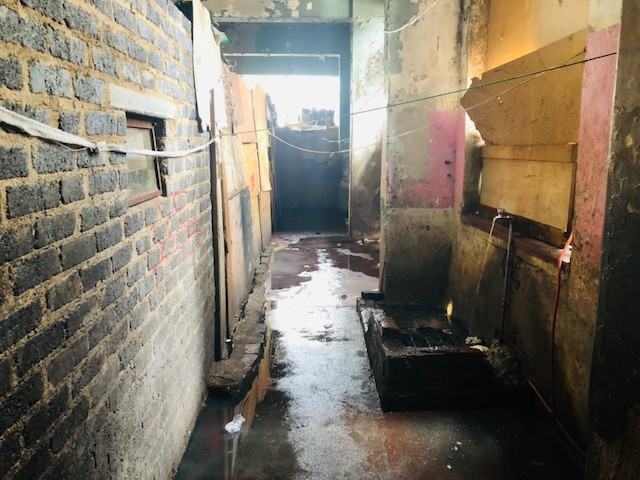 Inside the building where Amanda Macholo lives with her two children.

Amanda Macholo, from Malawi, has two undocumented children, aged ten and 12. The pandemic put an end to her job as a domestic worker.

“We are only happy to have a roof over our heads. My wish is to send my children to school here in South Africa one day. I know the day will come,” says Macholo.

In another building, Faraday Chambers, up to five families share one room. Homeless people also sleep in the passages. The residents were evicted but later returned after legal action. 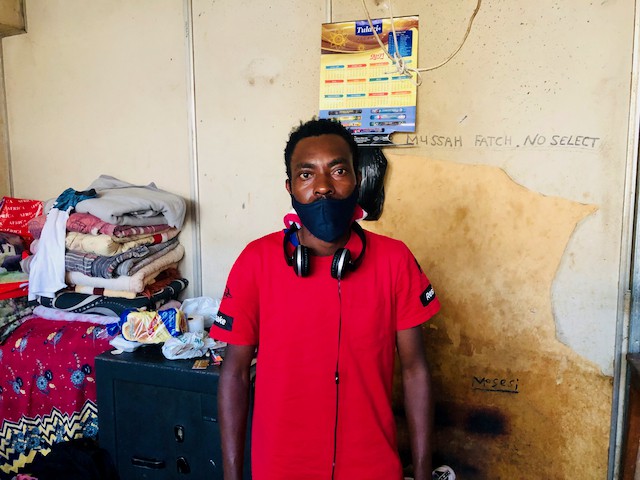 “Being immigrants is not easy because we struggle to find work,” says Fungai Fachi.

Fungai Fachi, originally from Zimbabwe, says, “We are only happy that the landlord agreed to keep us here. Being immigrants is not easy because we struggle to find work. We struggle to even put food on the table and many children are not going to school. But there is nothing we can do because going back home with no money is not an option.” 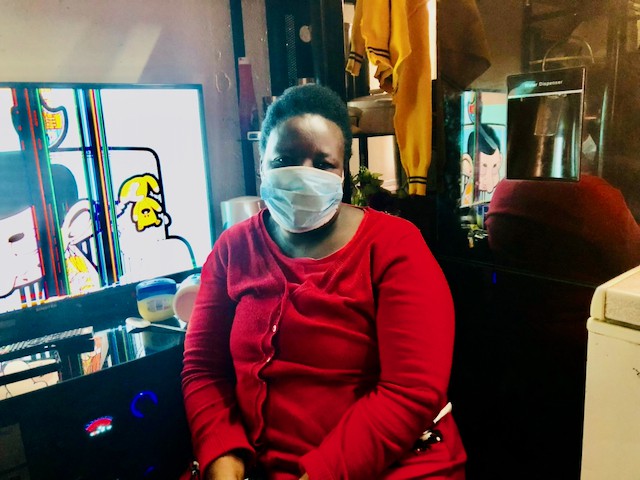 Beauty Chuma sells beer and operates a tuck shop inside one of the “dark buildings”.

Beauty Chuma, from Malawi, sells beer and operates a tuck shop from her room. She manages to support her six-year-old son and sends him to school.

“Being able to send my son to school keeps me strong. It’s the reason why l remain here in South Africa operating my small business because back home l would not be able to. Sometimes l lose stock during police raids but l am not embarrassed to go and ask for money at the robots to restock again,” she says. 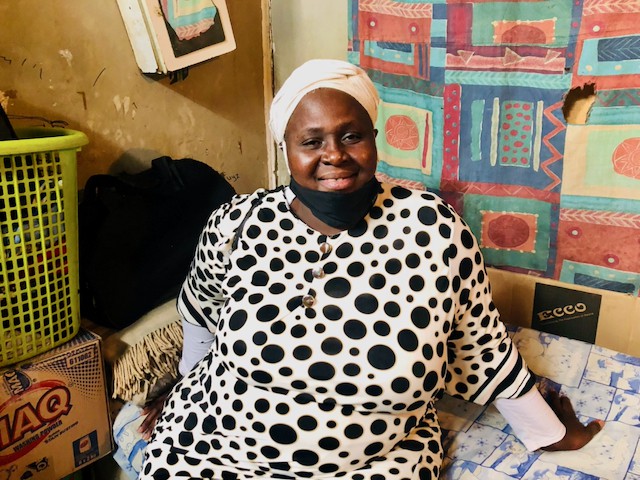 Ethel Musonza, from the organisation Zimbabwe Isolated Women In South Africa (ZIWISA), also lives in one of the dark buildings. Between 2003 and 2017, she was evicted from five different buildings.

ZIWISA focuses on immigrant widows and people with disabilities. “We started sourcing food and empowerment projects for them by partnering with other organisations after seeing how most are struggling. Most of the people survive by begging on the street, doing small businesses, sex work and domestic work, but their lives have become more difficult due to the pandemic,” says Musonza.

“Besides facing evictions, they are targeted by police and deported, yet getting legal papers is difficult. Some children get picked up by social workers while begging on the streets and we’ve had to engage with lawyers to help get the children back,” she says.

“We are determined to fight for the rights of immigrants because they deserve to live dignified lives just like other people and should be treated as such. Immigrant Lives Matter,” says Musonza.

One of the first things I sought to understand better and provide a solution for, was the cross-cutting challenges of inadequate housing, residents living in poorly maintained buildings with no services, residents living far from centres of economic opportunity, and the criminal syndicates operating building hijacking operations in the city of Joburg – particularly, the inner city.
The Inner-City Revitalisation Project, which I launched in 2017, was designed to resolve such issues. At its peak, it led to the expropriation of derelict and abandoned buildings and offered them to the private sector for redevelopment into mixed-use sites, catering for business, accommodation across the income bands (including reserving no less than 30% in each development for low-income households).
154 buildings and 37 factories were identified for release to developers. This produced plans for R32 billion in investment, 21,000 construction sector jobs and 14,500 affordable accommodations opportunities. My End of Term Report expands on this in more detail. Some of these plans were executed during my administration, but I am aware that the ANC-led government of local corruption put a stop to the whole project upon taking office in late 2019.
Getting this project moving again was one of my election campaign priorities and I intend on delivering on that. All ActionSA-led governments which may result from what comes out of the pending coalition discussions will undoubtedly execute similar projects.
It is very important that such projects be executed so as to give residents the dignity of decent and safe housing and communities, which are close to centres of economic opportunity. The intended result of this is that it will reduce their need to spend almost half of their earnings and time on travel to and from work or study, diminishing the quality of their lives as they attempt to improve their material conditions.
Correction on 2021-11-05 14:10

An earlier version of the article incorrectly stated that “mnyama ndawo” is Swahili. It's not.

Ethel Musonza is the correct name. Not Ethel Madzinga.

Next:  Toddler airlifted to hospital after falling into uncovered drain