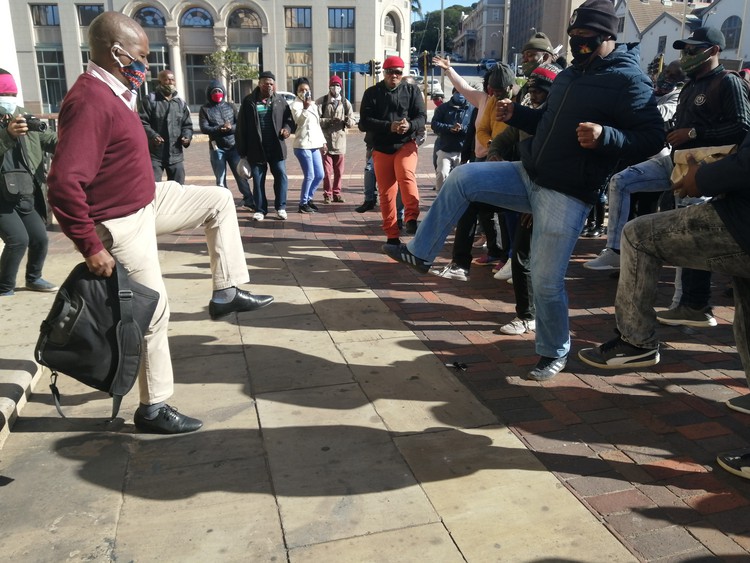 Workers picketed on the steps the City Hall on Thursday. They are demanding to be employed permanently by the Nelson Mandela Bay Municipality. Photo: Mkhuseli Sizani

Dozens of Democratic Municipal and Allied Workers Union of South Africa (DEMAWUSA) members marched through the streets of Port Elizabeth to the City Hall on Thursday.

This after the union took the Nelson Mandela Bay Municipality to the Commission for Conciliation Mediation and Arbitration (CCMA) because of a dispute over unequal pay of outsourced workers and those directly employed by the municipality. The outsourced workers include security guards, meter readers, seasonal workers and municipal plumbers. A meeting at the CCMA to resolve the dispute was supposed to take place on Thursday but municipality representatives could not attend.

In April 2019, GroundUp reported on the demands by municipal security guards to be made permanent. Last year, after another protest, the municipality employed 36 call centre operators in permanent jobs.

In March, workers again protested and handed over a memo of demands which was signed by acting Mayor Tsonono Buyeye. One of the demands was that “left out municipal workers” be permanently employed as per a council resolution made on 4 December 2018.

At the time, Buyeye had said that the National Treasury rejected the 2018 resolution.

On arrival at City Hall on Thursday, the protesters demanded to speak to Buyeye but were told that the mayor’s office was closed after a staff member tested positive for Covid-19.

“We took this municipality to the CCMA because we have asked several times to come to the table and resolve the issue amongst the security guards,” said Siphiwo Ndunyana, provincial coordinator of DEMAWUSA. Ndunyana said there was a large pay disparity between the permanent versus outsourced guards.

Ndunyana said it has been three months since they handed over their demands to Buyeye and are yet to get a response. He said they were frustrated that municipal officials again failed to show up for the CCMA hearing on Thursday. “It’s a lie that the work cannot be done because of Covid-19. These municipal officials are corrupt and have their hands spread all over municipal tenders,” he said.

Ndunyana said they were also demanding an additional R7,000 danger pay as at least 20 workers have been infected with Covid-19.

Lulamile Moolman, strategic adviser to the deputy mayor and acting mayor, apologised to the group on behalf of the mayor. “Our office has been closed after one staff member tested positive for Covid-19. All our other offices have been closed since the lockdown started. The council meeting can’t take place to deal with the National Treasury’s decision to reject the implementation of the resolution,” he said.

Moolman told the group that because the council’s petition’s manager was on special leave he was “unable to check the progress that has been made on your grievances”.

He promised to arrange a meeting with the workers and municipal officials, including the acting mayor on Tuesday.

Next:  People who have recovered from Covid-19 say they are stigmatised