Teargas, rubber bullets and stones exchanged between police and residents 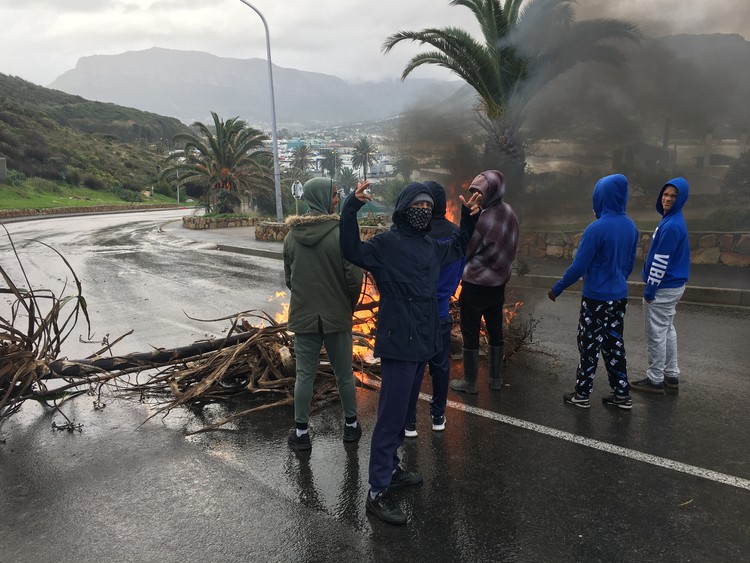 Youths erected a burning barricade following conflict with the police over the demolition of structures on City-owned land. Photo: James Stent

The City of Cape Town’s Law Enforcement and the Anti-Land Invasion Unit, as well as SAPS, carried out a demolition operation in Hangberg, Hout Bay early on Thursday, as a winter storm swept across Cape Town.

Malusi Booi, Mayco Member for Human Settlements, said that the City “dismantled two unoccupied illegally erected structures, one being a half built brick and cement foundation.” He said that no one had been living permanently in the structures and this was not an eviction. “We condemn any violence during protest actions and any damage to people and property due to protest actions,” he said.

Roberto Quintas, the ward councillor, published a statement saying that the operation had been requested by Hangberg residents “who have been pleading that law enforcement agencies halt the illegal land invasions affecting their community”.

Ginola Phillips’s partially-completed house was one of those destroyed in the operation. Phillips said that he had begun building on City-owned land on Karbonkel Road, next to the Little Angels crêche in Hangberg, in late-May. He had been served notice by the Anti-Land Invasion Unit (ALIU) on 3 June to remove the structure, which he was not yet living in.

Phillips said that the ALIU officers who destroyed his house broke many of the materials that he had used, and was not told where the materials were being taken, or how he could have them returned to him.

He alleged that he was manhandled and shot with rubber bullets thrice.

He had been living with his family in a one-bedroom flat in a City-owned block opposite the plot of land. His mother has lived there for 24 years, and Ginola shared the space with five siblings. The cramped conditions in his mother’s home led him to construct his house on the plot of land.

The plot in dispute is part of Erf 5606. On it is The Little Angels Crêche, a donor-funded registered non-profit company operating as an educational centre. There are also five or six completed houses. Phillips’ sister, Pearl, lives in one of them.

In August 2019, the City announced that it intended to lease the entire plot of land to the crêche, despite the plot housing a number of families. Ginola’s house was incomplete so it appears the City could demolish it without a court order. But the conflict over the future of the land remains unresolved.