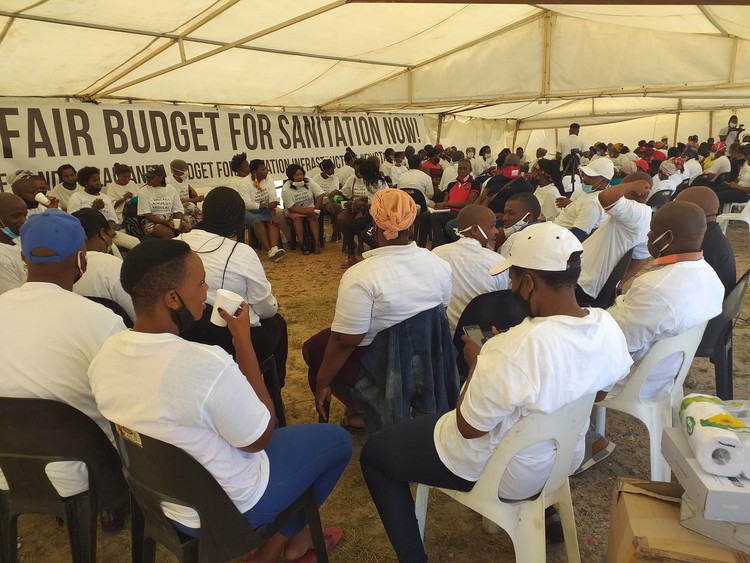 Over 200 people attended a meeting to discuss conditions in informal settlements across Cape Town. The event was hosted by the Social Justice Coalition and other activists in Makhaza, Khayelitsha at the weekend. Photo: Vincent Lali

Lack of electricity, water and toilets; confrontations with law enforcement officers; inadequate cleaning of toilets: about 200 residents of informal settlements shared their concerns at a meeting in Khayelitsha at the weekend.

Thembekile Shici of Empolweni said law enforcement members had “roughed him up” when he fought the demolition of his shack extension. “I extended my shack so that I could have a place where I could cook. When I refused to let them destroy the extension, they dragged me out and bruised my upper body,” he said.

He was speaking to over 200 people who attended the meeting, which was hosted by the Social Justice Coalition and other activists in Makhaza.

Monapi, a community organiser at Ndifuna Ukwazi, said that communities shouldn’t have to use their hard-earned money to hire lawyers, but should rather to approach the organisation for free legal advice.

Nkosinathi Swaartbooi, head of Advocacy and Campaigns at the SJC, told shack dwellers that the Constitution made provision for the delivery of basic services in the informal settlements. “Women should not be killed on their way to far-off toilets, nor should kids go missing as they make their way to water taps located outside their informal settlements,” he said. But, he said, the City of Cape Town’s refusal to recognise newly occupied areas meant they would not receive services.

Nondumiso Mabhele from Hout Bay said in her area families struggled to get ambulances when residents were sick.

Phathiswa Morris from Kraaifontein said: “Our kids fail at school because they can’t do their homework at night without electricity. We are told that our chemical toilets will be cleaned twice a week, but this doesn’t happen. Now they are dirty and fly-infested.”

In response to questions from GroundUp following the SJC event, Malusi Booi, Mayoral Committee Member for Human Settlements said: “In its assessments of the areas, the City’s stance is that the land assessment and physical conditions determines what, if any services, can be provided in terms of emergency relief in the future.”

He said that many of the parcels of occupied land were not suitable for housing or permanent bulk services.

“In addition to the upgrading process to enable space for development in the area, families affected by a fire which occurred in 2013 have been relocated, as promised,” he said.