Our bills are the highest in the Western Cape, says Malmesbury resident 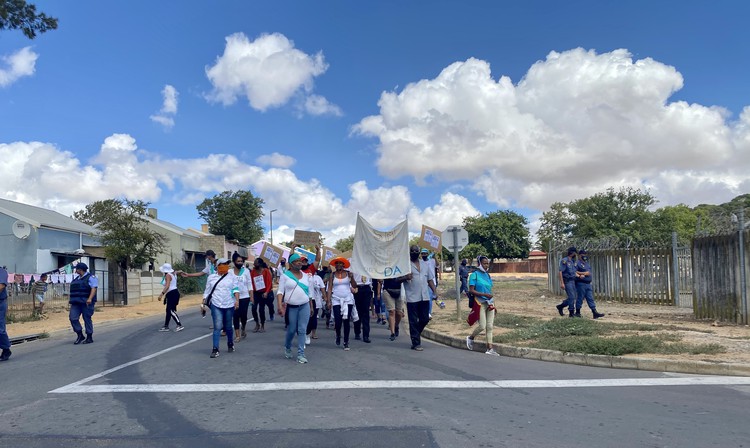 Residents of Wesbank marched through the streets of Malmesbury to demand that the municipality investigate their high utility bills on Wednesday. Photo: Savannah Bacon

Over a dozen residents of Wesbank in Malmesbury, Western Cape, marched through the town on Wednesday to demand the municipality investigate their high utility bills.

The group, led by the Swartland Action Group, marched from the Wesbank Community Hall to the mayor’s office on Church street. One of the group’s leaders, Amber Booysen, handed over a list of demands to Mayor Tijmen Van Essen.

In 2018, the community first raised the issue with the municipality and protested against high water and electricity bills. Residents said that most of the bills did not match their meter readings.

But Booysen said that the feedback they received from the mayor’s office was unsatisfactory and no real change had been made. They decided to again take to the streets.

On Wednesday, residents again expressed their concerns over their high water and electricity accounts, but this time requested an investigation by the municipality into all accounts. The community also demanded that their electricity be supplied by Eskom and not the municipality.

Booysen said that those living in ANC-run wards paid R1.33 per unit for electricity, compared to the R2.33 per unit that her community is charged. “Our tariffs are the highest in the Western Cape,” said Booysen. She complained that Wesbank paid about R300 for sewage, which according to her is far higher than residents under the City of Cape Town.

“For garbage, the City pays R70 and we’re paying R170. We don’t have a bin while [residents in the city] get free bins,” she said.

Booysen is demanding that the municipality acknowledge the various income brackets in the area and charge accordingly. Because the area has not been declared as rural, they are currently being billed the same as townhouses, she said.

The group wants all tariffs to be set aside until an investigation has been done.

GroundUp has asked the municipality for comment. We will update the article when we receive a response.

Next:  Residents of Cape Town informal settlements share their challenges