For two weeks, the walkway of the Waldorf Arcade has housed rows of makeshift bedding, screaming children and exhausted refugees begging the United Nations High Commissioner for Refugees (UNHCR) to remove them from South Africa.

“They are killing us, burning us alive, looting our shops,” said Eke lyke Chibuzor, a refugee from Nigeria, who has been in South Africa for the past six years. “Sometimes I feel like I’m a slave in this country. Our blood does not want to be spilled in the land of South Africa.”

The UNHCR released a statement on 9 October, when the protest started, stating: “We acknowledge the issues they raised, including employment and self-reliance, documentation, and personal security concerns. UNHCR, the UN Refugee Agency, is working closely with the South African authorities to continue providing protection through the issuance of appropriate identity documentation, to facilitate access to health care, education and employment opportunities for all refugees and asylum seekers.” 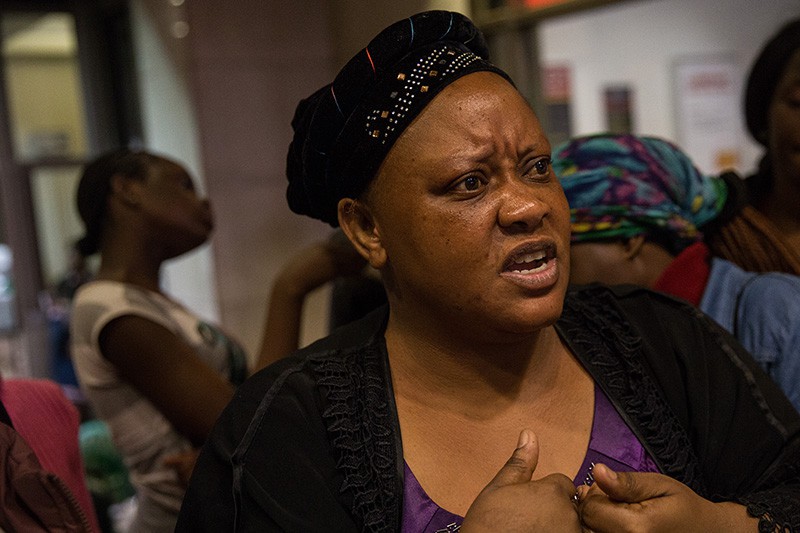 Sylvie Nahimana, from Burundi, spoke out about the struggles she has endured in South Africa as a refugee.

“Some people have asked what’s going on, but they did not send anybody to ask us if we still need documentation and those things,” said Sylvie Nahimana, a refugee from Burundi.

She has lived in South Africa for 21 years.

“All those things we have been asking them for almost 11 or 12 years … We don’t want those things anymore. What we need is just to be out of this country, because we don’t feel safe [here].”

She said it’s too late for negotiations. “We are not moving an inch,” said Nahimana. “We want them to come up with a solution. We want out of South Africa.”

On 14 October, the UNHCR released a second statement citing a two-day visit from the UN Refugee Agency High Commissioner Filippo Grandi. He met with representatives of refugees and asylum seekers and “listened to their concerns, mainly linked to better access to documentation and information, the process to obtain refugee papers, as well as issues of personal security”.

The statement noted that Grandi “told [the refugees] that UNHCR will continue to develop its dialogue with them…”. 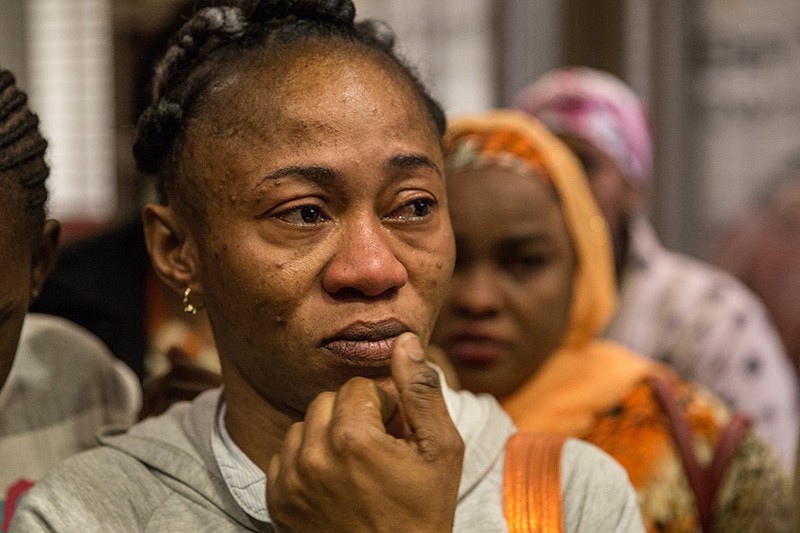 Francine Kinavuidi, from the Democratic Republic of Congo, has lived in South Africa for 15 years. She still receives xenophobic threats from co-workers.

“Where I’m working right now, the decision has been made, no more foreigners will be hired,” said Francine Kinavuidi, an asylum seeker from the DRC who has lived in South Africa for 15 years. “My general manager told me, ‘Guys don’t send me any foreigners, because we’re not hiring foreigners anymore.’”

Kinavuidi said she’s seen employers ask if someone is a citizen when applying for a job. She’s seen them tear up the CVs of foreigners. “Some of my colleagues are telling us, if you come stay where we are staying, because it’s cheaper, we will kill you one by one.” 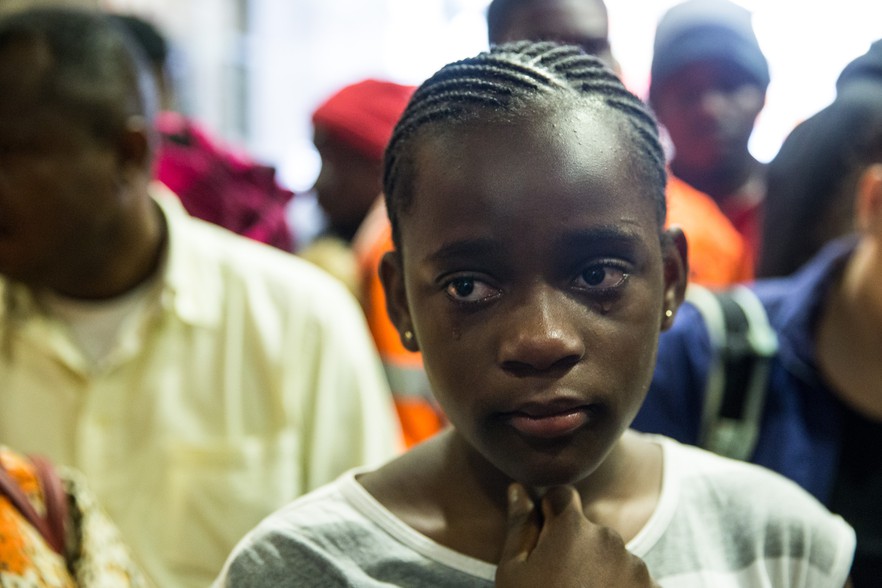 Dje Dje Kapingo holds back tears describing the bullying she has faced at school since coming to South Africa from the DRC. (Publication of photo approved by her mother)

“Some children are getting abused at school and bullied by the other South African boys and girls,” said 12-year-old Congolese refugee Dje Dje Kapingo. “Teasing you, swearing at you, teasing your country. That makes other kids hurt … We had to leave our country and come here for safety. Where we are right now, it’s the same thing that happened in our country. So that’s what makes us a little sad, that we are in a bad place.”

As she began tearing up, women around her wept. “We’re just looking for a safe place,” said Kapingo.

Social workers have visited the arcade to check on the children, but no further action has been taken.

The UNHCR released a third statement on 16 October, saying “Grandi commended South Africa’s commitment to protecting people fleeing countries affected by conflict, violence and persecution” and “noted that resettlement to third countries is a very limited option for refugees worldwide, as the number of resettlement places available globally is unfortunately dropping. For most refugees here in South Africa resettlement is not an option.”

This alarmed protestors who seek to leave the country. “It’s better to live in a prison than to live in South Africa,” said DRC refugee Kande-Serge Kande. “You know, in the prison the police will take care of you. It’s not human for someone sitting in an office to say there is no solution.” 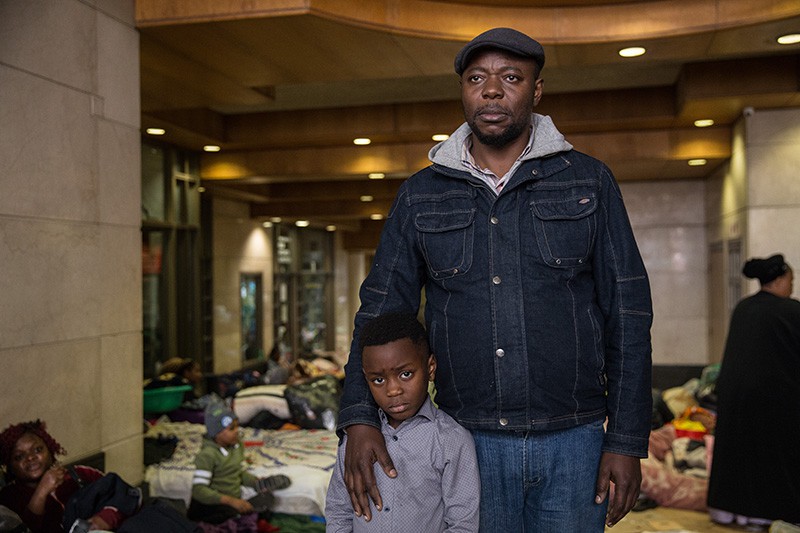 Kande-Serge Kande stands with his son pleading for the UNHCR to let refugees leave South Africa. (Publication of photo approved by Kande)

“Please, I’m begging you. I will ask you as a journalist to be a witness. If they do not remove us, people will be killed and they will be responsible. We are not asking for food, shelter or money. We just want to leave.”

According to the UNHCR, 268,000 refugees and asylum seekers are currently living in South Africa.

Those staying in the Waldorf Arcade have made it clear, the only way they’ll move is if they are relocated out of South Africa. “We’re not going anywhere,” Nahimana said.

Next:  Thugs scare municipal workers away from broken township drains