Wearing raincoats and holding umbrellas, a lively group of over 500 school learners braved the rain and cold weather and marched to the Western Cape Provincial Legislature on Friday. The protesters, organised by Equal Education, demanded safer schools.

“We are here to tell them that they should prioritise safety because we’re not safe inside and outside our schools,” said Liyema Avela Saliwa, a 15-year-old learner at Oaklands High School.

Saliwa, who is also an Equal Education representative, said that they decided to march because the Western Cape Education Department did not make school safety a priority in Cabinet. She said that schools are plagued by violence and gangsterism.

“In order for learning to take place successfully, we need to be safe,” said Saliwa.

The march began at Hanover (formerly Keizersgracht) Street where learners from various Cape Town high schools arrived in about 20 taxis and warmed up by singing and dancing around the parking lot.

“A few weeks ago a school guard was stabbed inside the school in the morning,” said a grade 10 learner at Cedar High School in Mitchell’s Plain. The learner said gang violence was a huge concern in the school and that more security guards along with CCTV were needed. “I didn’t come here just for my school. There are some schools that are not part of the Equal Education movement so I came here to speak for the others as well, not just my school.”

An increase in the number of school stabbings across the country was noted by Parliament on 11 October.

The group then marched along Darling Street, carrying a banner that read: “We demand safe schools.” As they passed City Hall, the learners waved to the statue of Nelson Mandela before continuing on to the Western Cape Provincial Legislature.

“For me, at my school, we’re struggling because we’re next to a highway,” said a grade 10 learner at Gordon High School in Somerset West. “We’re trying to change the road and build a bridge to make it safer for kids to cross.”

A memorandum of demands was handed over to the Western Cape Education Department (WCED), South African Police Service (SAPS) and provincial Department of Community Safety.

Learners want the department to create and support school safety committees. These committees should then also be supported by SAPS. Part of the memo states that the WCED must produce a plan to monitor and enforce the implementation of school safety policies within the next six months.

The memo was received by Sigamoney Naicker, an official in the education department. “We share Equal Education’s concerns for safety. We will work closely with all interested parties to address the issues of school safety. Every school must have a safety committee responsible for a safety plan. We welcome the participation of [Equal Education’s members] in this process,” said Naicker.

Abdool Karim is a Daily Maverick intern seconded to GroundUp. 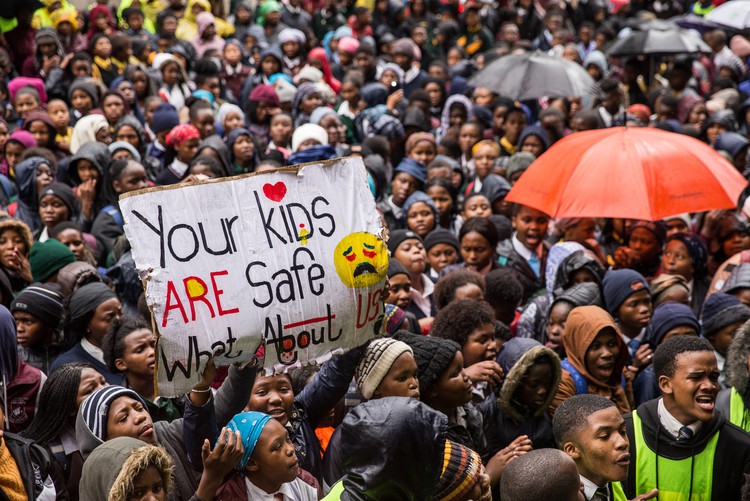 Next:  “Our blood does not want to be spilled in the land of South Africa”