Delegates storm out of NUMSA conference

NUMSA must comply with its constitution, say protesters as congress continues without Mpumalanga delegates 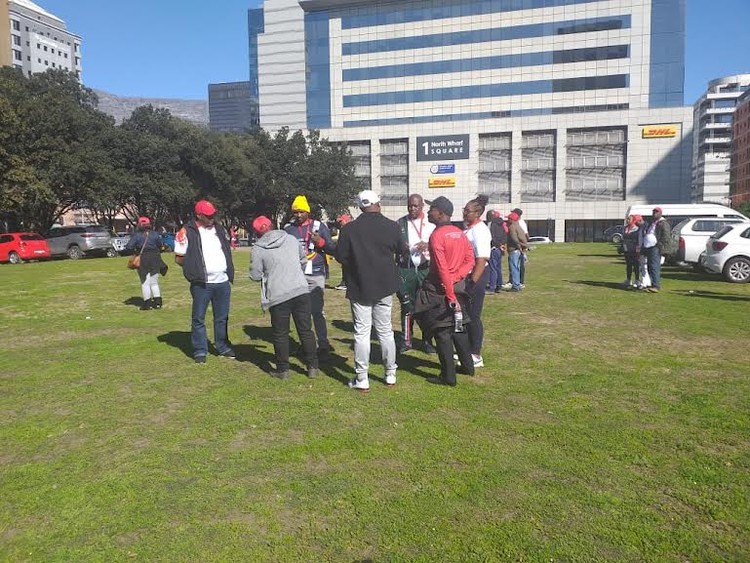 The NUMSA congress went ahead this week in spite of a court interdict, but without delegates from Mpumalanga. Photo: Vincent Lali

Western Cape and Gauteng delegates stormed out of the national congress of the National Union of Metalworkers of South Africa (NUMSA) at the Cape Town International Convention Centre on Wednessday, demanding that NUMSA must “comply with its own constitution”.

Minutes of the credentials committee convened on Tuesday show that Mpumalanga region has been denied any delegates at the national congress.

On Wednesday morning, NUMSA’s general secretary Irvin Jim said in a press statement that, “the NUMSA 11th NC is proceeding as planned and in full compliance with the Labour Court’s judgment (irrespective of the fact that the judgment has been suspended as a consequence of the filing of NUMSA’s application for leave to appeal against the said judgment).”

Contrary to claims made by NUMSA spokesperson Phakamile Hlubi-Majola to GroundUp that all nine regions were present, Mpumalanga Region is not participating in the national congress.

According to the minutes of the special credentials committee held yesterday, the Regional Secretary of JC Bezuidenhout Region, Mncedisi Kwababa, “did not believe that the Mpumalanga region should be accredited delegates to form part of the 11th National Congress”. This was supported by a majority of regional secretaries on the committee. As a result, there are no accredited delegates from the Mpumalanga Region.

In the Johannesburg Labour Court on Saturday, Judge Graham Moshoana ruled that decisions of the union’s central committee to suspend a large number of members, including the union’s second deputy president Ruth Ntlokotse, and to place the Mpumalanga Regional Council, NUMSA’s largest region, under ‘administration’ were “unconstitutional, invalid and unenforceable in law”. On Tuesday NUMSA filed leave to appeal the interdict handed down by Judge Moshoana.

But while Jim and a majority of central committee members believe that the union has met the constitutional requirements identified by Judge Moshoana, NUMSA members at the national congress from the Western Cape and Gauteng vehemently disagreed.

Dissent at the congress

Vuyo Lufele, Western Cape Regional Secretary and one of the suspended NUMSA leaders, said the Western Cape delegates were the first to leave the congress. Lufele was suspended after raising concerns about the running of 3Sixty Life, a funeral insurance company owned by NUMSA.

“We marched out because this congress has been interdicted until NUMSA complies with its own constitution. Until it does so, we will not be part of this congress,” he said.

Lufele said the delegates would “fully participate” if NUMSA acts in agreement with its own rules.

Lefele said delegates were outraged because Mpumalanga delegates “were not accredited to attend this congress.”

Serema Tsotetsi, a motor bargaining council representative from Ekurhuleni, said he walked out of the congress because he was unhappy that Mpumalanga delegates were absent from the congress.

“I want Mpumalanga delegates to be here to choose their own leaders,” he said.

Tsotetsi said NUMSA leaders had “prevented some Eastern Cape and Mpumalanga delegates from attending the congress to avoid contestation.”

“Everyone knows that if a congress has been interdicted you must make another notice within six months that we will hold another congress,” he said. “Only members of the Irvin Jim faction are still attending the congress. They want to steal the congress.”

But a delegate who did not want to be named disagreed with delegates who marched out of the congress. “They received their mandate from the factories, regional and local structures, so what are they going to report back to them now?” he asked.

Earlier in the day, lawyers for Ruth Ntlokotse sent NUMSA a letter of demand. Ntlokotse asserted that NUMSA was not complying with the terms of the interdict, and requested the minutes of yesterday’s special meeting of the central committee and of the credentials committee that was constituted immediately afterwards.

Lawyers for NUMSA replied to Ntlokotse that they could not yet produce the requested minutes, but affirmed that their clients had “acted in compliance with the constitution”.