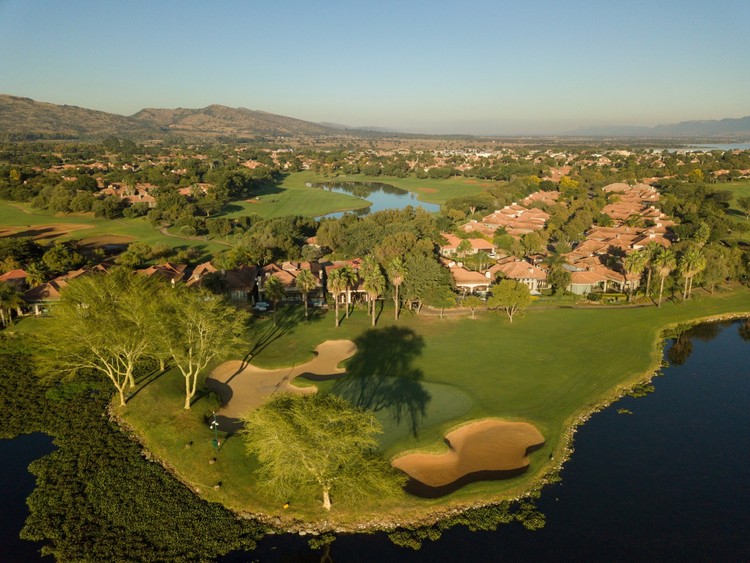 The Commissioner of the National Lotteries Commission Thabang Mampane’s trust owns a house on the Pecanwood golf estate, bought with money from the national lottery. Photo from the Pecanwood website: https://pecanwood.co.za, published as fair use

Millions of rands in Lottery money intended to build a school in Limpopo were spent on a house for the Commissioner of the National Lotteries Commission (NLC), Thabang Mampane.

The money for the house, in an upmarket golf estate close to Hartbeespoort Dam in North West Province, was channelled through Upbrand Properties, a private company closely linked to the NLC’s Chief Operating Officer Phillemon Letwaba and his family.

The R3.6-million house in Pecanwood Estate is registered in the name of the Mojakgomo Family Trust. Mampane and her husband, Solomon, are both trustees of the trust, according to official records.

The couple and their two adult children are all beneficiaries of the trust.

The Mojakgomo Family Trust was established on 15 August 2016.

On 29 August 2016, a non-profit organisation, Simba Community Development Foundation, received more than R25-million — the first tranche of a R28.3-million grant — to rebuild Vhafamadi school, which had been gutted by fire during protests the previous year. On the same day, Simba paid R4-million to Upbrand Properties. Before the deposit by the NLC, Simba had a balance of only R225.73 in its bank account.

At the time, Johannes Letwaba, the brother of Phillemon Letwaba, then the chief financial officer of the NLC, was the sole director of Upbrand Properties.

Before the payment from Simba, Upbrand had a balance of R100,201 in its bank account. As soon as the money landed, Upbrand proceeded to make numerous payments, including R100,000 for the roof slab for Letwaba’s home in the village of Marapyane in Mpumalanga.

By 12 September the balance in the account had dropped to R3,514,821 - until it was topped up by a R500,000 deposit from Ironbridge Travelling Agency that same day. Letwaba’s wife, Rebotile Malomane is now a director of Ironbridge. Letwaba’s cousin was the sole director at the time.

The next day, three separate payments – R68,600, R20,000 and R24,240 – came into Upbrand from Shandukani Holdings, which did some of the construction work at the school. Shandukani’s owner, Mashudu Shandukani, said: “2016 is the year we were building Vhafamadi secondary school. Upbrand properties were the nominated civil and earthworks contractor. We paid them for the work done.”

With the account topped up, Upbrand then paid R3.6-million to Jacobs Robbertse Attorneys, the lawyers acting in the sale of the house to Mampane. The purchase price was paid in full and no mortgage bond was registered over the property.

Upbrand also made an additional payment of R269,848 to cover transfer and legal costs. The house was registered in the name of the trust on 1 December 2016.

The payments from Simba to Upbrand, and then to Jacobs Robbertse, are reflected in Simba and Upbrand bank statements, which GroundUp has seen.

Simba is headed up by Azwindini Simba, a boxing promoter with no experience in construction. The company was dormant at the time it received the grant and was not compliant with statutory Department of Social Development (DSD) requirements, according to the department’s records.

Simba supplied financial statements with its application to the NLC, but according to a well-informed source, it submitted an affidavit to the DSD claiming no financial activity during the financial year when the grant was awarded.

The financial statements included in the NLC application are believed to be fraudulent, according to the same source.

The grant of R28.3-million to Simba to rebuild Vhufamadi was recommended to the NLC’s board by Mampane and the chairperson of the Commission’s Charities distributing agency.

NLC spokesperson Ndivhuho Mafela said in an emailed response to GroundUp’s questions, “The issues and transactions referred to in the inquiry are currently being canvassed through an investigation the Special Investigation Unit (SIU) is conducting on the affairs of the National Lotteries Commission.

“At this stage, the NLC will not be commenting on media inquiries that require details of grants awarded between 2014 and 2020 as well as related transactions. This is to allow the SIU to conduct this investigation without any hindrance or prejudice.”

Mampane had not responded to questions sent by GroundUp by the time of publication.

Millions in, millions out

Bank statements show how, after it received the first tranche of over R25-million, Simba made three payments totalling R15-million to Mshandukani Holdings, which built parts of the new Vhafamadi School. But Simba also immediately began paying millions to companies that had nothing to do with the school.

Simba had only R225.73 in its account before the NLC payment landed.

Besides the R4-million paid to Upbrand, other payments by Simba include:

Within 12 days of Simba receiving the Lottery grant, the balance in its bank account had dwindled to R2.4-million.

This means that the purchase price of the Mampanes’ property, as well as the transfer duty and lawyer’s fees, was paid by Upbrand Properties, from Lottery money.

In 2018, the NLC lodged a complaint with the Press Ombudsman about GroundUp’s reporting on the Vhafamadi school project but withdrew it before it could be adjudicated.

The R100 fee paid to the Master’s Office to register the Mampanes’ Mojakgomo Family Trust was paid by the Malwandla Siweya Family Trust on 12 August 2016.

Malwandla “Solly” Siweya is involved with non-profit companies that have received tens of millions of rands in Lottery grants. Lulamisa Community Development, a dormant non-profit organisation, received R80-million for a sport-related project. Both the NLC and Lulamisa have previously refused to say what the money was for and how it was spent.

Lulamisa and Siweya also featured in a R25-million grant to the South African Sports Association for the Intellectually Impaired (SASA-II), a sports body for intellectually impaired athletes, to host a Bloemfontein event. How the money was spent is not clear.

Siweya was also the middleman in the purchase of a luxury house in Bryanston, in Johannesburg, by Upbrand Properties. Then Sports Minister Fikile Mbalula and his wife originally made an offer to purchase the house, but then withdrew. The deal went ahead with exactly the same terms and price, but with Upbrand as the buyer.

And Siweya helped arrange a holiday for Mbalula, then Minister of Sport, and his family in Dubai in December 2016, according to a report by Public Protector Busisiwe Mkhwebane. Mkhwebane found that Mbalula had violated the Executive Ethics Code.

The purchase of Thabang Mampane’s house is not the only example of how Lottery money was used to buy or build luxury homes.

Apart from former National Lotteries Commission board chair Alfred Nevhutanda, over whose luxury home the SIU has been granted a preservation order, other NLC bigwigs have managed to siphon off money for residences.

GroundUp revealed early last year how another Lottery grantee paid R5-million towards a luxury home on a sprawling estate in North West Province, which was purchased by a company belonging to former NLC board member William Huma.

Leaked Upbrand Property bank statements have shown how money has been funnelled from several non-profit organisations into Upbrand Properties to finance some of these purchases. These include deposits of over R5.6-million by the Southern African Youth Movement (SAYM), which received over R51-million in Lottery grants for a variety of projects. An old age home and a drug rehabilitation centre that SAYM received funding to build are yet to be completed.

Another Lottery-funded old age home in KwaZulu-Natal, which is also yet to be completed, made deposits totalling over R3.85-million into Upbrand’s FNB account. And almost R300,000 was deposited by Mushumo Ushavha Zwana, a hijacked non-profit organisation that has received R26-million to build an old age home in Limpopo. The site has been abandoned.

The bank statements also revealed how Upbrand, in turn, contributed towards a luxury house Letwaba built in his home village of Marapyane in Mpumalanga. A Lottery-funded old age home a kilometre from Letwaba’s house is still unfinished.

This article has been updated to include the correct spelling of Jacob Robbertse Attorneys, Mshandukani Holdings and William Huma.

We have removed a paragraph that made claims about disciplinary action being faced by Mampane. We regret the error.

Next:  Pigs swim in the sewage outside my house, says protester