Services gradually being extended on other lines 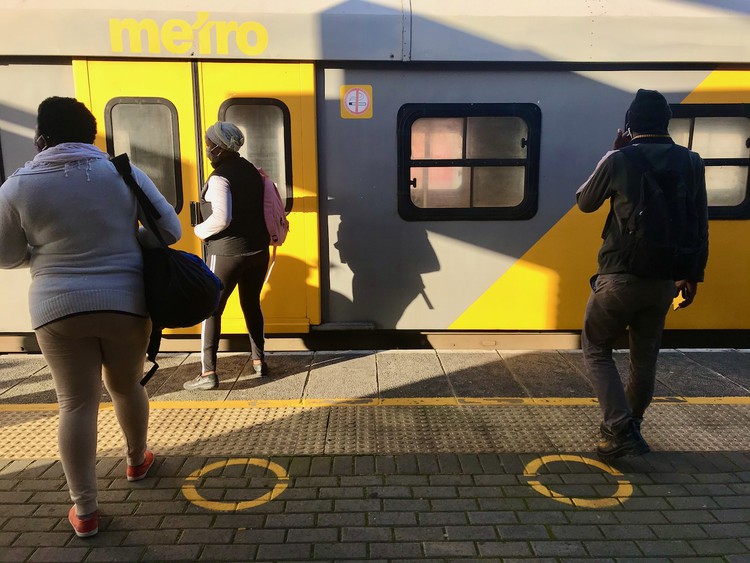 Commuters at Salt River station said they are pleased with the current resumption of services on Metrorail. Photo: Tariro Washinyira

Cape Town’s Central line, the busiest line serving the poorest communities, including Khayelitsha, Mitchells Plain, Nyanga and Bonteheuwel, was last operational in October 2019. Metrorail spokesperson Riana Scott told GroundUp on Thursday that at this stage “there is no estimated date” for a return to services, because damage to the line through theft and vandalism is “significant and extensive”.

She said services on other lines can only be gradually resumed. “During lockdown metal theft and vandalism continued. Criminals did not heed lockdown rules and as the economy worsened under Covid-19, burglaries, break-ins and theft at closed stations and offices rocketed.”

She said, “From mid-September onwards we should be able to extend the service to Simon’s Town where a pothole needed to be repaired. Towards the end of September or early October, the service to Bellville via Monte Vista / Wellington / Eerste River may be able to resume after the necessary repairs have been completed.”

Asked why trains are not stopping at certain stations, she said, “Under current level 2 regulations not all employees are yet back at work. As conditions ease and more resources become available, stations will incrementally re-open. Some stations have been vandalised and need repairs before these can open.”

Cape Flats commuters told GroundUp on Thursday that they were happy service has been restored to Retreat. In July we reported that commuters were walking to Mowbray where they then took a train to Retreat to enable them to save a few rands.

A police patrol, marshals and security were noticeable at Salt River station on Thursday. Police were on the train carriages. Marshals also enforced physical distancing and proper wearing of masks on the train. The Voortrekker Road entrance remained closed and only the Foundry Road entrance was open. Commuters’ hands were sanitised on arrival.

Commenting on the visibility of security, Scott said, “Metrorail is participating in a joint operation to address theft and vandalism. Normal train patrols continue during and after the operations.”

We took a train to Retreat at 8:30am and arrived at 9am. The carriage was half empty and the train did not stop at various stations, including Newlands. Trains were passing every 30 minutes to and from Cape Town.

At Salt River we spoke to several commuters who said they were happy with the service so far. They have not been experiencing the usual problems such as delays, overcrowding, cancellations and trains stopping in the middle of nowhere.

One of the commuters, Siyoyo Xanise, said he stays in Salt River and has been working in Newton near Wynberg. He started using trains when they resumed in July. For much of lockdown he used a taxi, spending R170 per week. But now that he is using a train again, he is spending R50 a week. “It has been good. Trains are going fine and there is no overcrowding yet.”

Deputy-general Secretary of United National Transport Union (UNTU) Sonja Carstens in an email on 27 August said that the Passenger Rail Agency of South Africa (PRASA) experienced unprecedented vandalism of its rail infrastructure since the dismantled Board of PRASA cancelled the security contracts of 20 security companies. “These attacks on PRASA’s infrastructure intensified during the Covid-19 lockdown when no passenger trains were allowed to run a service.”

“PRASA managed to lease 34 diesel locomotives from Transnet of which they have received 12 to date to run a service with. Four are being used on the Pienaarspoort/Pretoria line, two on the Leralla line in Vereeniging, two on the KwaMashu line in Durban and four on the Southern Line in Cape Town.”

“PRASA is in the process of appointing its own security and waiting for Transnet Freight Rail to release more diesel locomotives from its fleet. According to PRASA’s planning six additional routes will be operational from 1 September 2020 and the remaining routes from October 2020.”

But UNTU was skeptical because of “ongoing cash flow problems PRASA is experiencing and its inability to pay several creditors”, which included “overtime payment due to employees”.

It said Covid-19 was a “smokescreen”. “PRASA is paying the price for the poor decisions of its disbanded board” and “those individuals board members who took the decision, should be held responsible for the consequences”.

Previous:  Lockdown in pictures - Day 154: Yards are the new playgrounds