Showdown in Dunoon over toilet companies 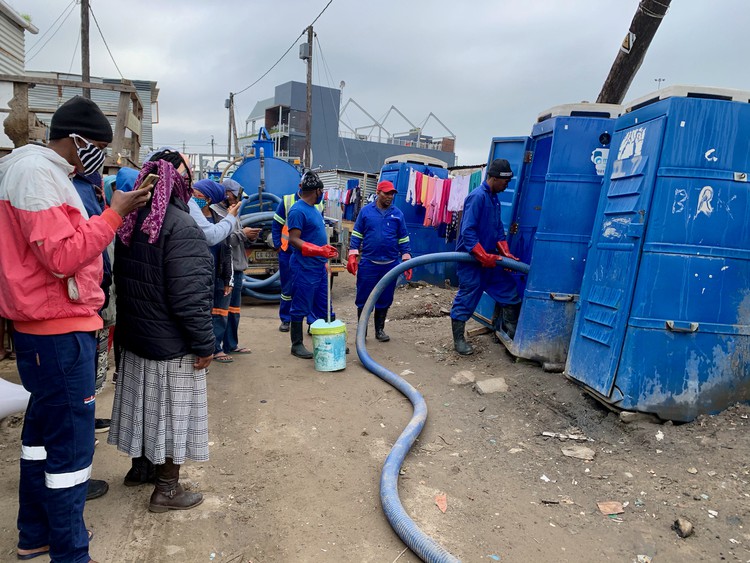 Dunoon informal settlement residents have continued to stop the new City of Cape Town toilet contractor, Sanitech, from providing services in the area. They have petitioned the City to keep the previous contractor, Mshengu, whose contract expired on 30 June.

Dissatisfied with the City’s response, residents emptied buckets of faeces on the N7 on 17 August in protest. A week later, residents pleaded with Mshengu Toilet hire to come back and clean their toilets for them, praising the company’s past good service.

Mshengu sent eight trucks and accompanying staff to pump faeces out of the communal chemical toilets in eight informal settlements, free of charge.

Mshengu Toilet Hire operations manager Benjamin Milandou said: “We received an email from the Dunoon leaders requesting that we go clean the toilets. We had no option but to go.”

South African National Civic Organisation (SANCO) Dunoon branch deputy chairperson Messie Mpukane said residents have made it clear that they don’t want Sanitech, which was awarded the toilet cleaning tender on 29 April, and was meant to take over from Mshengu on 1 July.

Mpukane said: “How can you give a tender to someone who has failed dismally? When Sanitech was subcontracted to Mshengu it failed.”

Mayco Member for Waste and Sanitation Xanthea Limberg, in previous responses said: “The City assures residents that once the new contractors have provided the replacement chemical toilets, their work performance will be closely monitored to ensure they are providing the service according to the conditions of their contracts.

“We encourage residents to give the new contractors the opportunity to provide their chemical toilets so that their service can be assessed once underway. The City will continue to monitor their operation and will take necessary action if they are not adhering to agreed service standards.”

Commenting via its PR company, Sanitech’s managing director Robert Erasmus said: “Mshengu sent trucks without permission from the City. Sanitech expects to be able to roll out services by 22 September.”

Previous:  Relocation of 1,500 Dunoon families postponed until at least next year