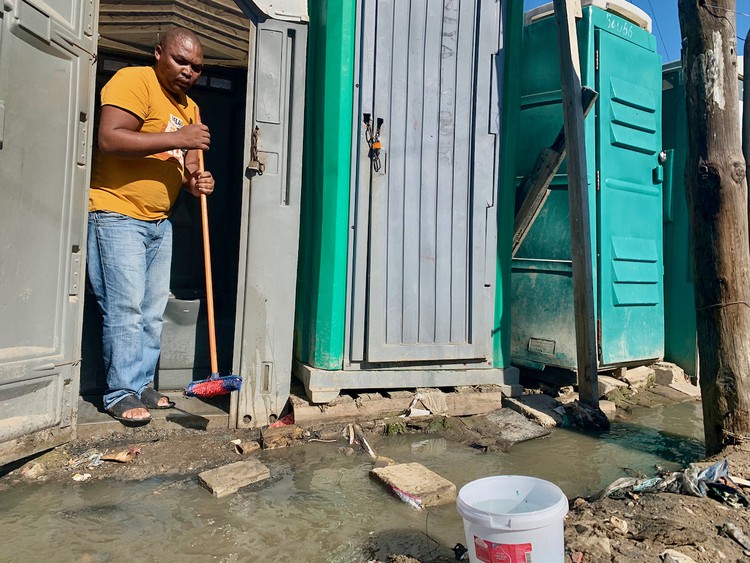 Dunoon residents say Sanitech has not cleaned their toilets for two weeks. Liveni Gqwethe says every time he wants to use the toilet, he takes a bucket filled with water and cleans it himself. Photo: Peter Luhanga

A petition with 5,179 signatures from informal settlement residents in Dunoon was submitted to the City of Cape Town on Friday, expressing residents’ opposition to the appointment of Sanitech Toilet Hire as a new contractor to install and clean communal chemical toilets in seven informal settlements in the township.

Mayco Member for Water and Waste Xanthea Limberg confirmed receipt of the petition.

The estimated tender value given to two service providers, one of which is Sanitech, is approximately R346 million for the three-year period.

Residents accuse Sanitech of installing broken toilets and not cleaning them as contracted.

On Tuesday GroundUp visited Siyahlala informal settlement where one toilet is used by 20 residents and there is a single tap 300 metres away. Some of the toilets we saw have worn out septic tanks. Residents have resorted to buying plastic drums for R50. They cut these in half and insert them underneath the toilet to use as septic tanks.

Matomela says according to the City contractual obligations, the toilets are supposed to be cleaned and emptied three times a week.

Matomela says they have tried to engage Sanitech to improve its service but nothing has improved, prompting the circulation of the petition seeking the City to appoint a different contractor.

He says residents want the previous contractor, Mshengu Toilet Hire, to be reinstated as it ensured the toilets were well maintained.

“As the community we are blaming the City. They are not supervising the contractor. They just award the tender, after that they don’t do monitoring, overseeing whether the new contractor is adhering to contractual obligations. The government must stop deciding for the people. They must engage and hear the side of the community before awarding a tender. There must be public participation,” said Matomela.

Limberg says the City has followed due procurement processes as stipulated by Supply Chain Management rules. She said a competitive process was followed and the contract was awarded on 29 April to Sanitech in Region 1, and to Moreki Distributors in Region 2.

She said the City will be consider the petition and issue a written response.

“The new contractor’s performance will be closely monitored, and due process will be followed if they are found to not be providing services at the required standard,” Limberg said.

She said Sanitech has provided Dunoon with 90 toilets in one section and 140 in another.

“The remainder of the units will be placed as work progresses in consultation with Dunoon leadership and residents,” she said.

But Matomela said residents would not allow Sanitech to deliver toilets and would prevent Mshengu from removing those that belong to them.

“If our toilets are not cleaned we will empty the faeces on the N7,” he said.

We approached Sanitech Toilet Hire for comment. We said we had a detailed comment from the City but wanted the company’s side of the story. We were told the company is a client of the City and not at liberty to speak to the media. 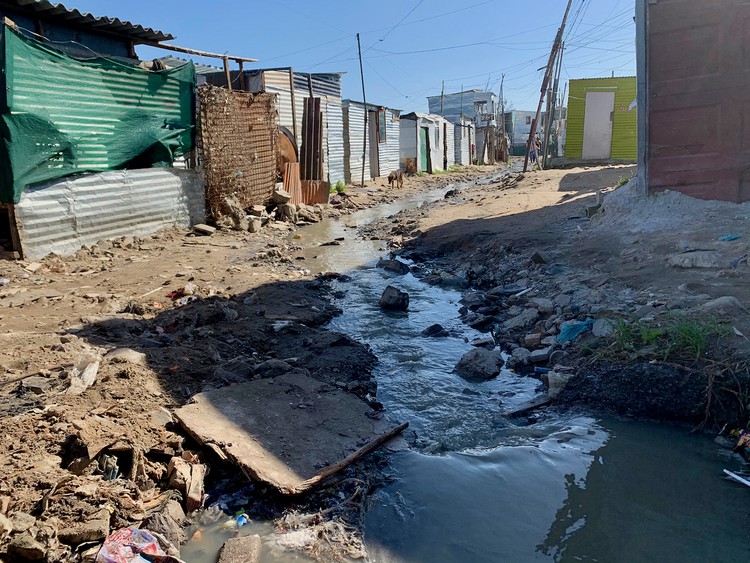 Sewage runs down the road at the back of Silver Leaf Primary School and flows past people’s shacks. Residents put down sand bags to divert the stinking sewage flooding their homes. Photo: Peter Luhanga

Next:  Toilets overflow for a month as City drains clog up