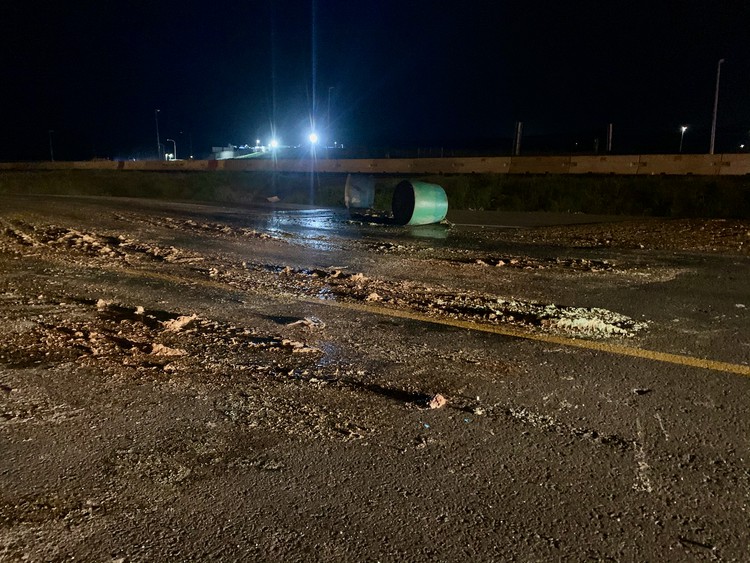 With bare hands, residents removed septic tanks from communal chemical toilets, loaded them on shopping trolleys and emptied them at the exit of N7 at Dunoon, near Milnerton, CapeTown, on Sunday.

The residents from Ekuphumuleni informal settlement have not had their toilets cleaned for three weeks after they stopped a newly appointed contractor, Sanitech, from entering the area, accusing it of poor service.

Dunoon residents had threatened to empty toilets on the N7 in July.

At 9pm on Sunday, traffic officers were at the scene. Two septic tanks could be seen at Malibongwe Drive exit.

On Monday, a community leader told GroundUp that the decision to strew faeces on the road was taken at a meeting on Sunday. She said 20 septic tanks were emptied before being returned to the toilets. She said septic tanks will next time be emptied at the nearby suburb of Richwood, if the City of Cape Town doesn’t take notice.

The toilets that were emptied on the N7 belonged to Mshengu Toilet Hire, the previous contractor. Benjamin Milandou, the company’s operations manager, said the City had on 18 June undertaken to provide the company with security so it could collect its toilets in Dunoon, but this had not happened.

“We have roughly over 1,000 toilets in Dunoon,” said Milandou.

South African National Civic Organisation (SANCO) Dunoon branch chairperson Sinethemba Matomela said residents were angry because the City had not responded to their petition of 24 July.

Matomela said Sanitech had previously been a subcontractor to Mshengu Toilet Hire, and residents said its service was poor.

“As a SANCO leader we condemn things like that [poo protests], especially if it’s going to affect other people. We can’t stop people when they are angry. The City needs to come and engage with leaders properly,” said Matomela.

Sanitech managing director Robert Erasmus said their technicians were being threatened by some community members and blocked from delivering sanitation services to residents.

“We are working with the City to engage [Dunoon] community leaders and ensure that the people for whom the services are intended, are not prevented by others from benefiting from them. We urge the individuals impeding our ability to fulfil this commitment to allow Sanitech the opportunity to demonstrate value by enhancing community access to beneficial sanitation solutions in the interests of all.”

The City of Cape Town had not replied at the time of publication.

Next:  Concourt efficiency is declining

Previous:  Lockdown in pictures - Day 144: Drenched by the rain