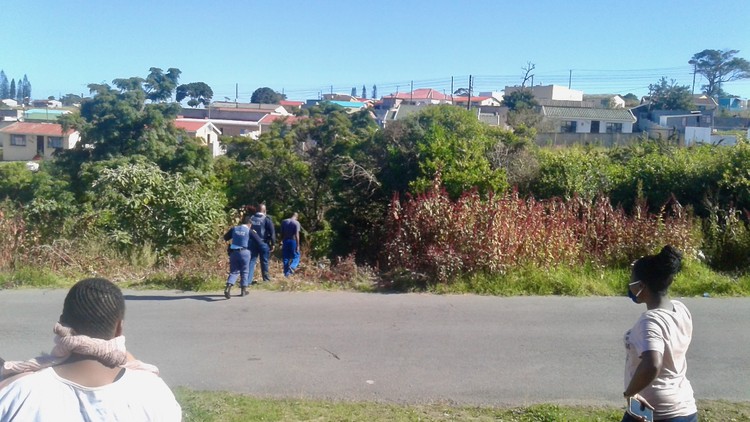 Community leader Sakhumzi Magele leads police to where a dead baby was found. Residents threatened to march to the ward councillor’s office after the grim discovery. Photo: Nombulelo Damba-Hendrik

A river with big trees and thick bush lies between sections 77 and 78 of Mdantsane NU3, East London. Residents using public transport must pass nearby. They say criminals lie in wait for them, hidden in the bushes, and the place is used for various illegal activities.

For the past nine years residents have been asking the Buffalo City Metro Municipality to clear the area, but nothing has happened. They say they are terrorised by thugs who use it as a hideout. Youngsters also go there to smoke dagga, they say.

“For years we have been complaining about these bushes. We are robbed here, and as for women being raped here, we’ve lost count,” said a resident.

A woman who lives in section 77and wished to say anonymous told GroundUp she was dragged into the bushes and raped by two men in 2015. It happened early in the morning when she was passing by to catch her train for work.

“As you can see, the bushes are very close to the road; they quickly dragged me into them. One was holding a knife. They both raped me and took my bags, leaving me there helpless. They ran in between the bushes. I had to drag myself to the road to find help,” she said.

She opened a case with the police but no arrest was made.

Last week, fed-up residents threatened to march to ward councillor Zininzi Mtyingizane’s office, but she responded by coming to them. This was after a dead newborn baby was found in the bushes. About 50 residents were present at the scene, mostly women.

Community leader Sakhumzi Magele said residents have been asking for the bush to be cleared since 2005. He said Mtyingizane had promised to do so in 2011.

“We found an old mattress inside … Lots of bad things are happening here,” said Magele.

“Two weeks ago a woman was robbed of her cellphone. The boy who robbed her ran into the bushes … These bushes are dark, even during the day, and they are growing,” he said.

In 2018 former South African featherweight champion (of 2008) Manelisi ‘Leli’ Mbilase was found “hiding” in the bushes and stoned in vigilante violence. The mob accused him of robbing two women passing by on their way to the train station. Mbilase’s unconscious body was put in a wheelbarrow and dumped next to the ward councillor’s office. He died in hospital.

Mtyingizane confirmed that residents have been complaining about the bushes for a very long time. She said residents had also tried to clear the bush themselves. She said the municipality had been slow and was working its way from ward to ward clearing bush. Ward 14 would be cleared after the lockdown.

Municipality spokespersons Bathandwa Diamond and Samkelo Ngwenya have not responded to questions sent to them a week ago or to reminders.

Previous:  Covid-19: court to rule on reclaimers’ right to work

Six arrested during clashes between SASCO marchers and police in Pretoria