“God gave us natural water and it is time we use it”, say Elandskop women 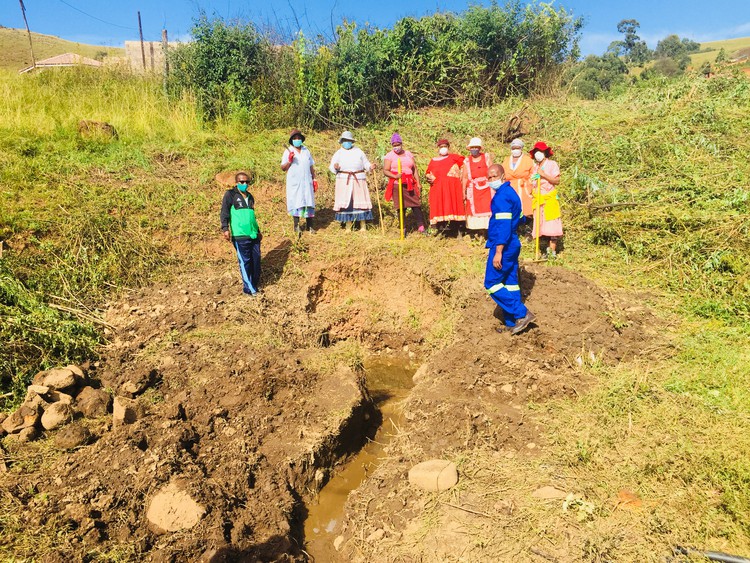 A group of mostly elderly women from KwaMnyandu near Pietermaritzburg have dug up an old spring to end their village’s water supply woes. Photo: Nompendulo Ngubane

A group of mostly elderly women from KwaMnyandu in Elandskop near Pietermaritzburg have dug up an old spring so their village can have uninterrupted water supply.

The women cleared away trees and shrubbery and some of the men in the village helped them dig and connect the pipes to supply water to many homes in ward 5.

Residents say frequent water cuts had forced people to walk far to fetch water daily. The women decided to dig up the spring after hearing about two other natural springs already in use at villages in Mankabini and Mthalane.

“God gave us natural water and it is time we use it. Our parents consumed this water and they were healthy. It’s time we pass it to the next generation,” said Nothisile Mchunu.

Mchunu was one of the grannies who spent several hours cutting. She said they are encouraging all the women to search for old springs and rework them.

“We are tired of depending on the government, knowing very well we have our own water,” said Fakazile Chamane.

She said the municipality cut off water to the communal taps at least three times a month. “Sometimes we will have no water for three weeks,” said Chamane.

“We are told to wash our hands, but if we don’t have water that cannot happen,” said Chamane.

Ward councillor Nathi Mbanjwa said the spring in Mankabini provides water to more than 200 residents and the one in Mthalane serves about 400 households. “It is a good initiative. The weight carried by the municipality for the provision of water has become heavy. This is like a campaign and we have urged all the residents in our ward who have springs to bring them back to life,” said Mbanjwa.

“The elderly and the young have joined hands on this project. What is left is for the springs in use to be fenced to avoid the cows invading them. We will again appeal to the municipality for new pipes,” said Mbanjwa.

He said the communities also needed Jojo tanks to store some of the water.

Next:  Covid-19: Teachers refuse to return to work after one tests positive

Previous:  For nine years residents have asked for criminals’ hideout to be cleared