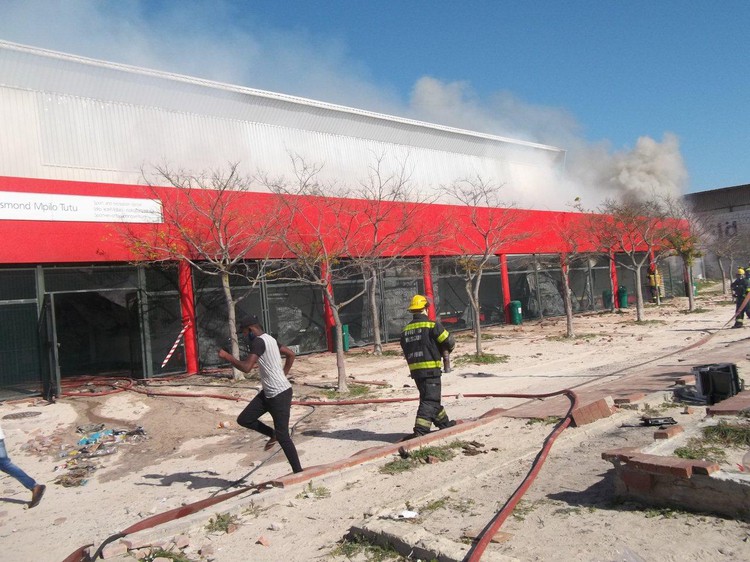 The Desmond Tutu Community Hall in Khayelitsha was gutted on Saturday during a protest allegedly by a group occupying vacant land in Makhaza. Photo: Vincent Lali

The City of Cape Town’s newly built facility meant for Covid-19 patients in Makhaza, Khayelitsha was torched allegedly by people protesting over land on Saturday.

The estimated cost of the damage caused by the fire is about R1 million, according to Mayor Dan Plato. The clinic facility had only been open for a week.

In a statement released on Monday, Plato said the facility was meant to serve vulnerable Covid-19 positive patients with treatment, testing and isolation.

“I am truly appalled by this criminal behaviour. The City will do everything we can to ensure that those responsible are brought to book. I am calling on the South African Police Service to arrest those responsible so that they face the full might of the law,” he said.

“Their callous actions have the potential to put entire communities at risk,” he said.

In another incident, protesters also torched and looted the Desmond Tutu Community Hall while protesting on Saturday morning. It is still unclear whether it was the same group who burnt the health facility, but sources we spoke to believe the group are among those occupying land near the Noxolo Xauka Primary school in Makhaza where Law Enforcement officials were demolishing structures earlier in the week.

Nosipho Qaku, a security guard at the hall, said Law Enforcement officials fired rubber bullets at the protesters to disperse them. “The protesters retreated and regrouped before returning to loot the hall. My cellphone was also stolen,” she said.

Ward councillor Danile Khatshwa said: “Because of Covid-19, I and other leaders hold Skype meetings. I will not be able to participate in such meetings because I get the internet at the hall. Residents also won’t be able to report damaged storm water drains and other problems at the hall.”

Khatshwa’s house was stoned by protesters at about 8pm on Saturday. His family has since been moved from their community for their safety.

“Thugs are now involved in the protests. They steal and damage property. My family was shocked and scared because I was not even around when the protesters tried to attack them,” said Khatshwa.

Police are yet to respond to questions on whether any arrests have been made since Saturday.

Correction: This article previously stated that the councillor’s house was burnt. His house was only stoned by protesters.

Next:  After five days without electricity residents protest at councillor’s home