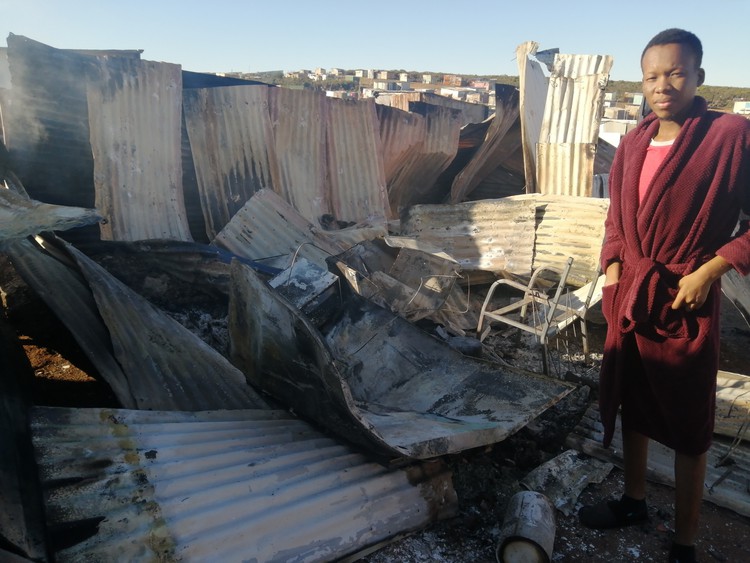 Athenkosi Bokolo is left with just the clothes he is wearing after people destroyed her shack. Photo: Mkhuseli Sizani

An organiser for the Nkandla Residents Committee, was shot and wounded on Sunday morning in the ongoing battle over electricity between residents of Nkandla, Port Elizabeth, a neighbourhood of RDP houses, and Endlovini, a neighbouring informal settlement.

The shooting followed the burning of four Endlovini shacks on Friday.

The man who was shot is known to GroundUp but for his safety police have asked that we not name him.

On Friday we reported the clashes between residents of the two communities. Endlovini residents have been connecting electricity illegally from houses in Nkandla because they say the Nelson Mandela Bay Municipality has failed to provide them with services.

The latest violence comes despite the intervention of Mayco Member for Infrastructure, Electricity and Engineering Andile Lungisa as well as police.

After they removed some of the cables they saw an improvement in electric supply which prompted them to go back on Thursday and remove all the remaining illegal connections of Endlovini residents.

But chaos broke out when Endlovini residents tried to stop them. They threw stones at each other. Some shacks belonging to Nkandla community leaders and relatives were demolished.

Endlovini residents then restored their illegal connections. The four shacks were burnt on Friday after this.

An Nkandla community leader who asked not to be named for safety said that the organiser was shot at many times. “They tried to force the door open but he prevented them by blocking the door. But they shot him from behind the door. He then managed to escape through the other door into one of the nearby houses. On his door there are about ten bullet holes.”

“We rushed him to hospital with a bakkie. He is in critical but stable condition. Doctors are busy removing the bullets in his body,” the leader said.

Athenkosi Bokolo of Endlovini who is ill says he was woken up by a mob who threw stones at his home on Friday afternoon. “I am sick and I was lying on my bed when a huge mob arrived and threw stones at my home. They were very angry, accusing my sister of being a sell-out. His shack was destroyed.

“After Thursday’s fight the residents restored their illegal connections. But my sister refused to make illegal connections again. She advised other residents to ask for permission from the RDP house owners to connect directly from their homes not from the poles. She was then accused of supporting Nkandla while living in Endlovini.”

“I am left with this gown that I am wearing. All my other clothes and my important documents were burnt,” he said.

Njabulo Boma, a community leader of Endlovini said: “A meeting was called between us and police to make peace between our communities. But we saw Nkandla residents torching our shacks. Three of our shacks including the shack of our chairperson Phindile Mashalaba were set alight.”

“The mob was coming to mine but luckily police arrived. What is even worse, I heard that there is a hit list for all the community leaders. And I am third on that list.”

“Police said we should not retaliate and burn the RDP houses because it won’t be easy to rebuild them,” she said.

Police spokesperson Captain Andre Beetge said: “Four shacks were burnt down on Friday. Due to a fight between these communities over illegal electricity connections. Then we called a meeting between the two groups to make peace with each other.”

“On Sunday at about 12am a man was shot and wounded at his home by unknown gunmen. At the moment we cannot say whether or not this incident is related to the electricity fight. That would be determined by our investigations.

“But for now the situation is tense in the area. Though there are no actions taking place,” he said.

Ward councillor Simphiwe Tyukana (ANC) said: “I called Andile Lungisa to intervene. He addressed the residents on Saturday. He then promised to send officials from his department on Monday to assess what can be done as an interim solution for electricity for people of Endlovini.”