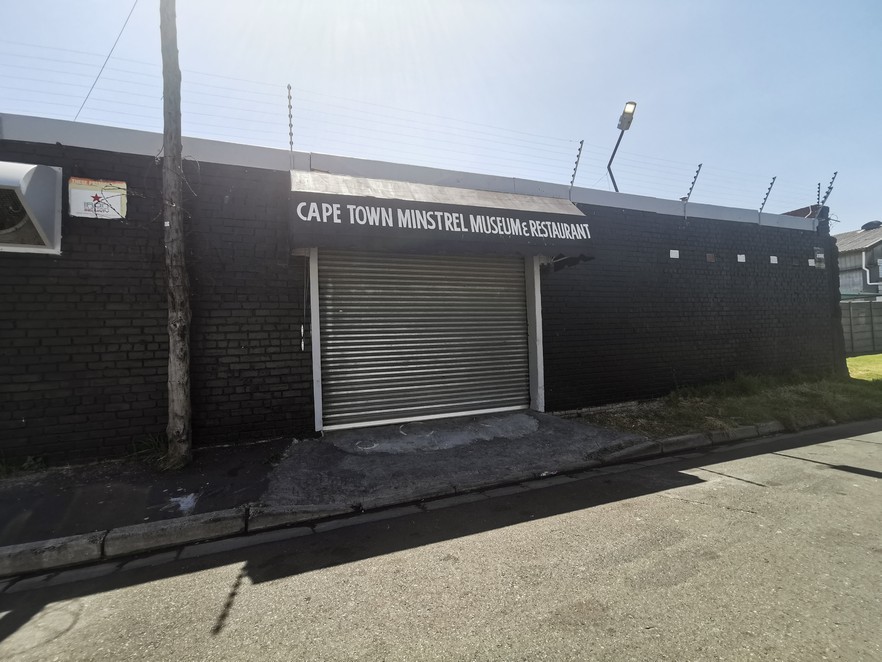 The minstrel museum may finally be opening in Cape Town seven years after the National Lotteries Commission awarded a multimillion-rand grant to establish the facility. The new Cape Town Museum and Restaurant awning only recently replaced one for the Pensyl Sporting Club. Photo: Raymond Joseph

Yet NLC Commissioner Thabang Mampane’s told Parliament in writing in late 2020 that the museum had officially opened on 24 September 2016.

She told Parliament that the museum is operating from rented premises at 5/7 Crete Road, Wetton in Cape Town. She gave a similar answer to another question from IFP MP Russel Nsikayezwe Cebekhulu.

GroundUp has previously tried to track down the museum without success. Spokespeople for other museums, as well as cultural tourist specialist guides operating in Cape Town, said they were unaware of the existence of a minstrel museum. In November 2020 eNCA also unsuccessfully tried to find the museum.

The Crete Road property is the registered address of the Cape Town Minstrel Carnival Association (CTMCA). It is also where several businesses owned by Cape Town “drug high-flyer” Richard “Pot” Stemmet are situated. These include a pub, restaurant and a factory that manufactures minstrel apparel. It is also the headquarters of the Pennsylvanian minstrel troupe, owned by Stemmet.

In September last year, Stemmet and two other men were arrested after police raided The Penn Sports Bar situated at the Crete Road premises. They seized sparkling wine worth hundreds of thousands of rand, which had earlier been stolen when the truck transporting it was hijacked in Elsies River. Stemmet, who had recently undergone bypass surgery, was arrested and released two days later after paying bail of R5,000.

The NLC failed to answer detailed questions from GroundUp about the museum.

Responding via WhatsApp, NLC spokesman Ndivhuho Mafela said: “The NLC is cooperating with the SIU investigation and therefore will not be making any comments on any project that falls under the timeline stipulated by the proclamation.”

Although Mampane told Parliament that the minstrel museum has been open since 2016, there were no signs of a museum when GroundUp visited the Crete Road premises in February 2020.

There was also no NLC signage displayed at the premises, which is a condition of Lottery funding. The only signs on the building were for the CTMCA and for some of Stemmet’s businesses operating there.

The only minstrel-related items we saw were displayed in a small hall on the premises. They included a photo collage pasted onto a cardboard backing of the Pennsylvanian troop in action and a tribute to former Pennsylvanian leader “General” Mogamat Armien “Tumbles” Salie, who died in 2015. There was also a model boat with minstrel figurines dressed in Pennsylvanian colours on its decks. 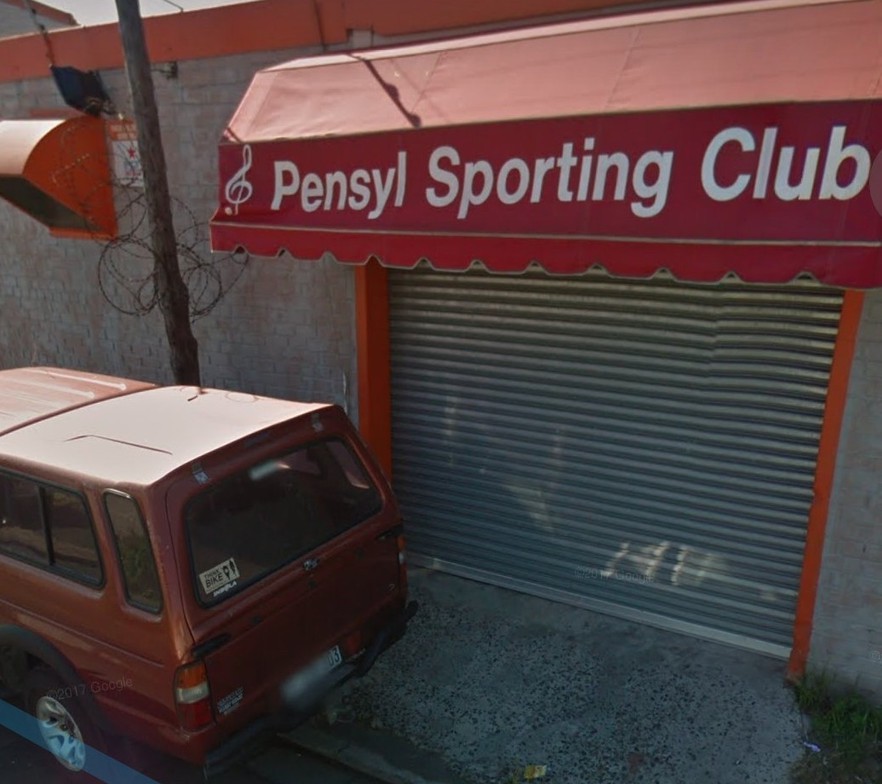 This is the current photo on Google Street View of the museum property shown in the top photo on this article. It shows the signage before it was replaced by the Cape Town Minstrel Museum. 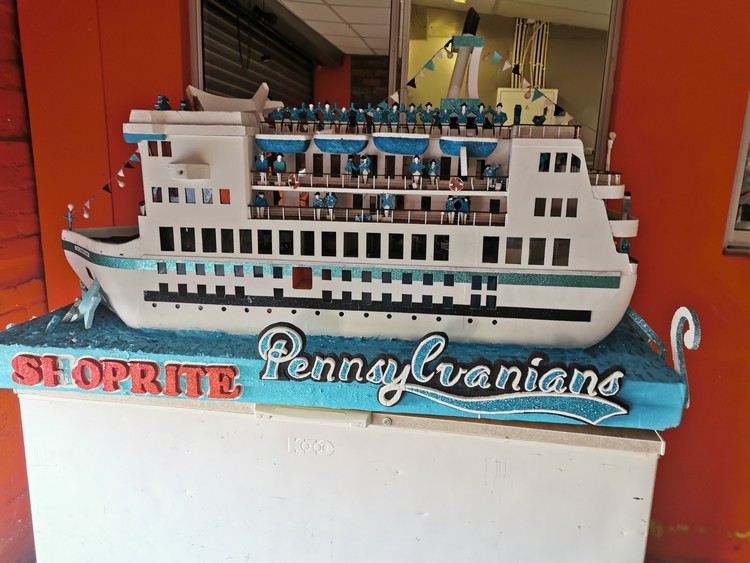 A model boat with figurines dressed in Pennsylvanian Minstrel troop colours on its decks in the hall where the minstrel museum is due to open. Photo: Raymond Joseph

Asked about the museum and how the Lottery funds were spent, a visibly angry Stemmet in February 2020 said: “Don’t come here doing other people’s business. I am warning you just leave this thing alone.” He then told GroundUp’s reporter to “fuck off” and “get out”, and instructed one of his workers to escort the reporter off the premises. The man took a photo of the reporter and his car’s number plate on Stemmet’s instructions.

Over December 2020 the Crete Road premises, situated in an industrial area where several vehicle repair shops and other small businesses operate, underwent a transformation.

The tatty exterior of the property was repainted and signage for the “Cape Town Minstrel Museum and Restaurant” was hung on the wall, and a new canopy with the same wording was placed above an entrance to the small hall where the museum will apparently be housed.

A worker at a nearby business said the premises had been repainted in December. Asked if there was a museum on the premises, she said: “Definitely not. There’s a restaurant and a few businesses, but no museum. Maybe it was somewhere else and has now moved here.”

A steel gate at the main entrance to the Crete Road premises was locked when GroundUp visited on three different occasions last week. But two people who work at businesses on the property both confirmed that a “minstrel museum” would be opened “soon”. One said he was unsure of the opening date, while the second said “maybe it will open next week”.

Stemmet headed up the CTMCA until 2016 when he resigned as a director, although two members of his family are still listed as directors of the organisation. CTMCA also received R100,000 in 2020 from a R150 million NLC Covid-19 fund intended to assist “NGOs/NPOs and NPCs struggling to stay afloat at this time”.

Stemmet, who has been described by police as a “well-known drug high-flyer”, has served time for armed robbery, and gun and drug-related offences.

In an interview with the Saturday Argus in 2015, Stemmet and Kevin Momberg, at the time both executives of the CTMCA, said that they had used Lottery funds to buy a factory that produced minstrel apparel.

Defending their right to produce the costumes, Momberg said: “Another company made the costumes years ago. The owner didn’t want to make them anymore. [The previous owner] asked Stemmet if he wanted to buy the business, and he did. He could see that Stemmet is good at business.”

In a statement last week in response to the answers supplied to Parliament by the NLC, the DA said that it will ask the Auditor General to conduct a forensic audit “into dodgy grants awarded to the Cape Town Minstrel Carnival Association”.

How much did Lottery give for a museum?

In her recent written response to the DA’s Mike Waters, Mampane said that “an amount of R5 million was allocated for the building of the Carnival Heritage Museum”.

When Commissioner Mampane supplied written answers in September 2020 to questions posed in Parliament she said that the NLC gave R27,320,758 that year for “Cape Town Minstrel Carnival Annual Workshop 2014 (not carnival costs as stated in the 2015 statement) and the Carnival Heritage Museum”.

The NLC failed to respond to a request for clarification on whether R14.32 million or R5 million had been given for the museum.

In November 2020, GroundUp reported that it was still unable to find a minstrel museum in spite of Mampane telling Parliament that the museum had been “completed” and the project “closed”. In response to the story, GroundUp received a lawyer’s letter accusing us of defaming Mampane and demanding an apology and the retraction of the story.

The NLC had previously replied to detailed questions about the museum with a vague response. But Mampane’s lawyer said that had GroundUp asked, we would have been “advised that the funding of the Cape Town Minstrel Carnival Association (the CTMCA) by the NLC included amongst others the purchase of land and building for purposes of establishing a museum, buses and various machinery. This was confirmed through an audit conducted by an independent audit firm.”

The letter continued: “The auditors attended to a physical site inspection to verify the property, plant, equipment, and that they match the funding proposal and approval. They also inspected motor vehicles, land and building and other assets relating to the purchases made by the CTMCA. The auditors found that the purchases made by the CTMCA were in line with the approved budget as per the service level agreement and physically verified the existence of the property and the land, and other items, which matched the approved budget.”

“In this regard, had you taken reasonable steps to verify the information, you would have established the true facts relating to the funding by the NLC to the CTMCA,” the letter said.

GroundUp’s lawyer responded to Mampane’s lawyers in November, requesting details of the property, including its address and the purchase price. Our lawyer also asked for details of vehicles and equipment that were purchased with Lottery money. There has been no response so far.

Tracking down the property the Commissioner told Parliament about

We spent considerable time trying to trace the property that Mampane said had been purchased with Lottery money to build a museum without success. It is not the same place in Wetton where the museum is set to open. And it has never been a museum.

We were finally able to find the property after Mampane, in her response to Parliament, said it was located in Schaapkraal on the Cape Flats. She also supplied the erf number for the property, adding that it had since been sold.

Deeds Office records show that the CTMCA bought the Schaapkraal property in 2014 for R1.7 million and sold it for the same amount in 2019. Using the erf number we were able to find a physical address for the property.

But finding the property was difficult because it is not listed on Google Maps. We finally tracked it down to a semi-rural residential area in Schaapkraal. It is situated at the end of a dead-end gravel road in an area where properties are an acre or more in size. Many of the properties have very large, in some cases ostentatious, modern houses on them.

The former minstrel property is hidden behind a high, unpainted vibracrete wall topped by electric fencing. Visible through a small opening in the high, solid gate is a large piece of land stacked with bricks and other building material. There is an old house in the far corner of the property.

A nearby neighbour, who asked not to be named as he was concerned for his safety, said that residents had heard a few years ago that the property had been bought for a minstrel meeting place.

Some residents objected to this, he said: “People said they did not want it. Everyone was worried about buses and other traffic invading our quiet road.”

Another resident, who also did not want to be identified, said: “They raised the vibracrete wall but did not seem to do much else. There were several people living on the property but they did not create any disturbance. I think it was used to house some workers,” he said. “On a few occasions I heard minstrel music but it never became a problem.”

Next:  Scores of beneficiaries in Pietermaritzburg rush to renew lapsed disability grants