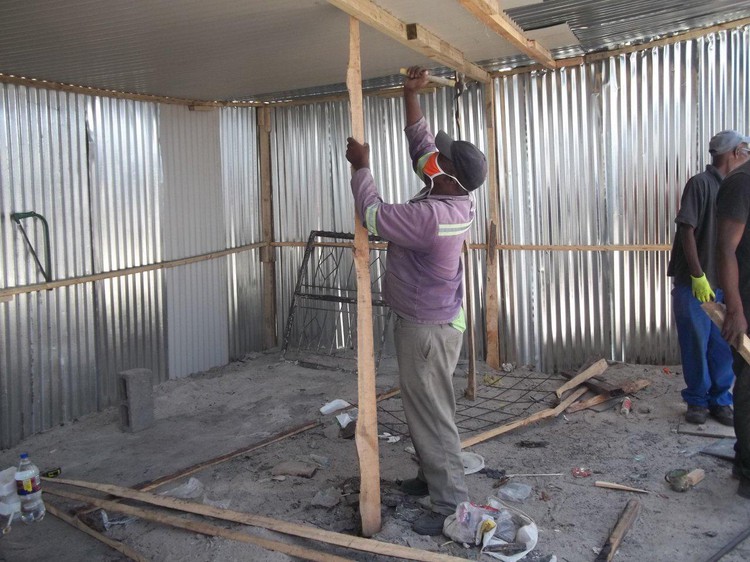 Resident Bonisile Giba rebuilds his shack with the material purchased through donations by other shack dwellers in the area. He was among about 300 people who were displaced by a fire in Taiwan informal settlement in Khayelitsha, Cape Town on 1 January. Photo: Vincent Lali

Members of the Khayelitsha Community Action Network (CAN) are pleading with the City of Cape Town to help the 300 people in Taiwan informal settlement whose homes burnt down on New Year’s Day.

Last month, the City said in a statement that it would no longer be providing fire and flood kits to residents outside of declared disasters.

Since the devastating blaze, other shack dwellers have been donating the little money they have to help the affected households.

Community leader Malibongwe Noziyamba said residents whose shacks were not destroyed have been donating what they can to buy building materials like poles and nails to help the fire victims rebuild their shacks.

“After the fire, we noticed that some unemployed residents don’t even have one pole to start rebuilding their homes and sympathised with their plight. The shack dwellers contribute whatever amount of money they have towards the relief fund,” he said.

This despite most people in the area being cash-strapped during the lockdown, said Noziyamba. He and other leaders purchased 150 poles and building nails which they handed over to unemployed fire victims on Saturday. Other donations included pots, dishes and clothing to the fire victims.

“We expect the fire victims to reciprocate our kindness and buy us building material if our shacks also burn. We support each other because the government no longer helps fire victims,” he said.

When GroundUp visited the community on Saturday, Bonisile Giba was rebuilding his shack using the donated material. Giba said he has been sleeping outside for seven days.

Community leader Sisanda Nyawuza said they wanted the fire to be declared a local disaster which means the City would have to provide assistance.

Thandi Jongilanga said the fire victims have not yet recovered from the trauma of losing all of their belongings. “When we see or smell smoke, we frantically search for its source,” she said.

“When it’s summer time, it’s fire time for us. We will experience another fire disaster if our shacks are still closely clustered,” she said.

Jongilanga said some shack dwellers will find that their shacks are no longer standing when they return from their families in other provinces.

“We phoned some residents to inform them about the fire. Those who were not aware about it are shocked to find that they have lost all their possessions,” she said.

Previous:  Covid-19: Our grimmest day yet