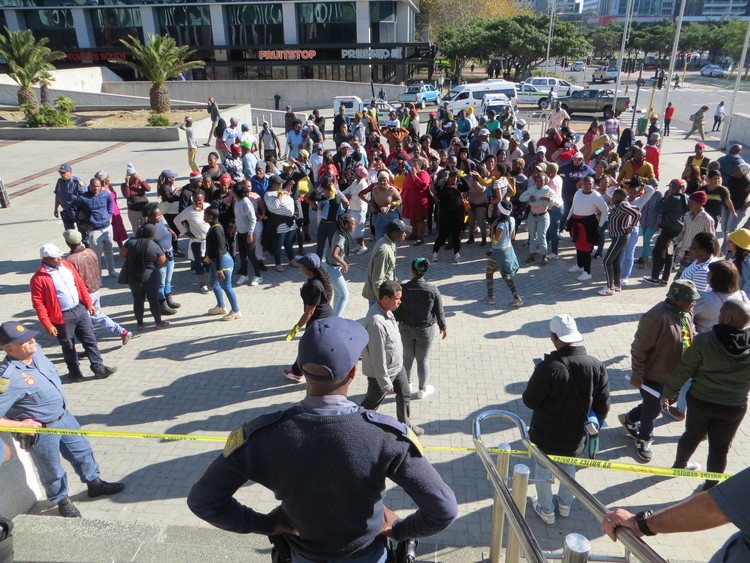 About 150 Mfuleni residents marched to the Cape Town Civic Centre on Thursday to demand title deeds, that hostels be renovated and that newly formed settlements be serviced.

“The mayor promised to prioritise service delivery in poor areas while he was campaigning during the local government elections,” said community leader Thembani Thaka. He said hostel dwellers wanted title deeds so that they can formally own their homes.

Thaka said most hostel dwellers moved there in 1972. “The Western Cape Government promised to give them title deeds in 1996, but the promise has not yet been fulfilled,” said Thaka. “These hostels are crumbling and are therefore not suitable to live in.”

Thaka said people living in formal houses had frequent power outages because the system was overburdened with illegal connections from the surrounding informal settlements. “The power outages make their food rot in fridges and damage electrical appliances.”

Community leader Mzi Sofika said they also wanted the City to recognise newly established informal settlements and to provide them with basic services.

Shack dweller Phakama Matiwane said he wanted the City to install toilets, taps for water and electricity in Malgus Camp, an informal settlement. “Because the City doesn’t supply us with electricity, we steal it from poles in neighbouring formal areas,” he said.

“The illegal connections generate tension between us and our neighbours. We will end up killing each other one of these days if the City doesn’t install electricity,” he said.

Vukile Tyilana said shacks near the canal bordering the informal settlements of Covid Village and West Bank needed to be relocated. He said the recent floods swept away some shacks.

The group handed over a memorandum of demands to James Styan, Chief of Staff in the Mayor’s office. The protesters gave the City seven days to respond.