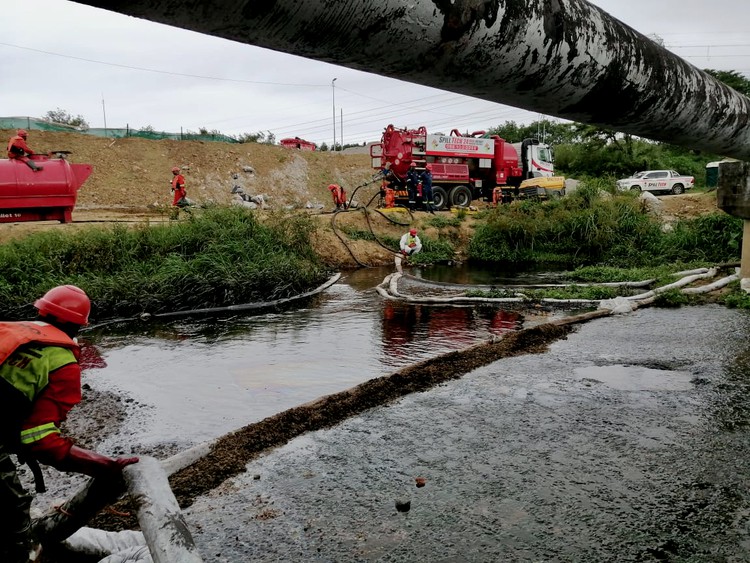 Transnet Pipelines has begun to clean up the crude oil spillage in the Bellair area, Durban. Photo supplied

Crude oil has been spilling into the Umbilo River from a Transnet pipeline in the Bellair area, Durban. The Umbilo River flows through various communities and a nature reserve before reaching the Durban harbour.

Pollution from industry and high levels of E coli bacteria in the river had already raised alarm among environmental activists before this latest incident.

Transnet Pipelines (TPL) say the spillage has been contained.

The South Durban Community Environmental Alliance spokesperson, Desmond D’Sa said it will take days or even weeks to clean up. “This is a massive spill … This is not only a tragedy for humans but for the environment and marine life as well,” he said.

According to D’Sa, residents complained of an oil smell last Thursday. Transnet commenced its clean-up on Tuesday.

“We were informed in 2008 that this pipeline was going to be closed but we see this is not the case. No wonder we have the leak,” said D’Sa. He said the pipeline was corroded and was supposed to have been sealed with concrete.

He said the Green Scorpions should send a senior team to investigate.

But Transnet spokesperson Saret Knoetze said the spill was caused by an attempted theft, not a burst. The resulting leak has been plugged and full repairs will start.

“As a precautionary measure, no fishing will be permitted in the harbour area for the next seven days. Cleaning and rehabilitation of the stream between the source of the spillage and the harbour has commenced,” said Knoetze.

Knoetze said that in the current financial year Transnet pipelines had over 80 incidents of fuel theft and tampering with pipelines. “The costs of these incidents are significant and include the cost of product, repairs and environmental rehabilitation,” she said.

Sandra Streak from the Umbilo River Community said, “I truly hope that a proper cleanup and rehabilitation is done. This incident is going to have terrible consequences to the health of the ecosystem of the Umbilo River and the Bayhead Natural Heritage site and will probably negatively affect the blue flag status of Durban’s beaches.”

“We are working with all role-players to implement spill containment measures to prevent damage to the environment,” she said.

“Critically, we are calling upon communities to work with law enforcement agencies to ensure that those who are responsible for vandalising Transnet pipelines are brought to book. As it has been pointed out in various platforms, Transnet operates and maintains a network of 3,800km of high-pressure petroleum and gas pipelines from Durban to Gauteng across five provinces. We have a responsibility as the people of this province to ensure that we protect this valuable infrastructure which is critical for our economy,” Dube-Ncube said.

Knoetze said, “We appeal to residents or any persons living near the pipelines or driving past, especially at night, to report any suspicious activities, bakkies, fuel tankers in the area of the block valve chambers or near our pipeline markers … The toll free number is 0800 203 843,” she said.

Previous:  SASSA determined to get back “every cent” owed by Cash Paymaster Services